Win tickets to see The Empire Strips Back in Melbourne

To enter simply email: [email protected] by midnight on Monday 9th June with the following:

THE EMPIRE STRIPS BACK: A Star Wars Burlesque Parody 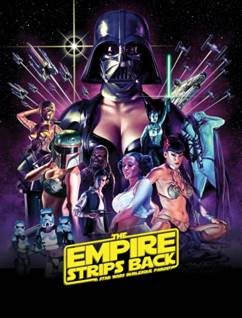 A long time ago in a galaxy far far away….

In a show like no other, The Empire Strips Back takes the classic characters from the beloved Star Wars film franchise and drops them into the world of Burlesque. After sell-out tours of the original production, Star Wars Burlesque, the producers are back to meet the audience demand with an even bigger and better production, playing at the Palais Theatre, Melbourne on Friday, 20 June as part of the Australian Tour 2014.

Empire Strips Back is designed to indulge audiences in a sci-fi fantasy of intergalactic proportions – George Lucas could never dream that his characters could be used in such a manner, guaranteed to get some hearts racing with The Force.

In 2011 Russall S. Beattie created the first run of Star Wars Burlesque in Australia. It was booked in a 150 capacity room, with the intention to run for 3 nights only. Those three nights sold out in record time, and the show has gone beyond all expectations. Since then it has travelled the country and has delighted audiences of over 20,000 people. Still the show was designed for a small stage, and feeling like they had never taken full advantage of a full theatre stage, nor realised the ideas that were just a pipe dream for the original show, the producers destroyed all the props and costumes in May 2013 and started rebuilding a new show from scratch: The Empire Strips Back: A Star Wars Burlesque Parody.

Empire Strips Back is firing on all cylinders to exceed the expectations from the previous production, with a full size remote controlled R2-D2 by the same people who worked on the Star Wars films and custom made character masks to bring to life characters that have only ever existed as puppets or CGI.

“We’ve taken everything up a notch, not just in scale but also in quality, everything is as close to the movie version universe as possible, from a full size R2-D2, casting a Han Solo in Carbonite, and having a 7 foot Wookiee,” said Creative Director, Russall Beattie.

Why go to that much effort for a Burlesque show? It’s important to the cast and crew that the show feels like an extension of the Star Wars universe, The Empire Strips Back taps into what makes these films special and stand the test of time, the sense of wonder – all with tongue firmly in cheek. 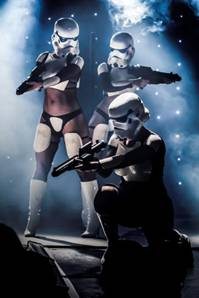 ..an extravagant, fantastical melange of burlesque stylings performed exquisitely by the ladies – good adult fun taking suggestive subtexts of the film and running a mile with them.. – CANBERRA TIMES

..a most saucy caricature – the bawdy nature of burlesque makes a perfect match for the pop culture icon that is the world of Star Wars.. – MUSIC FEEDS

The Empire Strips Back – A Star Wars Burlesque Parody

Australian Shakespeare Company Present As You Like It [VIC]