Like to win tickets to see Shadowland in Sydney or Canberra?

We have a double pass for the opening night of this amazing show for the following cities:

Entries for Melbourne, Brisbane, Perth and Adelaide have closed.


To enter simply email [email protected] and include the following:

Entries close at midnight on Sunday 18th May. 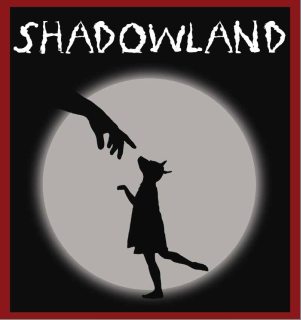 Shadowland, the ground-breaking new performance by internationally acclaimed dance troupe Pilobolus, is best described as part shadow act, part dance, part circus and part concert. For the first time in Australia, with more than 100 choreographic works performed in over 64 countries, Shadowland will be performing in Melbourne, Brisbane, Sydney, Canberra, and Perth from May – July 2014.

Shadowland, the ground-breaking new performance by internationally acclaimed dance troupe Pilobolus, is best described as part shadow act, part dance, part circus and part concert.For the first time in Australia, with more than 100 choreographic works performed in over 64 countries, Shadowlandwill be performing in Melbourne, Brisbane, Sydney, Canberra, and Perth from May – July 2014.

As the first theatrical event of its kind to tour the globe, Shadowland incorporates multiple moving screens of different sizes and shapes to create an evening-length performance that merges projected images and front-of-screen choreography. 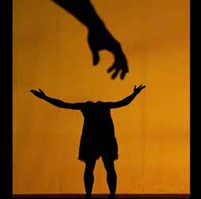 The story is a surreal experience of a young girl’s sensational world as she comesof age. Created in collaboration with lead writer for the popular animated series SpongeBob SquarePants Steven Banks, Shadowland is a universal and intimately portrayed experience that is both intensely dramatic and comedic.

It is set to a rhythmic original score by the popular American musician, producer, and film composer David Poe, whose poetic work for Shadowland ranges from ballads to hard-driving rock numbers that lift the audience out of its seats. His much-loved songs illuminate the themes and visuals of this fascinating story and world.

The physical vocabularies of Pilobolus works are not drawn from traditions of codified dance movement but are invented, emerging from intense periods of improvisation and creative play

Shadowland was conceived and created by Pilobolus after several years of experimentation of the short shadow form. The result is a mixture of Pilobolus’ signature style and innovative new forays into new media. Indeed, from an artistic standpoint, the new work incorporates Pilobolus’ legendary approach to modern dance combined with high-energy, fast-paced, multi-media innovation.

Known for its collaborative choreographic process and a unique weight-sharing approach to partnering and sculptural creations, Pilobolus discovered this new medium for playing with lightness and dark when it developed advertisements for Hyundai and then performed at the 79th Annual Academy Awards in 2007, creating iconic images of the films nominated for Best Picture. 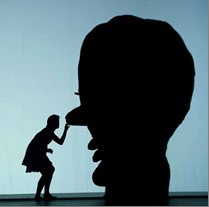 The story of Shadowland, Night. A small house on a small street. A teenage girl prepares for bed. She longs for independence, but to her parents she is still a little girl. With nowhere for her thoughts to go but into her dreams, she falls asleep only to wake to something lurking behind her bedroom wall — her shadow. The wall of her room suddenly starts to spin, trapping her on the other side. Unable to escape, the girl sets off on a journey of discovery, going deeper and deeper into Shadowland, looking for a way out. Strange creatures appear along the way — at once comic and evil, threatening and seductive — crazy chefs try to cook her in a soup, hunch-hand monsters threaten to crush her, a giant hand turns her into a dog, and a centaur finds a way into our dog-girl’s heart. With the fluid logic of a dream, the grace of an acrobatic dance, the humor of the best cartoon, and the heart of a love story, Shadowland celebrates the strange transformative power of the dark to show us who we are in unexpected and thrilling ways.

Pilobolus is a modern performance company, founded in 1971, that to this day wears its revolutionary stripes on its sleeves. In keeping with the energy and spirit of its biological namesake—a phototropic fungus that thrives in farmyards—the company has continued to grow toward the light, expanding and refining its unique methods of collective creative production to assemble a repertoire of over 100 choreographic works. It teaches its group-based creative process to performers and non-dancers alike through popular, unique educational projects and programs. While it has become a stable and influential force in the world of dance, Pilobolus remains as protean as ever, looking forward to the next 40 years of collaborating on the future. In 2007, the creative services team at Pilobolus created and presented six acclaimed performances during the 79th Annual Academy Awards, as well as producing a series of original segments for The Oprah Winfrey Show and LateNight with Conan O'Brien.

After its renowned shadow theatre performance on the 79th Annual Academy Awards, Pilobolus embarked on the creation of an evening-length movement-theater piece titled Shadowland. It was created in collaboration with Steven Banks, head writer for the hit Nickelodeon Show SpongeBob SquarePants, and singer-songwriter David Poe, who wrote a rollicking score. To date, Shadowland has performed over 200 shows world-wide, and is currently touring extensively around Europe.

Here's what the critics have said:

Once again, Pilobolus demonstrated that it is a law unto itself, a singular theatrical universe. – New York Sun

A virtuosity of unwavering energy, a taste of perfection which demands admiration. – Nouvel Observateur

At various points in a performance of Pilobolus Dance Theatre, you forget what you’re looking at; the dancers move so skilfully, so symbiotically, that they cease to resemble people at all. – The New Yorker

This is an amazing spectacle of inventiveness – Le Parisien

The real reason Todd McKenney is doing Anything Goes