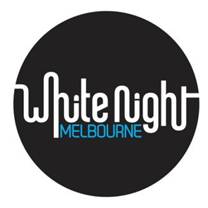 Submissions are now being sought for WNM 2015.

Visit www.whitenightmelbourne.com.au to register your interest.

It was announced today that Australia’s most celebrated cultural event White Night Melbourne will return on Saturday 21 February, 2015 and the call for expressions of interest is now open.

From 7pm on Saturday 21 February through to 7am on Sunday 22 February 2015, Melbourne’s city streets, major cultural institutions, public spaces, gardens, landmark buildings and laneways will once again host Australia’s edition of this global phenomenon.

Artistic Director Andrew Walsh said “The third iteration of White Night Melbourne will be a celebration of Melbourne’s artistic links to the world. The combined talents of local and international artists will transform our city into a magical experience for all to behold, as we continue to create a ‘night like no other’. White Night Melbourne has quickly become a key event on the Victorian Major Events calendar, as a must do experience and whole city celebration. We are excited to announce the commencement of the expression of interest process, where we encourage all artists, designers, performers, as well as businesses and venues, to submit works and ideas for programming in the 2015 event. They will be joined by leading Melbourne and International artists, all coming together for just one night of art and culture across the city of Melbourne."

Melbourne’s cultural institutions – including Arts Centre Melbourne, the Australian Centre for the Moving Image, the National Gallery of Victoria, the State Library of Victoria and Melbourne Museum will once again take part in White Night Melbourne with special programmed events planned for 2015. Minister for Tourism and Major Events, Louise Asher said, “In two short years, White Night Melbourne has staked its place as a significant major cultural event in Australia. The event has already delivered a strong result for tourism, economic return for city traders and hoteliers and has provided an opportunity for the local and international creative community. White Night Melbourne is an excellent opportunity for artists, businesses and the community and I encourage all to get involved.”

White Night Melbourne is a State Government of Victoria initiative inspired by the international network of Nuit Blanche cities around the world. It showcases Melbourne’s music, art, theatre, sport, fashion, film, design and performance over a 12 hour period from 7pm Saturday 21 February to 7am Sunday 22 February 2015.

‘What the all-night arts festival did repeat was atmosphere. It was again distinguished by the sheer scale of participation; the spirit of curiosity and childlike enthusiasm it inspires in the crowd. It made you proud to be living in such a vibrant and cosmopolitan city.’ – The Age, 24 February 2014.

‘…a dusk-to-dawn spectacular of illuminations and projections that saw the CBD come alive with art’ – The Australian, 24 February 2014.

Artists, performers and organisations can register their interest to participate in White Night Melbourne 2015 at www.whitenightmelbourne.com.au.

Werribee to be transformed into dream-like creative hub