What happens when an Oscar winner does a musical? 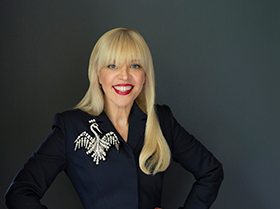 From the moment you walk into Melbourne's Her Majesty's Theatre, the detail is evident. From the brightly coloured seats to the promotional posters on the walls there is an immediate wow factor impact for the audience. It was the same in Sydney and will no doubt be the same when Strictly Ballroom moves to Brisbane in September. It is a rare show when a piece of set receives applause, but on opening night when the iconic Coca Cola sign descended the audience cheered and burst into applause. 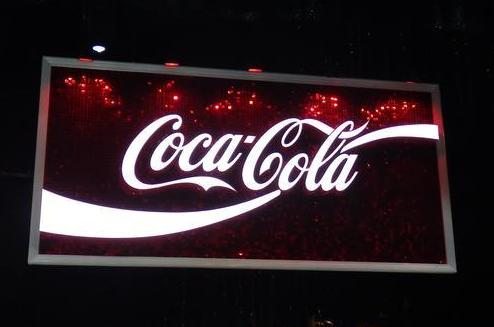 Last year I had the opportunity to have a back stage tour of Strictly Ballroom and experience the elaborately detailed sets and the exquisite costumes up close. They really are in a class of their own and are incredibly impressive – but not just to the audience; the cast are also in awe of the attention to detail and the level of involvement by CM herself. CM is of course Catherine Martin, the wife of Baz Luhrmann. If you speak to Luhrmann about his work he is very quick to point out the fact that everything he does is a team effort with his wife – together they are just known as Baz and CM. They are also quickly acknowledge they have teams of people working with them to create what they do. 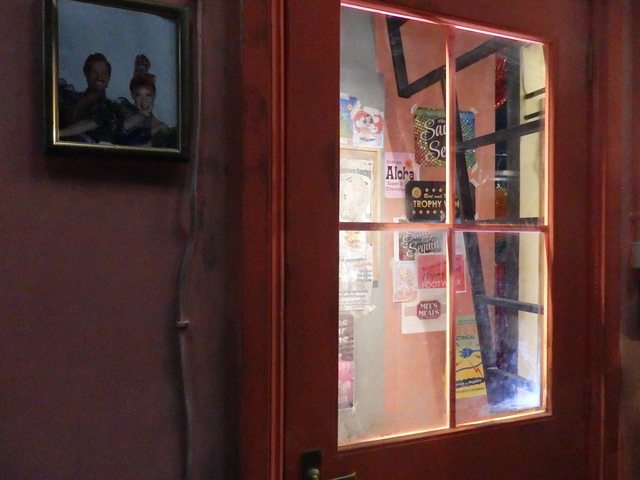 Inside the Kendall studio 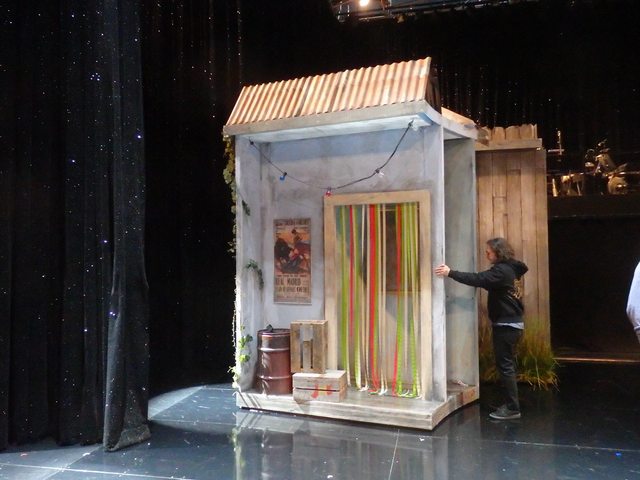 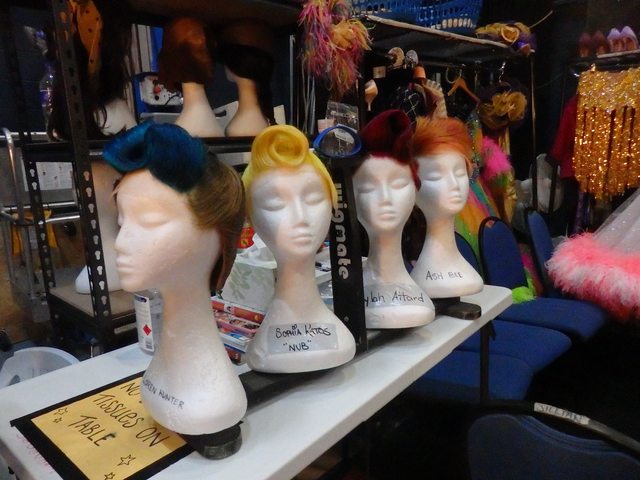 The wigs are an important part of the costume design

Yet, despite the very gracious comments from Baz and CM about their teams, the cast all know just how much input, energy and actual hands on work has come directly from CM herself. During the lead up to the Sydney opening, the cast would turn up for a rehearsal to discover something new had been added to the set overnight by CM. The set was constantly changing and evolving. Some changes were a matter of necessity. When a run though of the show resulted in the the stage covered in feathers as if a flock of ostriches had been massacred, the costumes had to be changed with more resilient feathers. CM is quite in awe of her wardrobe team who ensure the costumes remain looking stunning despite the beating they receive each performance. 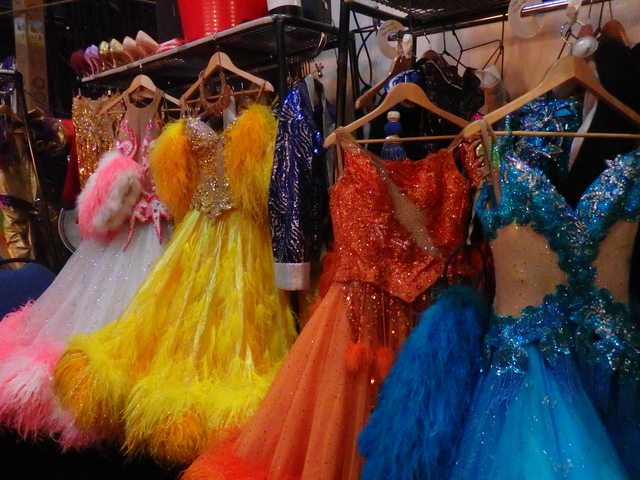 The vibrant costumes – beautifully sequined and adorned with crystals. 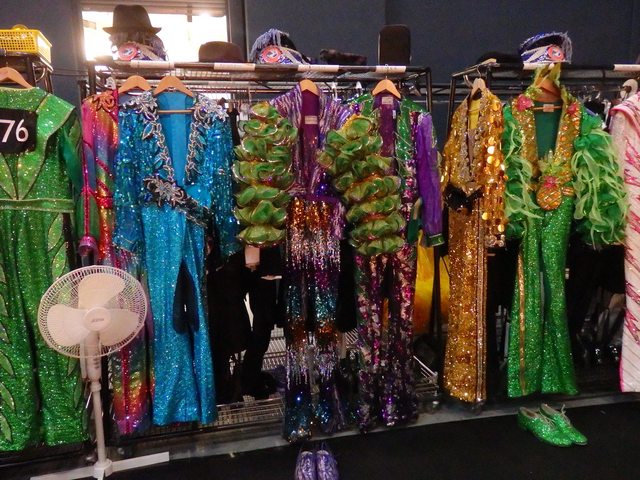 The men's costumes are just as elaborate. 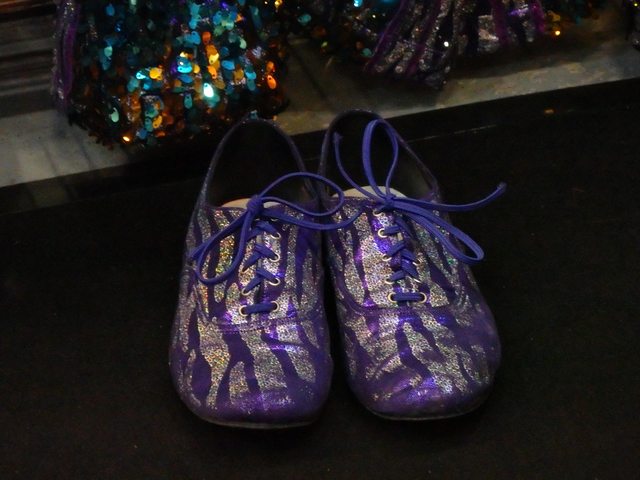 With Strictly Ballroom now playing in Melbourne I asked CM if she was still making changes? 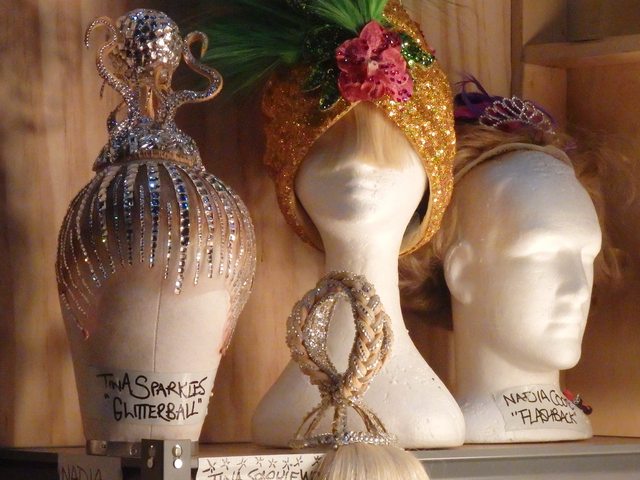 Some of the headpieces. 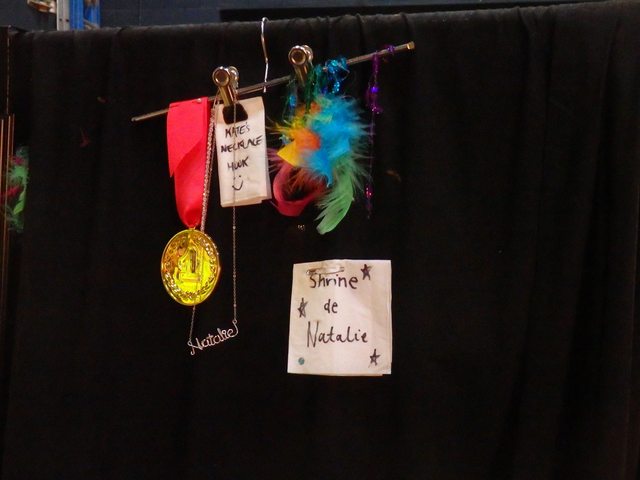 “I think the thing is about detail, which very much comes from Baz's ethos – that authenticity, details, research, layering and I think it really works two fold. Number one –  It works from the perspective that the actor feels reinforced. They actually think that you're investing as much of your energy in to the show as they are and they feel supported. It's hard doing eight shows a week and it's great to see little things that give you some energy.

“And also (number two) for the audience who may not see all the individual pieces of details, but it's like the sum of the whole is greater than the individual parts. So that you, as an audience, feel the level of attention to detail and care – even if you're not reading there are Spanish tomatoes in the Toledo Milkbar window or whatever.

“I could keep doing that level of detail – and we keep doing it – and I'm sure things will evolve even during the (Melbourne) run. We try to keep in constant communication because it's living and breathing and you need to support those people who put their energy into the show every night.”

This support is certainly felt by the performers. Twelve months after the first opening in Sydney, there are yet to be any cast changes. The show was rewritten for the Melbourne season and this new and improved show is receiving rave reviews from audiences.

The realism is important to Baz and CM – it's what they do. The old film projector used by Doug Hastings does actually work. The fish in the tank do actually move. There is steam rising from the large pot on the stove. These can be seen by the audience. But there are details the audience probably won't see – the "Barry Fife sucks" comment scrawled on the wall, the photos in the Kendall studios, the old vinyl records …  You really need to return to see Strictly Ballroom a second time just to fully appreciate the intricacies of the sets and costumes. 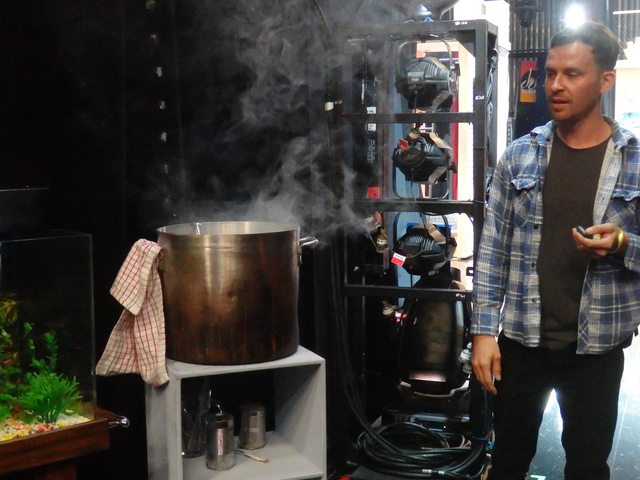 The fish move and the pot steams. 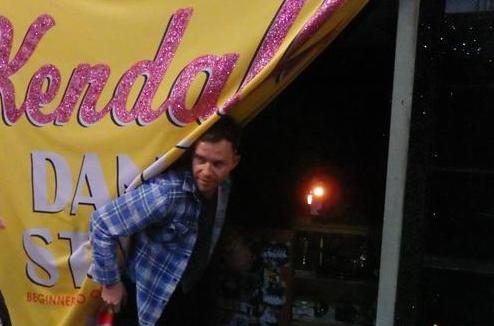 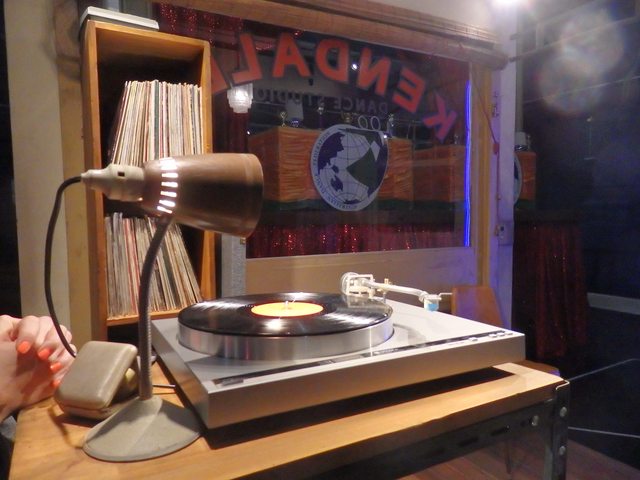 While the sets are full of details that won't be fully appreciated, or perhaps even seen, by the audience, the costumes, on the other hand, will create a significant impact even to those sitting in the very back row. Getting up close to see and touch these exquisite costumes you can really appreciate  just how impressive they truly are. I asked CM about the experience of designing these costumes. 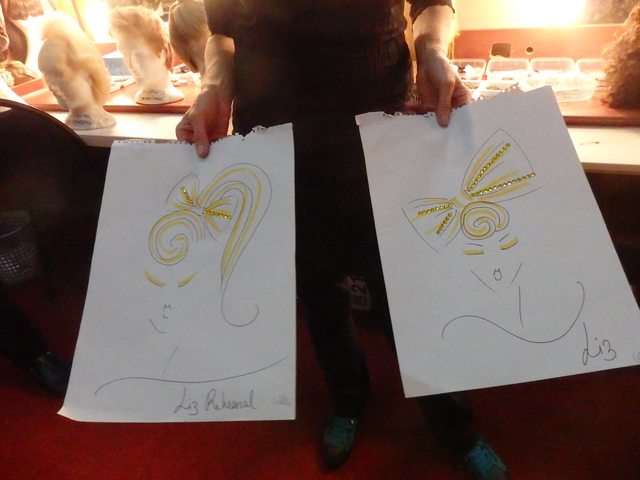 Some of CM's original design work. 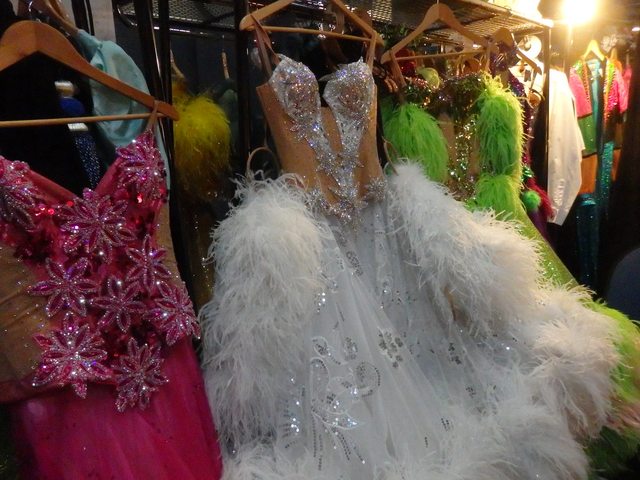 The gowns are exquisite. 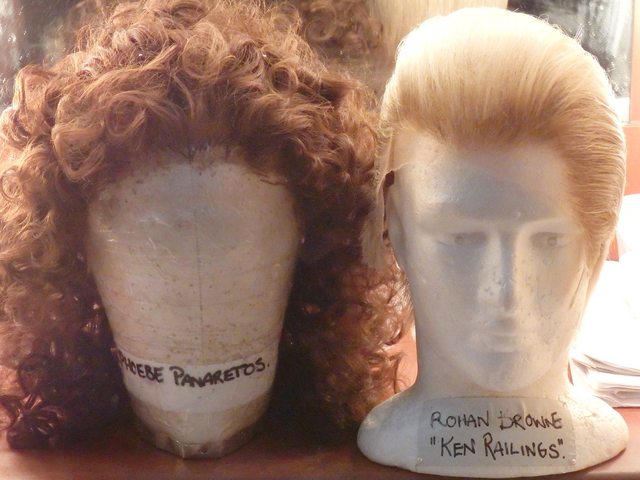 The wigs were made in Australia.

“I loved doing it. It was one of those things where there were no holds barred and you could buy fabrics that you would never, ever buy in a million years, and never again, so I absolutely loved it.”
As CM explains, it allowed her to “just go crazy” with items bought from places like Spandex World.

“Yes, there is a store called Spandex World,” she adds with a laugh. 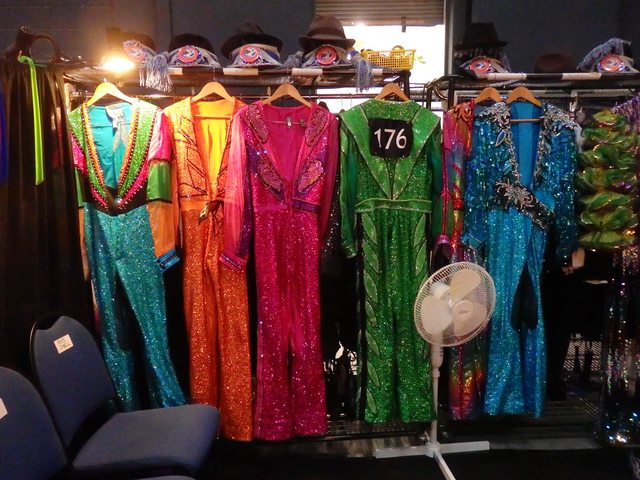 Watching the performance of 'Time After Time', the stunning costumes seem to almost float through the air. It's not surprising this costume design is the work of an Oscar winner. 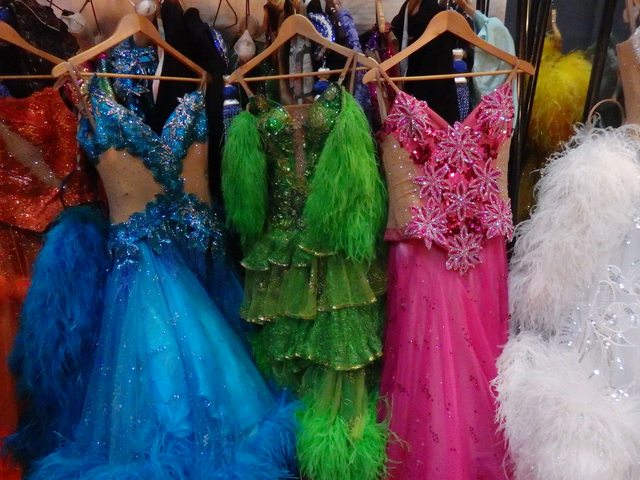 Catherine Martin is the only Australian to have won four Oscars – those highly coveted Academy Awards – for both costume and production design, teaming up with husband Baz Luhrmann for the movies Moulin Rouge and The Great Gatsby. I asked if being a four time Oscar winner adds any extra pressure or sense of expectation by audiences?

CM replied, “Every day starts at 6am and trying to get my children to eat their breakfast and get them to school and starting a new ambitious project or going to parent-teacher interviews and hoping they haven't been too delinquent at school. I really, very rarely, think about the expectations people have because I don't really have time to.”

It may be some time before we see a production with such incredible sets and costumes and it's worth a ticket to Strictly Ballroom just to experience these alone! 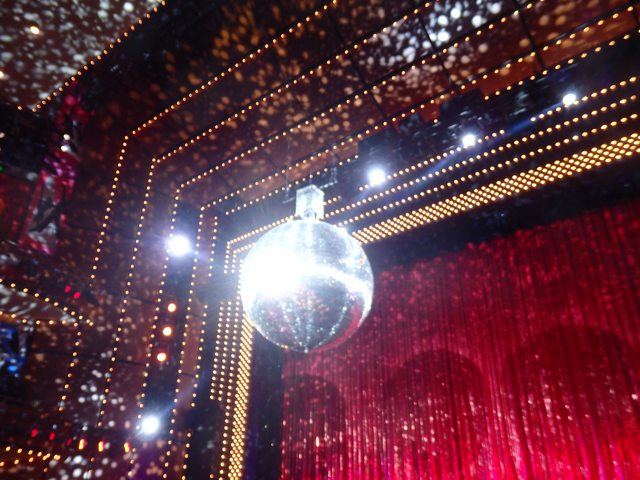 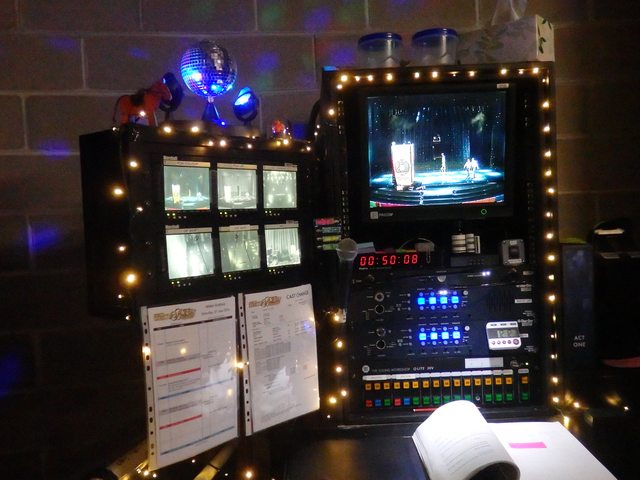 Everyone loves a mirror ball … even the stage manager has their own personal mirror ball.

Strictly Ballroom is now playing in Melbourne at Her Majesty's Theatre before moving to Brisbane in September.

Baby Boomers Under The Microscope In Ella Caldwell’s First Acting Role For 2015.