Welcome to the world of Fringe Burlesque and Cabaret

Take a walk down a dark corridor, into a dark room. Its hot and heavy, the smells of
wine perfume and cigarettes waft around you as you take a seat on a red velvet chair.

A drink is placed by your hand, the ice tinkling its own tune below the thump and jangle of the piano, and a bead of condensation slides down the glass, glimmering and reflecting the candles and soft glowing footlights on stage. The light dims still further, and the hum of voices shrinks to a murmur, punctuated by a cackle of laughter from the drunk man wearing lipstick in the front row. The piano fades into a hypnotic vamp and as the plush burgundy curtains clumsily swept aside, the excitement in the hot and steamy room can be felt like a jolt from an electric fence, even the drunk man in the front row wearing lipstick quiets himself.

A buxom woman wearing nothing but a corset and knickers strides into the spotlight. Her white skin glowing under the black of her hair. In the bright white of the spotlight, her eyes seem black as well, and she stares each and every member of the audience down. "Who here tonight is a cabaret virgin?" she purrs in a heady Russian drawl. You shyly raise your hand, cold wet glass clutched in the other. "Well my darlings, you are in for a treat tonight. Don’t worry, I'll take care of you. In a very naughty way…" She pauses and looks down the blouse of a young woman in the second row. "Oh, I like your boobs, they are very big and pretty, would you like to have a drink after the show?" The young woman looks excited and terrified at the same time, shaking her head and giggling. "I'm going to pop your cabaret cherries tonight my dears, we will take you on a journey and all of us will end up with very little clothing!" She laughs. "I am your MC for the evening, so please hit your hands together and make big clapping sounds for our first act!"

The MC was right, you do go on a journey. And it is just as terrifying and exciting and hilarious as the young woman in the second row's face suggested. Having seen Cabaret with Liza and the various stage productions that have been on around town, you thought you knew what you might be in for. You were wrong. It was so much better and so much worse than any expectation you could have conjured up. The show was tender and rollicking, seductive and brutish. Often you laughed simply because you were so uncomfortable that there was no other option. It was offensive and clever, merry and sad. A lot of the time, it didn't make sense right until the end. Your thoughts were being pulled along in a current of political satire and breasts. Sequin adorned buttocks and distasteful facial hair thrust and hinted at so many ideas that it made your head swim, which you were sure had absolutely nothing to do with that third drink that you just devastated. Uncomfortable titters became laughs from deep in your belly. Sympathy became an emotional dagger that twisted in your guts and brought tears unashamedly spilling down your cheeks.

An audience of strangers, over the space of an hour, maybe two, became your closest companions, souls searching for the same thing as you.

You eventually stagger into the cold night air, that feels like a slap in the face. Eyes watering from the bright street lights and cold air, you half expect that sexy and dangerous MC stroll out of the shadows and draw you back inside for more debauchery. You feel wrung out, and elated. Energised, inspired and exhausted. Unlike the old favourites, musicals tired yet well loved, cabaret and burlesque threw new and exciting ideas none too gently into your head. Fringe theatre was challenging in a way you never thought it could be, abstract and familiar at the same time. It was rough and offensive but so seductive, like a drug, you just want more and more until it
overwhelms you and spills over onto the street. There are now two options, go out and keep drinking, find fine company and maybe the whirling chaos of colour and sound and movement in your head will coalesce and make a modicum of sense to you; or go home to bed and take another rollicking and bittersweet journey into your dreams. 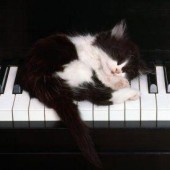