Time is a Traveller – David Harris tells his story.

Harris first emerged onto the theatre scene in the ensemble of The Boy From Oz. He wasn't trained as performer – he's not a graduate of WAAPA or VCA or BAPA or NIDA or anywhere else. He'd never considered his singing as anything more than a hobby. He did start out at university, but in an architect degree; Harris was going to design houses and buildings. But when some singing opportunities came up during his first year of university, Harris decided to take a year off from his studies. He never returned. With roles in blockbuster shows including The Boy From Oz, Mamma Mia, Miss Saigon, Wicked and Legally Blonde, Harris can't imagine life now as an architect.

Harris is about to embark on a new adventure as he heads off to Broadway but wanted  to present a final cabaret show in Sydney before he leaves. Harris loves the style of cabaret. It removes the fourth wall and allows Harris to interact with his audience. Sydney's Hayes Theatre is the ideal venue. With just 110 seats, it allows Harris to feel connected with everyone present – and for the audience to feel connected to him. There is no pretence about this show. It is Harris telling the stories and singing the songs that have shaped and defined his life so far. And at the age of 38, Harris says he has lots of stories to tell.

Harris has been to other entertainers cabaret shows and “An Intimate Evening With …” style of shows – and has often come away feeling very unsatisfied when the show was too polished, too stylised and too scripted, without really saying much about who the person really is in real life. Harris' show will be very genuine and natural.

Playing the role of the romantic leading man such as Chris in Miss Saigon, Fiyero in Wicked and Emmett in Legally Blonde, Harris is aware that most people only think of him as these characters. While he is incredibly grateful to have played these roles, Time Is A Traveller provides an opportunity for Harris to just be himself – telling his own stories, in his own words and in his own accent.

Most of the show is about his back story. Harris acknowledges it leaves him vulnerable as he opens up to an audience and shares his own life experiences, feeling they are in some way judging him and not just his performance, but he also knows it is so much easier to simply be himself. It's both scary and exciting. 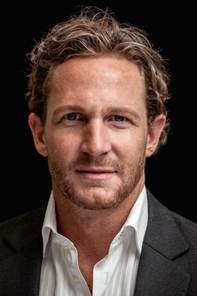 Harris describes himself as very driven and tends to be a perfectionist. He likes to keep busy and there is always something to progress further. He is invigorated by new challenges – this is what makes him spark and enthuses him. His upcoming move to New York is part of that need to progress himself. While he feels there is no ideal time to try Broadway, the time is right for him. Reflecting on his career so far has made Harris feel incredibly grateful and humbled by what he's achieved so far.

Those two words – grateful and humble – have been used several times by Harris during our conversation. Ask anyone who has met him and they will confirm, David Harris is an incredibly grounded and sincerely charming and genuine man. I asked Harris how he remains so humble and down to earth and he replies that he knows how hard he has had to work. Nothing has ever been simply handed to him on a plate. He's had many disappointments and fallen flat on his face in the past, (along with probably everyone else in the industry he says.) Being knocked down, and experiencing the disappointments that are inevitable, simply make the successes even better for Harris. Adding to his positive outlook on life, Harris comments that you can learn about yourself and gain little gems of wisdom simply by being of part of an audition process – you don't necessarily have to get the actual gig to learn from it.

As he grows older Harris acknowledges he becomes increasingly grateful for all he has achieved and never wants to take any of these opportunities for granted. It is something he often sees lacking in young emerging performers, and an attitude he will address in them if he feels it is warranted. Harris doesn't feel he simply “deserves” anything and knows plenty of people who would give anything to have the sorts of experiences professional performers have.

He has also learnt how to deal with disappointments better as he has matured. Harris has learnt to trust in the moment – if it's meant to be then it will be. If things don't happen then there was a good reason why. At 38 he now has more belief in his own abilities. He looks at setbacks differently and finds the positives in the experiences gained.

When Harris first started out his aim was longevity. He didn't simply want to be a flash-in-the-pan. His greatest support network has been – and still remains – his family. It is clear his family are an important part of his life. Harris told his parents the greatest gift they have ever given him was the freedom to make his own decisions in life. Even if those choices don't always work out those failures are Harris' responsibility. But when they do work out Harris can take pride and joy in the knowledge that he chose that, he did that, he succeeded.

Tattooed on his right arm are the words “Conceive Create Experience.” It's a mantra that he applies to all aspects of his life. Harris is a firm believer in seeing the positive in a situation. During more difficult times the tattoo acts as a little reminder to Harris to remain focused on being positive.

Harris wants his audience to feel something by his performances – whether it's to laugh along or feel heartbroken. It's something he appreciates as an audience member – he would prefer a less perfect singer who makes him feel something than the technically perfect performer who leaves him feeling nothing. Harris can feel the energy from the audience during a show and he loves to experience the moment when he “just knows” that as he is singing he has the audience sitting in the palm of his hand. He describes it as a magic feeling that “you've got them.” He also receives plenty of positive feedback meeting people at the stage door after a show (Harris assumes anyone who didn't like his performance isn't going to hang around stage door just to tell him!) But ultimately he knows when he has done a great job and given everything to his performance.

Harris has an innate ability to bring incredible depth and heart to his roles. Without any formal training, Harris developed his acting skills by observing others – watching performers like Jill Perryman and Todd McKenney, taking note of what they did and how they did it. It is something he continues to do – watching other performances, analysing what he liked, and why he liked it, as well as what he didn't like. Harris  wants to feel something when he is watching a show. But this desire to ensure his own audience is also moved has proven to take its toll on Harris.

His critically acclaimed role of Chris in Miss Saigon was the most demanding and exhausting role he had done – not simply physically but emotionally as well. Unsure how he could sustain the level required for eight shows a week through an extended season, he tried – for one performance only – to just go through the motions. He said the audience still applauded at the right times, still cried at the right times, still enjoyed the performance overall … but Harris felt like a fraud. He decided he could never perform at anything below his absolute best – even if it meant blowing out his voice or feeling completely wrecked by having a young woman "die" in his arms night after night.

It speaks volumes of the integrity and character of Harris not only as a performer but also as a person. One of my personal, most treasured theatre experiences was seeing Miss Saigon during the Adelaide season (with Harris in the role of Chris) and then spending time with my Vietnam veteran uncle at the monument his regiment had erected in honour of those on both sides who had died in that war. Watching Miss Saigon was more than a theatre experience for me – it also made me really consider (possibly for the first time) what my uncle and his mates had endured. My uncle was so moved by the show he said it should be compulsory viewing for every Australian. To find out now, years later, just how much it personally cost the leading man to deliver such a gut-wrenching and emotional performance, I appreciate this experience even more. And I appreciate Harris' willingness and sacrifice to take the performance to that level every single time.

This is who Harris is – he gives everything to every performance, whether it's a one-off performance such as playing the roles of Adam and Noah in the Australian professional premiere of Children of Eden and most recently as the Beast in two performances of Beauty And The Beast at the Melbourne Zoo,  or a long running season such as touring with Wicked. Harris wants his audience to come away feeling something from the performance. And they do … often with moist eyes and tissues in hand, other times with a broad smile.

As we talk of roles he'd love to play if he ever had the opportunity, Harris suggests Mickey in Blood Brothers (although admits he may now be getting too old for the role.) He's seen the play – and was a “blubbering mess” at the end of it. For now, Harris is happy just to see what comes up, continue to do what he's been doing but just try it in a new place.

Before he leaves for New York and the pinnacle of musical theatre – Broadway – Harris will present just three performances of Time Is A Traveller. He wants audiences to laugh, learn more about him and have an enjoyable night out. While there are so many more wonderful stories to share, you'll have to hear the rest from Harris himself. As Harris says, “If you want to know who David Harris really is, then come and see my show.”

For more information about David Harris check out his new website www.davidharrisofficial.com

Tickets are available at http://www.hayestheatre.com.au/coming-soon/time-is-a-traveller.html 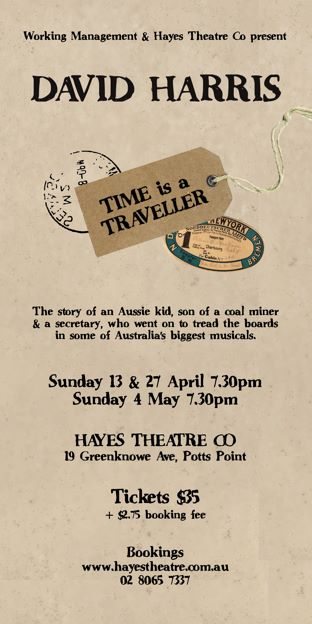