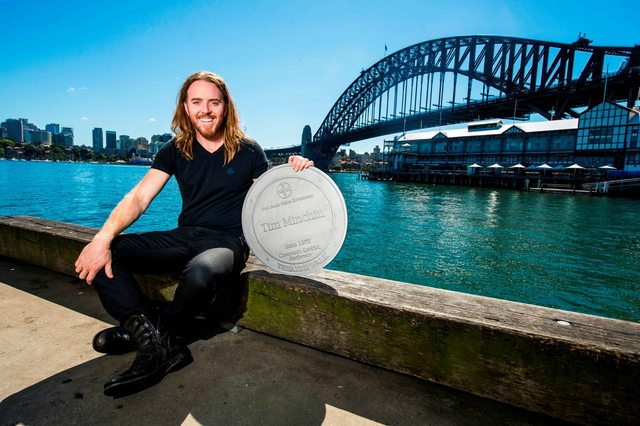 The first Australian to receive a Tony Award nomination for Best Original Score in 2013, Tim Minchin has won numerous awards including Best Newcomer at the 2005 Edinburgh Fringe Festival for his sell-out musical comedy show Darkside, and London Newcomer of the Year at the 2012 Whatsonstage.com Awards for his work on Matilda the Musical.

Destination NSW Chief Executive Officer, Sandra Chipchase, who officiated the plaque unveiling said: “Today we honour Tim Minchin, a very talented artist, who has not only contributed to the cultural fabric of our State and our nation, but whose work has also received international acclaim.”

“Sydney’s Theatre Walk commemorates and celebrates the work of our theatre greats and their enduring creative contributions which have enriched the lives of all Australians.

“It’s fitting that Tim Minchin joins the likes of Cate Blanchett, Geoffrey Rush, John Bell AO OBE and Jacki Weaver who are among the 21 legends of Australian stage and screen whose achievements have been recognised through individual plaques set into the paving stone around Walsh Bay,” she said.

Situated at Pier 2/3, the walk is a feature of the Walsh Bay Arts Precinct which is home to the prestigious Sydney Theatre Company, Bangarra Dance Theatre and Sydney Dance Company.

Tim Minchin is currently in Sydney to launch the Australian Premiere Season of Matilda the Musical, secured by the NSW Government through Destination NSW.

“Tim Minchin is an incredibly talented Australian artist, and Matilda The Musical is a wonderful performance that plays to over 20,000 people each week,” Ms Chipchase said.

“I encourage everyone to make sure they book tickets well in advance so they don’t miss out on the opportunity to see this fantastic production at Sydney’s famous Lyric Theatre.”

Matilda the Musical will open at the Sydney Lyric Theatre in July 2015.

World premiere of a new Australian musical in Bendigo!

Around The Globe In Sixty Minutes