This guy’s doll is practically perfect!

The first offering for 2014 by The Production Company (TPC) is the classic musical Guys and Dolls. Showered with Tony, Drama Desk, Olivier and  Helpmann Awards since its debut, this new staging of Guys and Dolls will be directed by Gale Edwards (Chess, Gypsy), Musical Director is the distinguished Guy Simpson (Gypsy), Choreographer is Nathan M. Wright (Rocky Horror Show, Sochi Winter Olympics, Avenue Q) with costumes by Academy Award winner Tim Chappel and scenery by Shaun Gurton. It features a star-studded cast with Martin Crewes and Verity Hunt-Ballard in the leading roles of Sky Masterson and Sarah Brown.

Catching up with Crewes and Hunt-Ballard during a rehearsal lunch break, I asked how the rehearsals were going. After just one week they were nearly half way through the show! It's Hunt-Ballard's first show with The Production Company, but the third for Crewes. He says there is a huge benefit that comes from being involved with other TPC shows. He is not worried about the short rehearsal time frame as he knows it all comes together in time, adding that once they move into the theatre and start focussing on the technical elements they can start to flesh out the subtexts of the show.

The cast commenced working separately but after just four days of rehearsals came together to run through the first act. Guys and Dolls is a huge show and the fact they were ready to run through a whole act in just a matter of days is quite a feat. Crewes comments that it's quite amazing when performers are put under that level of pressure what they can deliver. He says time constraints seem to give rise to creativity!

Verity Hunt-Ballard has extensive experience in theatre and television, but is probably now best known for her award winning portrayal of the title role in Mary Poppins. She describes the role of the missionary “doll” Sarah Brown as being very demanding of every discipline she has studied. It is challenging lyrically and vocally, as well as in speech and presentation and she is loving this opportunity.

Guys and Dolls was written in a Vaudevillian style, and as Hunt-Ballard acknowledges, it is somewhat of a lost style of theatre these days. She says most productions tend to err on the side of naturalism, so she finds it actually kind wonderful to be able to perform in this old Vaudevillian style. As Crewes adds, experienced and award winning director Gale Edwards knows exactly where that Vaudevillian style sits and is ensuring the show moves in that direction. When they first commenced rehearsals Crewes says it felt like an enormous task, but it's the style the show has been written in and that's how it needs to be presented. While playing it to the heightened level required for Vaudeville, it still must come from a place of truth. Although she says it has been exhausting and challenging for them as performers, Hunt-Ballard believes audiences will love the show.

Guys and Dolls is not the first musical Crewes and Hunt-Ballard have worked in together. They starred in Sweet Charity at Sydney's Hayes Theatre earlier this year, to rave reviews. The fact that they are already great mates has been helpful for this fast-paced rehearsal period as they can zone into the love story straight away. 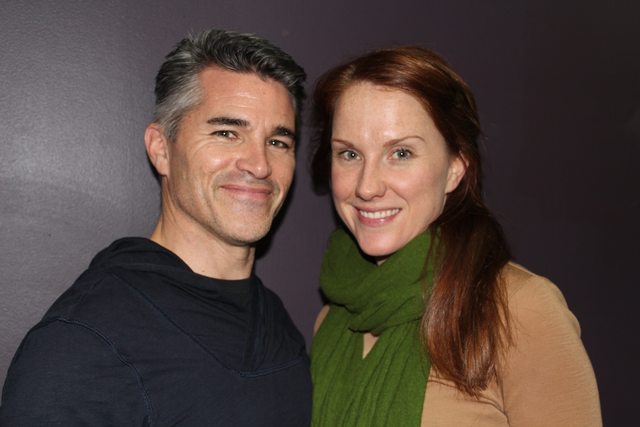 Guys and Dolls is one of the classic musicals, but both performers feel it is still very relevant today for a new and younger audience. First and foremost, Hunt-Ballard says it is a love story, and love is timeless. It's the age-old story of a girl who falls in love with a guy from the wrong side of the tracks. It deals with repression, prejudice and segregation, wrong versus right and what that actually means. There's a lot of themes running through the show, but due to the time constraints of a limited rehearsal period, the cast have to process it all away from the rehearsal room then turn up with bold and confident offers of how to best portray their characters.

In the song “I'll Know” there is phrase about the moral fibre of the man missionary Sarah Brown would fall in love with. Crewes says during rehearsals there was discussion about the fact his character, crap shooting gambler Sky Masterson, has possibly the strongest moral fibre of them all. He remains true to his code and honours his word.

Crewes comments his character of Sky Masterson reminds him of George Clooney in the movie Up In the Air (to which Hunt-Ballard comments how often Crewes is told he actually resembles the Hollywood actor!) Crewes explains that everything in life is easy for Sky and he is bored. He has no challenge – until he meets Sarah Brown who is the most challenging woman he has met. Sky could have easily dismissed missionaries as some sort of pie-in-the-sky dreamer but he can't do that with Sarah and in the end he joins her, but doesn't sell himself out. Crewes reflects on how society still loves to pre-judge, then box and brand people.

The standard of The Production Company shows has only grown over the years – their 2012 production of Chess (in which Crewes starred opposite Silvie Paladino) scooped the Green Room Awards with a whopping 7 awards, including Outstanding Musical Production. This reputation for excellence attracts a quality cast and crew to their productions. Hunt-Ballard says she has always admired the work of musical director Guy Simpson and can't wait to hear what he does with the orchestra.

Along with Martin Crewes and Verity Hunt-Ballard, the impressive cast includes: Adam Murphy and Chelsea Plumley as the long-suffering engaged couple Nathan Detroit and Miss Adelaide, Bobby Fox as Nicely-Nicely Johnson and Christopher Horsey as Benny Southstreet. It's the sort of high calibre, dream cast and crew you can only secure for a short season of just ten performances. Don't miss it!

10 PERFORMANCES ONLY: 19th to 27th July at the State Theatre, Arts Centre Melbourne.

The Importance of Companies Choosing Shows with Youth Involvement