Following the recent media coverage of the Tamar Iveri homophobia scandal, I am once again unable to believe how strong a force the Australian theatrical community is when it comes to issues of social inequality and the subsequent headway our voices can make when we stand together as one. Through the use of social media, we have eradicated the poison hiding within our ranks and have proven that we will not tolerate cruelty or risk the safety of our members.

To give a brief summary of this story (even though you have no doubt been smacked in the face dozens of times by the facts already through a leisurely scroll through your Facebook timeline), Tamar Iveri is a Georgian born soprano who up until recently was billed as a performer in Opera Australia’s upcoming production of Otello. Following the discovery of a horrific anti-gay Facebook status (written last year but only brought to light over the past few days), Australian theatre goers have expressed so much outrage that Opera Australia have released Ms. Iveri from her contract and are re-casting her role in Otello with only two weeks to go before the curtain rises on their first performance. Ms. Iveri claims that the comments on her Facebook page were made by her husband (as usual, the excuse is that he is a deeply “religious” man – which apparently means that his endorsement of violence is perfectly legitimate, because heaven knows, violence against another person is fine if God says it’s okay), but since these claims Ms. Iveri’s own homophobic tendencies have been exposed.

Before sitting down to write my views on this story, I experienced one moment of feeling sorry for Ms. Iveri and the irreversible damage that has been done to her career over the past few days, which has never been my reaction before. I am known as an angry bisexual feminist who supports gay rights and lives with way too many cats, so why should I ever feel sorry for a woman who has damaged and brought shame to the professional world that I love? I realised that to not speak up and have my feelings on this issue heard would make me a complete bystander, and that in staying silent I would lend my support to the views expressed by Ms. Iveri. In this case, I realised that the only thing to do is to be counted as someone fighting intolerance, and to add my voice to the chorus shouting that this type of behaviour should never be accepted by any person, and definitely will never be accepted within the confines of theatre. 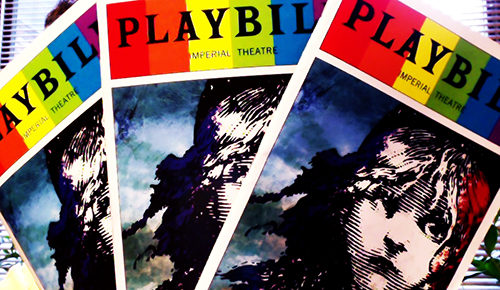 Pictured above: In support of the LGBTQ+ Community, Playbill has altered their logo during Pride Month and is featuring stories within their Playbill's on people who have significantly contributed to the culture of pride within the culture of American theatre.

I have one main problem with the general media coverage of this story so far, and this is it: when this story is covered by the mainstream media and journalists who do not understand the feeling of community achieved when participating in theatre, a large part of the true awfulness of Ms. Iveri’s comments is omitted. The shameful comments are covered, but never is it said that her words have a hugely negative impact within the world of theatre. There are young people out there attempting to hide themselves away, some going so far as to kill themselves because they cannot find a safe place to talk about their sexuality or to feel accepted for their sexual preferences. In countries all over the world, it is commonly accepted that the theatre is a safe haven from those who may persecute you based on these issues, and is known as a place that you will be accepted for being yourself. Theatre has one of the highest ratios of “out” people of any art form, and because of this, we are generally a group of very socially forward thinking people. It is realistic to believe that there are certain individuals in the theatre community who do not follow the open minded doctrine of the theatrical community, but until you come face to face with them, you are able to mostly ignore this reality and shield the people who need protecting from the dangers of homophobic prejudice.

Also, when creating art for the stage it is the necessary that we must be completely honest about ourselves with those surrounding us. If we don’t accept ourselves and feel safe in our own skin, then how are we to inhabit a character and create a new, completely real person? To me, this is why Ms. Iveri’s comments are so hurtful. Not only did she purposefully incite violence and hate towards a large group of people, but she attacked those that show her their souls, and share in the euphoric experience of creating new worlds for a stage audience. Tamar Iveri attacked the very foundations upon which theatre is built, and made people feel unsafe within their own home.

This is where I must stop rambling, and must thank Opera Australia for listening to their fans and their consciences. Releasing a person with such “unconscionable views” from their company was a wonderful move, and shows a strong position of support to the gay rights movement in Australia. It shows that Opera Australia supports their talented company, and they will not make their employees feel unsafe in the rehearsal room or on stage, and that humanity comes before money.

The theatre has always been a leader of social understanding and equality, and this recent upset has only brought Australian theatre lovers closer together. If we remain vigilant and outspoken, we can influence social change, and can continue to be known as an honourable profession supporting honourable people.

An Epic Journey – AENEAS, The Musical

Notes From The Warsaw Ghetto