The Peach Season is a contemporary Australian play written by Debra Oswald. Oswald's plays include Sweet Road and Garry's House, while her television credits include Police Rescue, Bananas In Pyjamas, The Secret Life of Us and Offspring. The Peach Season was the winner of the 2005 Rodney Seaborn Playwright's Award.

The play is set on a peach farm and focuses on the lives of Celia and her daughter Zoe. Celia fled to the country with baby Zoe, when Celia's husband was murdered: an innocent bystander in the wrong place at the wrong time. Growing up on the peach farm, Celia has protected her daughter from the outside world, afraid of what harm may come to her; afraid of losing Zoe too. However, Zoe is now 16 years old and wanting to explore life. When siblings Kieran and Sheena arrive at the farm unexpectedly, looking for picking work on the farm to earn some fast cash, Zoe and Celia's worlds are turned upside down.

The quality set, designed by John Mills, and detailed props (John Mills and Jan Langford) were enhanced by clever and effective use of multi media. Lighting design by Robin Le Blond added mood, which was further enhanced by a quality sound design, by Christine Grant, that created a very authentic ambience from the moment the audience stepped into the theatre. Credit should be given to the stage crew who changed the peach trees (at one point in the second act I didn't even notice when the change occurred) and kept the sense of realism of seasonal change; not to mention the local Yarra Valley peaches which added the ultimate authenticity to the play. (Locals knew as soon as actor Blake Stringer took a bite of the peach is wasn't a supermarket peach!) 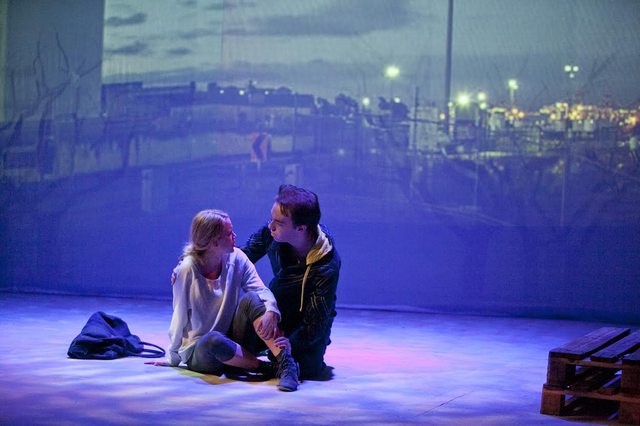 The 1812 Theatre have pulled together a strong and experienced cast for The Peach Season, all very believable in their roles. Sonya Wilson is convincing as the overprotective mother, Celia, who is trying to protect her teenage daughter with all the best intentions at heart. Her daughter, Zoe, is played by Kristen Cunningham. Cunningham is perfectly cast. She has a young appearance and brings the right balance of an innocent and good daughter mixed with a hormonal teenager with a passion for life.

The troubled siblings who unwillingly bring havoc to the tranquility and safety of the peach farm are played by Blake Stringer and Becky Lee. Stringer is excellent as the impulsive but well meaning Kieran, who is always making wrong decisions. His energy levels were high throughout the play and he brings a certain warmth and endearing charm to the character. Despite his poor choices, the audience can believe he doesn't mean any harm. As the older sister, Sheena, Becky Lee is superb. Although there is nothing said, you can't help but get the feeling Sheena is a survivor of abuse and comes from a troubled past. Lee's portrayal of Sheena is dark, protective and suspicious.

Ian Johnstone plays Joe – the son of neighbour to the peach farm, the Hungarian-born Dorothy (played by Anne-Maree Eastman). Dorothy, helps at the peach farm as well as being a friend to Celia and her daughter Zoe. Joe regularly visits his mother and escapes his own marital issues. On one of these visits Joe picks up the siblings and brings them to the peach farm looking for work. 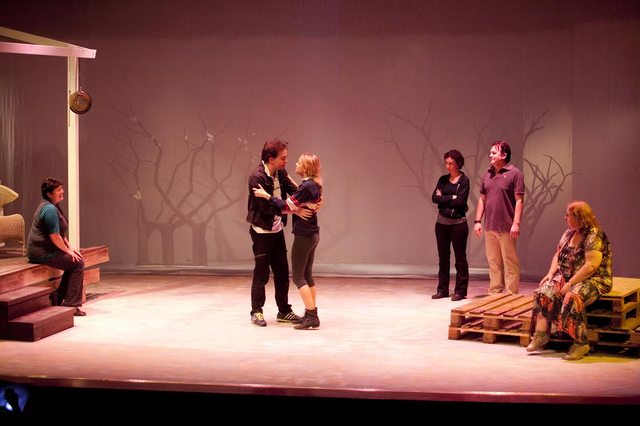 It has all the makings of a thrilling story – and at times it is. There are certainly some strong performances, but just as the tension and suspense builds to a palpable level, the tone changes as the action momentarily eases for a narration from Dorothy. While the narratives add in detail to the story they tend to dull the tension and provide relief for the audience. In fact there were times when Dorothy's entrance onto the stage was greeted with laughter from the audience with the narratives becoming an unfortunate break in the mounting tension.

Credit also must go to the cast and crew for dealing with an unexpected power blackout towards the end of act one, and to Anne-Maree Eastman in particular who had to deliver her lines just as a storm hit. Her line of “it was clear for three nights and then …” was followed by howling winds and rain hitting the roof and it took some audience members a moment to realise this was not actually a very good sound effect but indeed the arrival of a fierce storm outside.

Experienced director, John Mills, has delivered a powerful play that is only undermined by some flaws in the book itself. With less narration the tension in the play would not rise and fall so frequently, although some audience members may appreciate this break in the tension and enjoy the lighter moments of Dorothy's story-telling.

Overall, The Peach Season is powerful reminder of the painful struggle parents must face as they learn to let go.

To Wit – Steve Ross sings Funny Songs Throughout the Ages

Nazeem Hussain – Hussain In The Membrane

My Name is Jimi