The Hills Are Alive Once More

Everyone remembers the first time they saw The Sound of Music… It is the classic tale of romance and family dynamics interwoven with timeless tunes and intricate themes. It is with great enthusiasm and appreciation for this classic musical that Wendy Samantha Productions is proud to present their own youth theatre production of The Sound of Music.

Set in Austria in the 1930s, the story depicts the free spirited Maria running carefree through the hills, trying to forget her unsuccessful attempts at becoming a nun. It is then that she is sent to the von Trapp family to work as a governess for the seven children of the handsome navy Captain Georg von Trapp. Through music and Maria’s enthusiastic and caring nature, the family grows through love and loss, as Austria comes under the control of Nazi Germany and they must fight to stay together as a family.

“Being able to direct The Sound Of Music is a dream come true,” says Director Wendy Samantha. “It's one of my favourite musicals of all time, so having the opportunity to recreate and share this classic is priceless! Having been a classroom teacher for almost a decade, I was always surprised at the amount of children who could sing the songs from The Sound Of Music but not know where they came from, or understand the context around them.  I do hope that by putting together this production the local community will come to enjoy the show and the next generation can share in this timeless tale, truly understanding the origin of songs like Do Re Mi and My Favorite Things.” 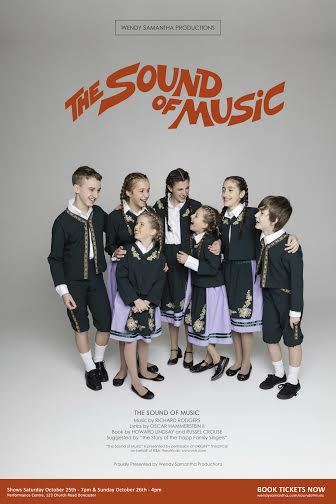 Although the play has always been and will always be something the entire family can enjoy, the details of the storyline is an aspect that can take a few views to fully appreciate. “When I was a bit older I saw a local production of The Sound Of Music and understood more of the storyline,” says Wendy of her first experiences with the musical as a young child. “I couldn't believe how intricate it was, despite my first childhood impressions.  The songs were just as fabulous, if not more powerful when performed live – and I knew then that I wanted to put The Sound Of Music on stage.”

There are few pieces of theatre that can captivate the hearts and minds of the world for as many decades as this show has. Part of its successful longevity is the timelessness of the storyline that can still be related to in our world today, as Wendy agrees. “I think The Sound of Music is still being performed today because of the way people can relate to so many facets of the storyline, and the timeless characters. Everyone old or young knows at least one or two songs from the show, and can sing along to them.  The children in the audience are amused by the cheeky von Trapp children and relate to the bond formed between them and Maria, and later their father. Teenagers smile at the way Liesl sneaks off to see Rolf and find comfort in Maria's guidance. Adults then understand another layer of the storyline – there's the love triangle, Georg's pride for his country, Maria's battle to choose her life's direction and then how war affects everyone.

“I think when you first watch The Sound Of Music, what you take away from the story is the feeling of love. It may be the love between family, between the couple or for your country, but it is very evident no matter how you see the show.  The fact that most people favour the love story in The Sound Of Music over Georg's strength of character and loss of country is probably because it is easier to relate to and very much highlighted. You watch Maria lost in direction and you crave her happily ever after.  Despite the complications Georg faces, you know his character is strong and you have a faith in him that he will overcome his difficulties.  It is through the love between Maria and Georg that they both find their path and their strength.”

Above: the iconic film image for The Sound of Music.

The actor excited about the prospect of taking on such a well-known character as Captain Georg von Trapp is James Worboyes. “The thing that drew me to the role most was the change from characters I had done in the past. In the case of Rolf this meant becoming a Romeo like character but with an extreme twist towards the end, his opposite being Georg von Trapp (who is seen as) a cold but conscious character who, put extremely cornily, learns to love again. I believe the loving, caring side of Georg really only comes out when he realizes he is in love with Maria – before this he is extremely reserved to the point that he comes across as cold. Georg's strength of character is what shines through before that though, and I believe this makes way for a more spectacular love story.

“As a child I watched the movie thinking of myself as Kurt, a young boy who looked up to his older male role models. Now the show seems to scream the themes of patriotism, responsibility to family and true love – things I overlooked as a child.”

“Brigitta’s charisma and personality drew me to the role; she’s very cheeky and cunning and I jumped at the chance to play her,” says Mia Zelesco, of her opportunity to play such an iconic character as Brigitta von Trapp in an equally iconic musical. “The Sound of Music has always been one of my favourite musicals and I always watch the movie whenever I get the chance. In fact, The Sound of Music was actually the first show I ever auditioned for, in 2010, when I auditioned for the role of Gretl.  I remember the first time I watched it; I was enthralled.

“I think the thing that makes The Sound of Music such a timeless musical that is still being performed today is all its classic songs that everybody knows and loves. The story touches everyone as it is about the importance of being true to yourself.”

“The cast and crew of The Sound of Music have thoroughly enjoyed putting this production together,” says Ms. Samantha of the company’s experience in rehearsing their performance so far. “The youngsters who take to the stage are aged between 8 and 18 and come from all over Melbourne.  They have been in rehearsals for an hour a week over 6 months and it has been a mammoth effort by all to prepare the show.  We have had so much fun, and we hope you come and support youth theatre by watching The Sound Of Music and having a ball!  You can get a photo with the cast and some autographs after the performance where you can ask questions and get to know the stars of tomorrow!”

Wendy Samantha Productions will present The Sound of Music for two performances only on the 25th and 26th of October. Tickets can be found at this link, and the company can be liked on Facebook.

Greetings From A Cabaret Star. by Tina Del Twist

David Page to tell his story again in Page 8