The Front – Creating the ANZAC Legacy Through Theatre

If there is one enduring legacy in Australian history, it is that of the ANZAC’s, the brave men and women who enlisted to help their country all those years ago, and still inspire the Aussie spirit today.

While this legacy is represented well in most other mediums (film, television, fiction and non-fiction books, historical and current media articles etc.) the one place that appears to be lacking in the retelling of these events is Australian theatre. While European and American theatre have a healthy catalogue pertaining to the events of World War I and II, Australia only has a few shining examples. Lane Hinchcliffe, a classically trained Australian writer and composer, hopes to add to our own war-related theatrical wealth with the second workshop of his new musical, The Front, being staged this weekend, and hopefully presented in full form by the time the centenary is complete next year.

“I was passionate about history all through school, but eventually I gave it up in my final year and put most of my focus into music,” says Mr. Hinchcliffe. “I knew about 15 years ago that I wanted to write a musical, and that I wanted to use my skills to write a piece that communicates the ANZAC legacy. My grandfather fought in World War II and there were other members of my family involved in World War I, so I’ve always understood the lasting effects that these conflict’s have created.” 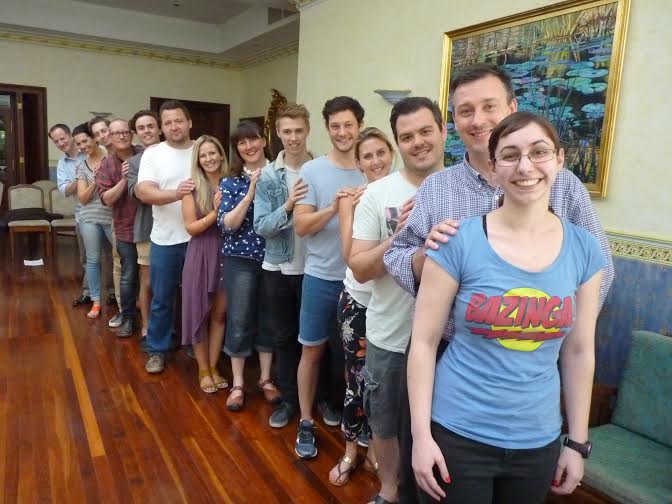 The workshop of The Front, to be presented this Friday, involves some of Australia’s brightest young talent, and Mr. Hinchcliffe is incredibly impressed and humbled that not only has he been supported by wonderful artists, but that other pieces of his ANZAC related material are being endorsed by the ANZAC Centenary Commemoration Committee of the Department of Veterans Affairs.

“It’s incredibly humbling to have the support of so many different groups of people… It reminds me of the ANZAC spirit, actually, that people from different parts of the community are more than happy to get together to create something like this.”

Mr. Hinchcliffe spoke to me about the events that take place in his musical, and discussed how he went about illustrating and composing the human elements of one of our worst campaigns, that of Fromelles, in Northern France.

“I realised about three years ago that I needed to narrow down the events within the show. I decided to base it on the Battle of Fromelles, which was a complete failure to ANZAC and British forces.” For those unaware of the history of Fromelles, the battle was supposed to be a feint, a tactic to pull German forces away from the Somme, but the plot was exposed before it could be properly executed. This lead to an event that caused many casualties for ANZAC and British forces – according to the Australian War Memorial site, ANZAC and British forces lost over 7,000 men combined, while German forces suffered over 1,000 casualties. “The Front is based on a very dark battle with huge losses for the men involved, so it was very important for me to write based in truth and history, but I was careful to create a piece that wasn’t completely dark from the outset. We have used the backdrop of a significant and horrifying event, but it helps us serve the dual purpose of expressing the destruction of war and creating an environment of friendship and love amongst those who served.”

Above: A promotional image for The Front, from the shows Facebook page (linked below).

Speaking of those who served, Mr. Hinchcliffe commented that women were a huge part of the story he is trying to tell, and that he believes history (while not necessarily meaning to cause disrespect) often forgets about and invalidates the contribution women made to our war effort.

“There were incredible women involved in the war directly and indirectly, whether they were looking after the country back home or fighting alongside the men as nurses. Again, we are being true to the time and the historical elements, but we have three very talented women in our show, and they are completely embracing the strength of what these women had and then taking it one step further by imbuing the characters with their own strength. It’s interesting to note that a lot of our cast have responded so well to these female characters… I can even remember a conversation during rehearsal where Rob Mills (a cast member of The Front) was talking to others about the women in the show, and commented that he is a feminist and the show reflects many feminist ideals, no matter the time in which it is set. It’s wonderful to illicit that type of response and conversation, and it’s important to remember that the ANZAC’s were not only men. ANZAC forces included women as well, but regardless of gender and most importantly, they were average Australian’s who rose to a challenge.”

“The ANZAC legacy is there to remind us of the importance of values, and teaches us to not lose our humanity. It is a legacy borne of mateship and the importance of looking out for one another, rather than fighting hard and killing ‘the enemy’. No matter your political opinion on WWI, you should be able to see that so much of what our nation is today was present in our troops.” Mr. Hinchcliffe hopes that he and all of those involved in The Front are able to contribute in their own way to the lasting lessons of the ANZAC’s, by using the art form that inspires them, their source of humanity, to continue the message created so long ago.

“I think the Australian public are embracing a legacy that epitomises the cost of war, educates on what conflict takes away from us, and reminds us that we can stand up at any time and help others out. It’s important that we all do our part to continue this legacy, and that we continue creating art and stories that will be able to educate future generations.”

For further information on The Front, please visit and like the Facebook page for the show. Watch this space for exciting news on what lies ahead for The Front!

Time is a Traveller – David Harris tells his story.

There’s Something About Maureen Andrew