When asked to interview Tom Sharah about his upcoming cabaret with Hayes Theatre Co., I wasn’t quite sure what to expect. I had never interviewed a cabaret artist before, and as a Victorian I had never experienced Mr. Sharah’s performance style. When I first googled his name, up popped quite a few YouTube hits (my favourite being a performance of Rocky Horror’s Sweet Transvestite, with a chorus of Carole King’s Natural Woman added for extra fun) – illustrating to me that not only does Mr. Sharah have the voice to pull off a fantastic song revue of my favourite era, but he also has the personality and performance ability to make anything his own.
When I mentioned that I had watched video performances of his before beginning our interview, Mr. Sharah was mildly horrified. “Oh no!” he said, before telling me that he loves YouTube as a viewer, but not as a performer. He spoke to the fact that social media sites such as YouTube and Facebook have completely changed the world we live in, reshaping new generations into a different type of society. This conversation led straight to a discussion of Mr Sharah’s upcoming cabaret (That 90s Show), where he plans to bring forward and reflect on the era of sensational music and pop culture that constitutes the 1990s.
I began by asking Mr. Sharah why he had chosen to write a cabaret based around this period, when it was a decade that is still fresh in some people’s minds. Mr. Sharah immediately answered that he has a “huge sense of nostalgia” for the decade, and that it has been inevitable for some time that he would write a full cabaret featuring the things that inspired him as he grew up. When approached by Hayes Theatre Co. to write a piece, his first thought was that it was about time that he made some observations about his formative era in front of an audience.
Born in 1988, Mr. Sharah mentioned that he believes the 90s is “almost vintage now”, and that many of the iconic artists of the decade have disappeared from public memory. During the three months that he had to write this show, Mr. Sharah absolutely loved filtering through his memories, rediscovering and re-contextualising so much of the art, fashion and popular culture that has shaped his generations way of seeing the world today. He cited everything from Disney’s The Little Mermaid to the late Whitney Houston as having an influence over his life, and told me that both would feature prominently in his show – along with classic 90s romantic comedies, a tribute to boy bands and material made famous by the Spice Girls. 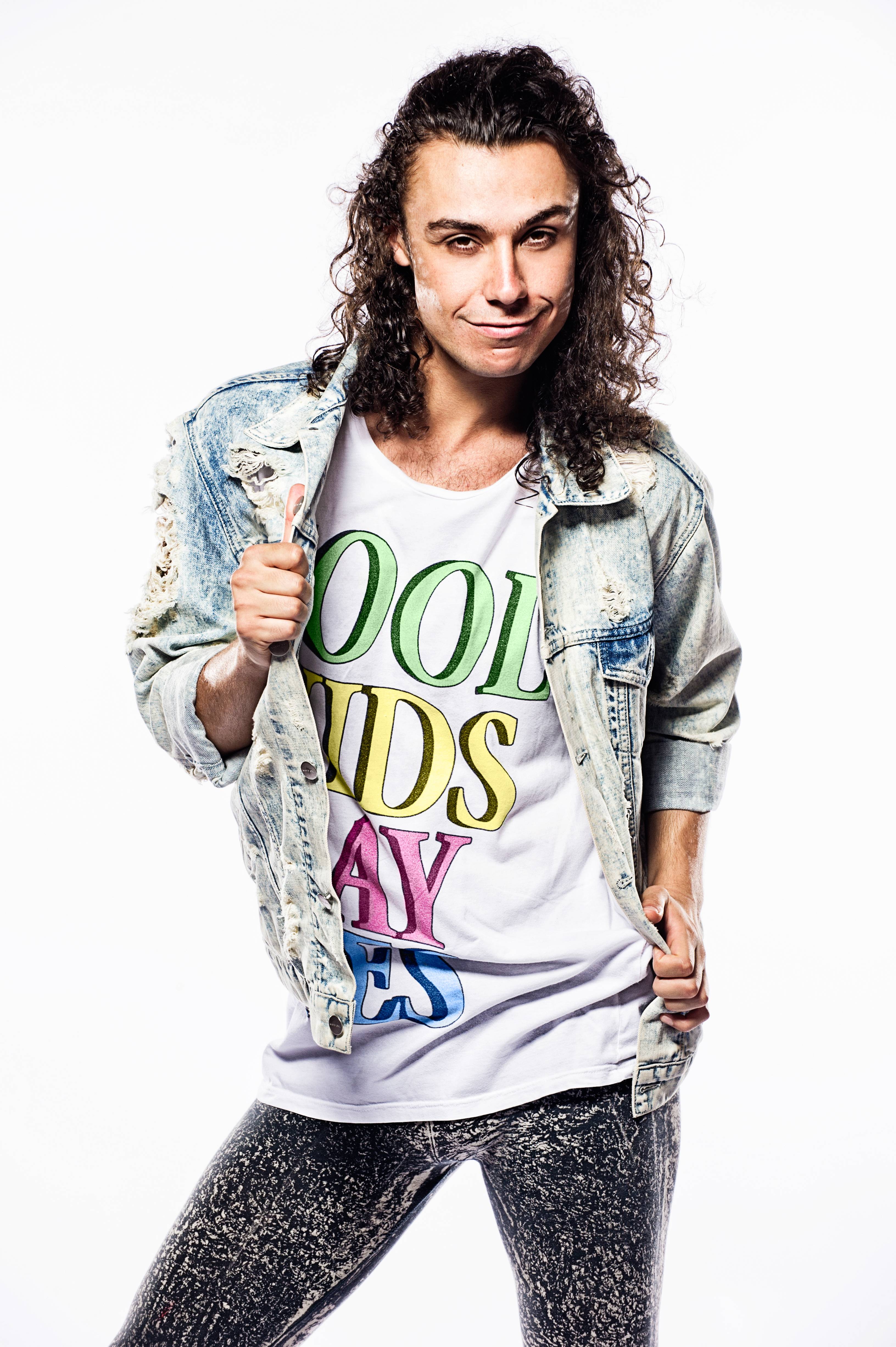 Pictured above: Tom Sharah in a promotional image for his show.

Mr. Sharah plans his cabaret to be equal parts music and dialogue, and hopes that his audience will enjoy all aspects of his show. “It would be easy to over-analyse the show I have put together – I hope the night gives the audience a light-hearted comedic experience.” He hopes that some of the music and culture that he identifies with as inspirational from the 90s will inspire others, or make them laugh, but is highly aware that each member of the audience will respond completely differently to the material presented. Mr. Sharah says that he is very aware of the fact that he is presenting a heightened version of himself to the audience who watches him on stage, and hopes that nobody leaves thinking he’s an idiot, or any other bad word that may spring to mind.

When asked why he loves performing cabaret styled shows so much, Mr. Sharah’s response was immediate. “I think it’s one of the most highly challenging art forms there is. Performing as yourself in a cabaret, it is your job to make an audience love you – there’s nothing to stand behind, figuratively and literally, and when you succeed you’re able to utilise all of your skills in one show.” Mr Sharah has been involved in cabaret going on five years now, with That 90s Show being his third foray into writing his own material.
I asked Mr. Sharah if his recent experience of being on Channel Ten’s “I Will Survive”, or his first role in a musical (playing Aldopho in The Drowsy Chaperone) had influenced his ability to write at all, or had changed his thoughts on cabaret performance. With That 90s Show being his first piece written after both of these new experiences, Mr. Sharah believes that each attempt at something new is bound to shape each writing endeavour, and with his first show being written at 20 and That 90s Show at 26, he hopes his ability is growing with everything new that he does.
Mr. Sharah and I also briefly had a chance to talk about his future plans, touching on the idea that while his home will always be cabaret, he would also like to continue performing in musical theatre. Speaking of the fact that he believes he is only suited to a very small amount of roles, Mr. Sharah cited Hedwig and the Angry Inch as his dream show, and hopes that one day he can play the title role. He told me that Trevor Ashley (Australia’s Les Miserables) had made a trip to Broadway recently, and after watching Neil Patrick Harris in the role, had texted Mr. Sharah back home to tell him how fantastic the production was. Mr. Sharah says he is “desperate to do more musical theatre, but cabaret is my soul food. There’s nothing like it.”

Tom Sharah can be seen performing in That 90s Show on Sunday the 6th of July and Sunday the 13th of July. Ticketing information can be found by following this link.

The New Face of TP Reviews

Hey Melbourne, Welcome to the 60s!