Michael Griffiths was just nine years old when he first watched the video clip of Sweet Dreams by the 80's British pop duo Annie Lennox and David Stewart of The Eurythmics. Although he was a fan of The Eurythmics, it was really all about Annie Lennox; she was his idol.

Griffiths originally started in cabaret with a show about another pop diva: Madonna. He knew it was a risk to play Madonna, but Griffiths discovered the audience was willing to accept that this guy before them was actually an 80s pop diva and the show was a lot of fun to do. After a successful season as Madonna, it gave Griffiths the courage to do a cabaret show about his real idol of the 80's: Annie Lennox.

Griffiths loves the cabaret genre of theatre. While everyone has a different definition of just what cabaret actually is, to Griffiths, cabaret is story telling with song. Cabaret is growing in Australia – largely due to the success of the Adelaide Cabaret Festival, which is now an internationally renowned event. Griffiths comments there is something lovely about cabaret in winter. He suspects that because the Adelaide Cabaret Festival is held annually in winter, cabaret in Australia now feels like it should be a wintry event. It may be that the closeness and intimacy of cabaret is better suited to a colder season … and a candle is always an added bonus!

Sweet Dreams: Songs By Annie Lennox recently won Best Cabaret at the Adelaide Fringe Festival this year. Griffiths was grateful to simply be nominated amongst some very high quality shows and never expected to win. It is testament to the quality of his show and the way the audiences have received this nearly 40 year old man playing the role of such an iconic 80s pop diva.

There is a variety of ways a a tribute show can be performed. Some performers will mimic the character they are playing to tribute to, but Griffiths doesn't even attempt to do this. He doesn't change his voice. He doesn't dress up. He just wears pants and a white shirt, walks on and says, “Good evening, I'm Annie Lennox.” He says it adds a certain campness and lightness to open the show. However, after a short laugh from the audience, they quickly embrace Griffiths as their Lennox. The show celebrates the songs and nostalgia of his youth as well as the often turbulent life of Annie Lennox. 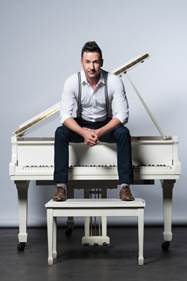 Sweet Dreams: Songs By Annie Lennox has been written in collaboration with Dean Bryant. In researching for the show the pair discovered that Annie Lennox was really the ideas person and the lyricist, while Dave Stewart was the filter and brought the music to the table. Annie Lennox is a pianist – so too is Griffiths, and he spends an hour seated at a beautiful grand piano telling stories and singing the music of Annie Lennox. Being winter and being cabaret, Griffiths adds there is a candle in the show – it's his one and only prop. It's not just for ambience or decoration, it's part of the story of this pop diva who would light a candle to scare away the ideas that weren't worth pursuing.

So who will enjoy this show? Griffiths suggests fans of The Eurythmics will certainly enjoy the nostalgic journey of the show, as they reminisce over these much loved classic tunes, but audiences can also expect to learn something about Annie Lennox. She and Dave Stewart had been in a relationship for four years, broke up and then formed The Eurythmics together. It was a difficult time for them and the depth of the music certainly expresses this lyrically. Take away the music and you are often left with some very deep lyrics of pain and sorrow, jealousy and betrayal. There are also songs filled with joy and humanity. It's a show that can bring tears and smiles. Griffiths doesn't usually hear any cries but takes it as a huge compliment when an audience member says they were in tears. He wants his audience to be touched by this music. Even audience members who think they don't know The Eurythmics or Annie Lennox have loved the show and realised they do know the music after all.

Does he have a favourite Annie Lennox song? No – he says they're all perfect and if he had to choose a favourite it would be different every time. He says there is also something joyous about these songs that people often can't help but sing along with Griffiths, and he admits he loves hearing this from his audience.

After successful shows in Adelaide and Brisbane, Sweet Dreams: Songs By Annie Lennox is about to play a season in the beautiful intimacy of Sydney's Hayes Theatre. Go see this award winning cabaret that has been playing to sell out crowds and experience it for yourself.

Sweet Dreams: Songs By Annie Lennox plays at The Hayes Theatre from the 2nd to the 5th of July.

For more information and tickets:
http://www.hayestheatre.com.au/cabaret-season/sweet-dreams-songs-by-annie-lennox.html

See Michael performing the Annie Lennox hit Thorn In My Side below:

"Griffiths is extraordinary…a compelling blend of tranquillity, turbulence and gentleness that comes from being able to express pain creatively"
The AGE


"With a stinging sense of humour and enough charm to woo even the most hostile of audiences, the former Jersey Boy captured the room from the moment he stepped on stage."
The AU Review