Sweet Charity at The Hayes Theatre

The Hayes Theatre presents as its debut production a unique Australian performance of Sweet Charity. The production incorporates some of the best talent Australia has to offer. A unique musical performed by an elite group of people in a theatre with a history that makes it seem like it was created especially for this production.

Sweet Charity stars Verity Hunt-Ballard as Charity and Martin Crewes in the roles of all three of her love interests. The production is brought to life by the artistic talents of Andrew Worboys (musical direction) Andrew Hallsworth (choreography) Tim Chappel (costume and wig design) and directed by Green Room Award winner Dean Bryant.

The musical tells the story of Charity Hope 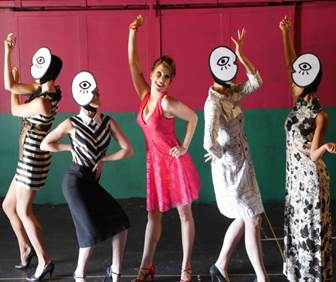 Valentine, an optimist in a hard world; One of society’s battlers working at a dance hall to make ends meet. She dreams of a different life and believes finding love is the key. Her hope of finding true love is in stark contrast to her dance hall friends that simply settle for their lot in life. But who does not have a dream? Can Charity beat the odds and find love?

Hope-Ballard says of Charity “She's such a complex woman. She moves very quickly, (if not manically) from extreme joy to deep heart ache. She's a three dimensional character that is a survivor.”

Crewes plays all three of Charity’s love interests. A complex mix of characters who in turn expose Charity’s vulnerability as well as her ability to love. Crewes says: “The challenge with each of these roles…is to find their true essence and not judge them for the way they get themselves through the day.”

Based on the Federico Fellini film “Nights of Cabiria” Sweet Charity was first adapted for the stage by the great Bob Fosse. Bryant is a huge admirer of Fosse but is intent on bringing his own dynamic bravura to this production. “Fosse is famous for his iconic dance style, but his genius, as far as I'm concerned was with the techniques of storytelling… I feel like what's important to honour is not replication of his choreographic style, but his intention…’

One could argue as a musical Sweet Charity is even better than the original film. Music does after all have a unique power to transport the audience. Crewes says: “Musical theatre, when it's done well, has all the power that great theatre has to move and inspire with the addition of the emotive power of music”

The challenge, of course, is to bring a large scale Broadway musical to a small stage in Potts Point; a challenge that in fact made it more fun for Bryant. The musical director Worboys also took to the challenge coming up with unique arrangements suitable for a more intimate theatre. What could have been an obstacle was tackled with boundless enthusiasm; true testament to Australian talent and the ability to tackle seemingly insurmountable odds much like Charity’s pursuit for happiness.

That the Hayes Theatre is so close to Sydney’s iconic King’s Cross means that a play set in a seedy world reflecting the plight of the disadvantaged made it an obvious choice as an opener. It is those parallels which make Sweet Charity, and indeed musical theatre, relevant even now in 2014, a fact that Crewes and Bryant are emphatic about. According to Bryant “It speaks to the huge section of society who aren’t lucky enough to be born into families with advantages.”

The play still has much to offer in terms of its themes. So much so it is lamented by Crewes; “Sweet Charity is about social inequality. The plight of honest, hard-working people to get ahead in life when the odds are stacked against them. It's about love and the pursuit of happiness. And ultimately it's about belief in the face of seemingly insurmountable odds. I would love it if some of these themes were no longer relevant but sadly that's not the case.”

Good musical theatre is as relevant today and socially important as any other platform of artistic expressions, says Crewes. Indeed as an artistic medium it can offer so much to an audience. In Sweet Charity for example, the lead character is so well-rounded and believable that an audience will find her instantly relatable. It is fitting that Hunt-Ballard should have the last word on the fearless character she portrays:

“She is an optimist and an idealist, a lover and a fighter…. I think there's a bit of Charity in every woman…’
The fact that this theatre named after Nancye Hayes who once played the lead role in Sweet Charity, will stage the musical as their inaugural production is no coincidence.  According to Caroll: “…certainly the fact that it was Nancye’s break-out role was a large part of why we wanted it to be the very first show at the venue.”

It is fitting perhaps that a role that changed the landscape for Australian performers is being performed at a theatre whose mission it is to provide a platform for talented Australian artists. “A large part of what we want to do at The Hayes Theatre Co”, Caroll says, “Is nurture and present work from up-and-coming Australian performers and creatives – and Nancye’s casting in Sweet Charity in the 1960s was a watershed for Australian performers.”
Nancye Hayes herself will be the guest of honour. She lives nearby and recently visited the theatre. According to Caroll she exclaimed “The Hayes is here.”

Ms Hayes may well have been referring to her own grand entrance as much as to the introduction to her brand new namesake, but yes Nancye “the Hayes is here” indeed!

Keith Brockett On Being A Puff