Whether or not you are a fan of the original Star Wars films, you cannot deny their broad appeal and strong fan-following, spawning dozens of novels, animations, parodies and more. Fans show their love of the franchise with cosplay, music clips, tattoos and more, but for Russall Beattie, his fandom was expressed in the creation of the Star Wars Burlesque, a risqué show that merges the characters and imagery of the Star Wars universe with the adult fun of a burlesque show. That original show was so popular, that now it has grown into a much larger tour of The Empire Strips Back, with more performers, more acts and more spectacular set pieces to bring Star Wars to life on stage in this burlesque parody. 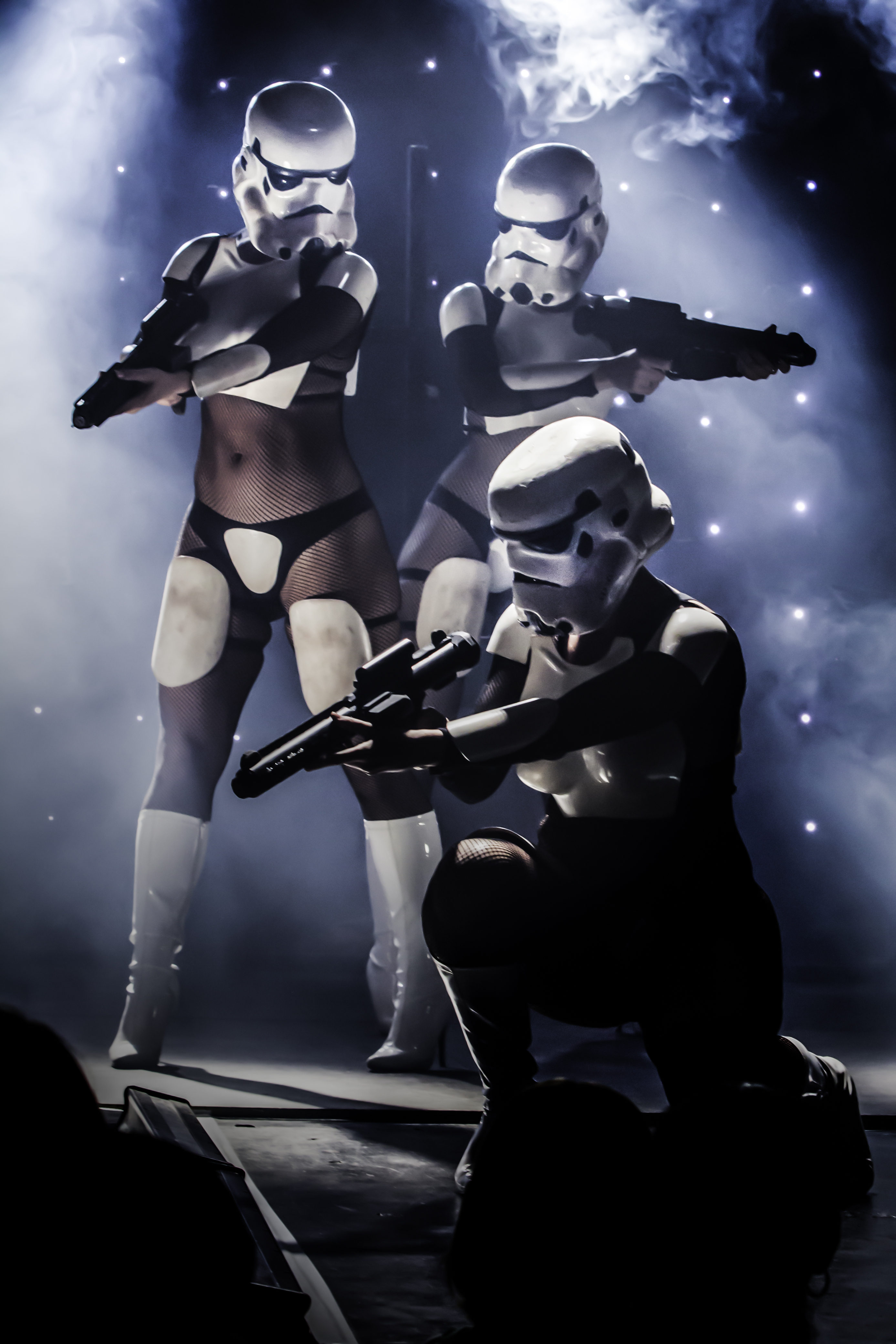 Wars Burlesque, a production with around 13 people, and some small-scale props and costumes based on the original Star Wars trilogy. Originally Beattie made everything for the production himself, and while that production progressively evolved, it was always a small show that started off playing in smaller spaces. However, when the show became popular and toured around on larger stages, Beattie says that the need to redevelop it into a much bigger production became evident. So then a year ago, Beattie destroyed the old sets and props and started from scratch, building a new production to the much grander scale he wanted it to be.

From there, the development of The Empire Strips Back has taken nearly 8 months, but has produced some impressive designs. The show’s Jabba the Hut has been rebuilt, going from 2m to 4.5m long, almost ‘life-size’ compared to the films. Many of the costumes and props are faithful replicas of the iconic images from the original films, and while they do take some creative license as a burlesque show, Beattie has drawn in a team of artists that includes people who worked on the Star Wars prequel films to create objects that feel like they’re very much a part of the Star Wars universe.

While many of the characters have become female, the characterisation, choreography and storytelling are intended to feel like an extension of the Star Wars source material as well as being a parody of it. Beattie says that this was made by fans for fans, and they wanted to avoid the look of just sticking Storm Trooper masks on burlesque dancers.

As well as the Jabba the Hutt prop, the show contains a remote control R2D2, a 7 foot wookie, a life sized land-speeder and a full sized tauntaun, but the team have also built smaller parts of the act that have been crowd pleasers beyond the spectacle. A routine featuring Emperor Palpatine and another with the Imperial Guard have proven to be crowd favourties, along with the larger scale spectacles. Beattie says that it is meant to have the feel of a rock show, complete with Bobba Fett shooting flames on stage. Beattie says that this production was designed to feel at home on a Vegas stage. 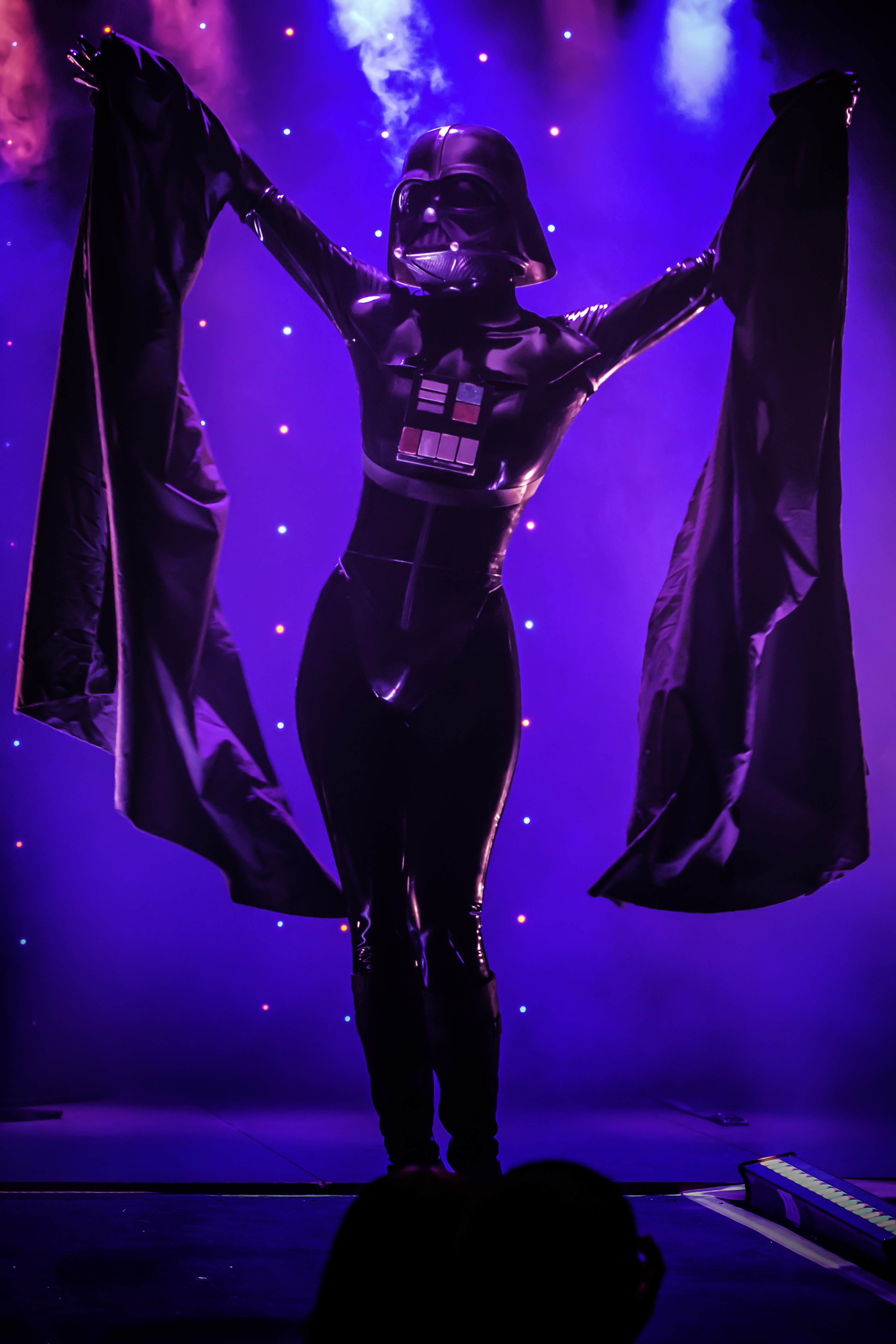 Just as the show draws on the recognisable imagery of Star Wars, the soundtrack is also made up of iconic, modern songs that relate to the traits of each character.  Beattie wants the audience to be able to connect immediately with songs that are familiar and are likely to have a strong association with the Star Wars characters. “It’s meant to be a trip down memory lane”, says Beattie, “that takes the best bits of being a child and the best bits of being an adult and fusing them together.”

It seems that the approach works, as audiences have been coming to the show and allowed it to grow from its small origins to a touring production that has 20 people on the road and an 8-tonne truck of props and costumes. Beattie says they find the tours work best on a circus model of going somewhere for only one or two days, selling out big shows and then moving on to the next venue. Beattie says that its definitely a show that benefits from the vibe of a larger audience, and their 2014 tour will see them playing in front of audiences from 500 to 3000, and Beattie says the fun of being in the audience of the show is an experience of its own.

While the product is a lot of work to take on the road, Beattie says that The Empire Strips Back is a labour of love borne of a personal love of not only the Star Wars films, but also the expanded universe of the novels and comics. The show focuses on the original trilogy for their broader appeal (Beattie says it was some sweet revenge to simply ignore Jar-Jar Binks) and for Beattie it has been a fun ride to producing this much larger show that he knows audiences will enjoy.

The Empire Strips Back will playing at the Enmore Theatre in Newtown on the 9th and 10th of May before visiting Perth, Albury and Melbourne. For dates, venues and tickets, visit http://www.empirestripsback.com/