Staging Shows from Recent Memory – From Pro to Amateur

One may assume that putting on a show that has been seen recently on the professional stage is an intimidating task for an amateur theatre company. However, this is not true for some of Melbourne’s best companies as they announce their upcoming productions of well-known, well-remembered favourites. Theatre People spoke to two companies experienced in this, Babirra Music Theatre and Footlight Productions, to discuss why they choose to take on the task of producing prominent shows still strong in Melbourne’s consciousness.

The warning signs are well and truly present in the back of all our minds to steer clear of recently produced professional shows – performers are often told not to audition with songs from shows seen on the Broadway stage in the past 5 or so years, and there seems to be an unspoken buffer period around recent shows fuelled by the ever-present fear of comparison. It could certainly be seen as a bold and brave move to dare to produce a recently seen professional show. But perhaps these fears are unfounded. Many amateur companies, performers, and audiences alike see this phenomena as a unique opportunity in many different ways.

Above: Legally Blonde (featuring Lucy Durack) closed a professional Australian run in Melbourne in 2013. It has since gone on to become one of the most highly sought out shows for amateur companies in Australia!

Artistic director of Footlight Productions, Peter Wills, spoke to us about their upcoming production of Mary Poppins, and the unique advantages he feels are present for all involved.  “Mary Poppins… gives many performers the chance to feature in what is undoubtedly one of the world’s favourite musicals. We have a very loyal and dedicated production team who will welcome the challenge of staging such a technically difficult musical.” But what about the task of producing a show that was staged professionally only a few years ago? “In many ways it is an advantage,” explains Wills, “because audiences who loved the professional production are likely to come to the local Geelong production to enjoy the experience again. Mary Poppins is timeless.” So much of the sublime theatrical experience is the act of chasing after that intangible magic memory in our distant past, a kind of nostalgia, that we originally experienced in childhood; like revisiting that moment when you first witnessed Poppins glide down on her umbrella from the sky and into the fabric of our lives forever. Footlight Productions are also currently producing Miss Saigon, another well-known and recently seen favourite. It seems for their 2015 season that experience is the key to success. 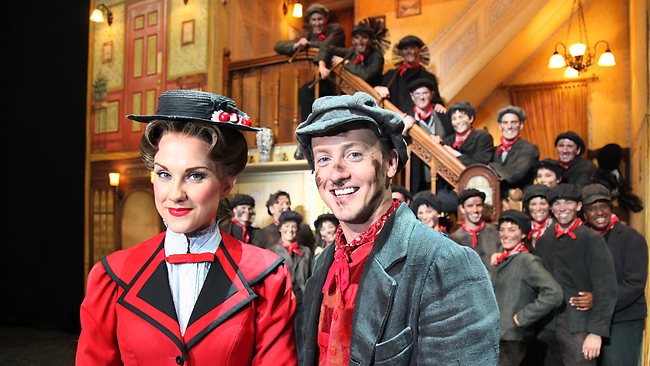 Staging such productions has other benefits, too. Owen Davies of Babirra Music Theatre spoke to us about their success with producing shows that have had recent and prominent professional exposure. Babirra are also producing Mary Poppins, as well as The King and I and The Boy From Oz, following in their own pattern set by their stagings of family favourites such as Annie and The Phantom of the Opera. Their confidence and professionalism diminishes any possibility of insecurity, as these choices come from a place of thorough research into audience experience. “People who come to the Whitehorse Centre don’t generally go to see city shows. They like the fact that with us and others like us they get a good quality show at a fraction of the price, in a comfortable venue, with a show only a tiny bit less than what they might see on the professional stage.” Their emphasis on traditional, popular shows ensures the broadest appeal to their audience. The empowerment in knowing one’s audience cannot be understated, along with the benefits of high production values and, again, a solid foundation founded upon extensive experience. “I think a professional season of a show helps us. It puts the name of the show into people’s consciousness.”

These ventures do not come without risks and challenges, such as higher audience expectations. However, any and every show, professional or otherwise, is accompanied by risk – it seems to be the only constant that exists in the world of theatrical endeavours, a world so dependent on the opinions of others, framing our experiences as creative people. There is much to say for the production of these hugely popular, recently professionally-produced amateur musicals, for they prove that the classic formula for theatre is still alive and can still move people. Not every work of art must be experimental or ground-breaking. Sometimes, putting on an almost-professional traditional production, pleasing audiences, and attempting to reignite a nostalgic spark in them, can be enough to achieve something great. It is still a risk, and bold; though, in Owen Davies’ words, “don’t hesitate to look at shows that have had professional exposure,” – that is, if you know you can meet those higher audience expectations.

VIDEO: An Officer And A Gentleman – Blue Carpet Special