Featuring a small cast of 15 talented performers, Waterdale will present Little Shop of Horrors, opening on the 10th of July for a limited weekend season. First performed by Waterdale 10 years ago, this production of Little Shop marks the 10th Anniversary of the company.

Theatre People spoke to Tyson Legg (Seymour), Gemma Foster (Audrey) and Rachel Collins (Director) about their show and why they are so happy to be bringing this story to life. 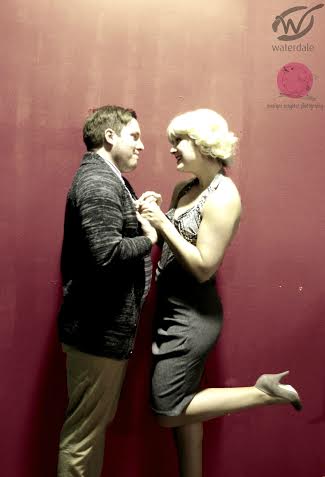 Above: Tyson Legg as Seymour and Gemma Foster as Audrey.

Why did you want to audition for/direct this particular show?

Tyson: It's a classic and one that I've wanted to perform in since I first saw it. I've been involved with a few productions over the years but never on stage, so I thought it was time to remedy that!
Gemma: Audrey is a role I have wanted to play for quite some time – she's such a gorgeous character. I had an extremely busy term directing our Grade 5/6 production at school (along with those cheeky reports) but I figured if I auditioned and got the part, it was meant to be.
Rachel: This year marks Waterdale's 10 year Anniversary. Their first show was Little Shop (albeit on a much smaller scale and budget!) so I feel pretty lucky to be entrusted to take the helm as director for this show. It’s a really important milestone for those who were the founders of the company.

Do you remember when you were introduced to Little Shop of Horrors?

Tyson: I saw the movie when I was quite young. It was fun but I never really thought twice about it. I can't even remember the first production I saw live it was so long ago, but it made me revisit the film and it's now a favourite of mine, despite the cop out ending!
Gemma: I've actually only seen it once before – I think it was at Warrandyte High School many, many years ago.
Rachel: I fell in love with Little Shop of Horrors when I first saw a school production of it many years ago. I was perhaps 14, an alto with a penchant for big soul/motown numbers and "geeky" boys – it was bound to make an impression. Aside from the amazing score, I really like the way Little Shop manages to broach dark, confronting subject matter in a light, comedic entertaining way, making it accessible to a wide audience. Drawing on the legend of Faust (who made a deal with the devil, exchanging his soul for knowledge, wealth and power), we follow Seymour's journey as makes makes increasingly questionable moral choices in the pursuit of fame and fortune, with the blood hungry plant, Audrey II as the Devil-esque enabler or the provider of the rewards.

Are you basing any character interpretations or aspects of your show on the popular film adaptation?

Tyson: I'm trying to stay away from any interpretations I've seen in the past. It's a little tough considering how many times I've seen the show but I thought it was important to find my own version of Seymour and not somebody else's. 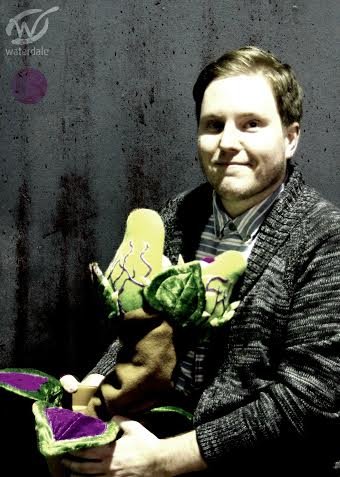 Above: Tyson Legg as Seymour with a young Audrey II.

Gemma: Ellen Greene's Audrey is iconic (and amazeballs) – I wouldn't go near it! In all honesty, I haven't watched the movie in full before, even though I own it.  I am a big fan though of using YouTube to watch as many different variations of a character as I can and then building from there.

Rachel: As a really popular show that has been performed many times locally in the past few years, I've encouraged the cast to really consider and use the text in developing their interpretations of these much loved quirky characters. We've aimed to maintain the humour and caricature, whilst also finding ways to allow the audience to connect with the real emotion, the human aspect of these characters.

How has it been to work with such a small cast?

Tyson: It's a wonderful environment to work in. Everybody is lovely and very focused on putting on the best show possible.
Gemma: I think I'm mostly drawn to smaller scale shows – I can't remember the last time I was in a big ensemble show. The type of musicals I enjoy are generally smaller, quirkier productions where there's less people, it's a closer experience and you get the chance to do a lot. And as much as I love them, I'm fairly useless in a big dance number, so that may have something to do with it!
Rachel: I've loved working with this cast and creative team – it's been a very relaxed process with lots of opportunity for collaborative creative input. It's the first time that I've worked with Sophie Antoniou (musical director) and Emma Kiely (choreographer), both of whom are hugely talented and very generous in their contributions to the creative process. We are also very lucky to have Andy McDougall building our very own Audrey II for this production! It's been so exciting watching the plants come to life – it feels like every time we enter the rehearsal space it's gotten bigger and more intricate and closer to completion.

Ticketing information for Waterdale's Little Shop of Horrors can be found by following this link.

Photos from ‘Return to the Forbidden Planet’