So much to love about Once 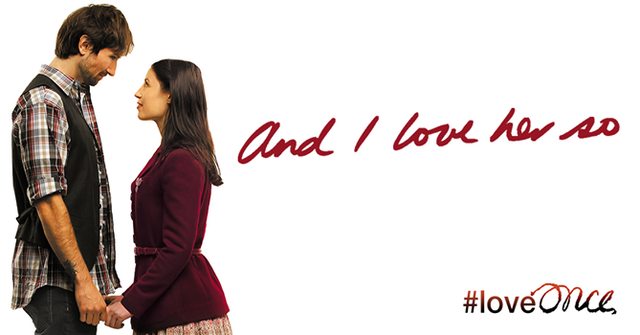 Sitting down for a coffee with Madeleine Jones and Tom Parsons, the stars of the musical Once, one thing is certainly clear – the two share a special chemistry off stage as much as their characters of Girl and Guy share on stage. In good fun, Parsons refers to Jones as “the little sister I never wanted” and Jones is quick to add Parsons is “like an extra big brother I never wanted.”

The pair refer to each other as great mates and, as we chat, they share some of the backstage “shenanigans” that happen from time to time. In the seconds backstage when rushing between scenes there might be a fun little moment between the pair. Now that the show is well into its season, the cast can afford to relax a little backstage but still be incredibly serious on stage – Girl is Czech, she is always serious. Ultimately these fun moments behind the scenes help to keep the cast fresh and ensure they maintain a high standard of performance for every single show, knowing each show brings a new audience. 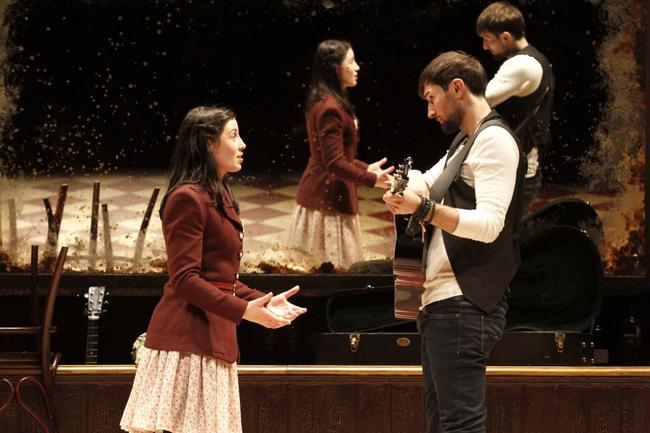 Mind you, there are plenty of fans of Once who have seen the show multiple times. Parsons thinks they all come to see Jones – because, as he explains, "They all want to be like Madeleine." But watching a crowd of fans at stage door recently, I think Parsons has his own legion of fans. (The word "rock-star" came to mind.) 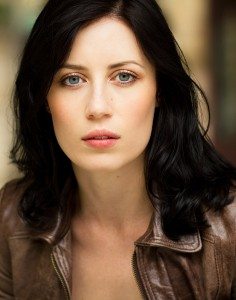 Growing up, Madeleine Jones always wanted to be a performer. She'd put on concerts with her neighbours, charging family members to attend. Music has always been a big part of her life. Her three older brothers are all musicians and she comments there was always something music-related happening around the house, whether it be violin practice or her brothers playing punk rock in the lounge room.

Jones got a taste of life on the stage doing community musicals through her high school years in the Blue Mountains – her first being Jesus Christ Superstar. It was during this time she decided she wanted to go to drama school and be an actor – graduating from Actors Centre Australia (ACA) five years ago. Jones acknowledges sometimes it's a hard occupation but the rewards well and truly outweigh the challenges. 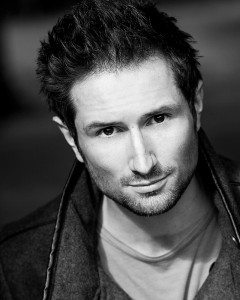 Through his teen years, Tom Parsons was in a lot of high school bands, including one called Team Scruff Bag. Jones laughs as she adds, “Oh how you've changed!”

Parsons says his school band mates were all “clever chaps” who went to on to study science and computers as prestigious places like Oxford. Except Parsons. After deciding a career in retail wasn't his thing and knowing he wasn't likely to be academically successful, Parsons decided to audition for Mountview Drama School. Mountview is one of the UK's most prestigious drama schools, producing renowned graduates such as Dame Judi Dench. Needless to say, it's a difficult drama school to get into.

Parsons turned up for his dance audition wearing ripped jeans and a pair of Converse, surrounded by young men wearing full-on unitards and dance gear, who looked him up and down, wondering who this scruffy misfit was. Mountview was the only place Parsons auditioned – and he was accepted. It secured his path to land him where he is now in Australia performing the lead role of The Guy in the award winning musical Once.

Once is very much an ensemble piece and thankfully the whole cast have a great bond and everyone gets on very well together. The pre-show stage routine is a unique experience and patrons with stalls tickets can go up to the working bar on stage, have a drink and watch the entertainment begin. The first songs change order with each show – but the final three are set and deliberately lead in to the formal start of the show. 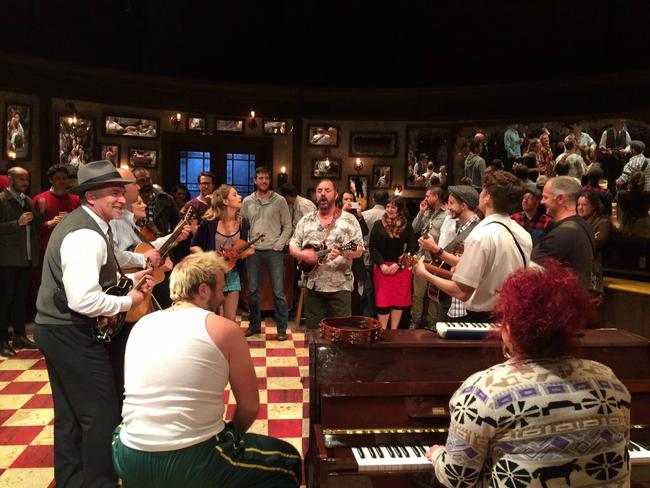 These last songs are not only important to create the mood and atmosphere– they are also used by Parsons to prepare for the heart wrenching, emotional delivery he needs to give of his opening song, “Leave.” He uses these songs to get physically riled up and latch on to the emotional position required to be ready to deliver “Leave.”

Parsons acknowledges he used to be physically drained by the end of each show, but has now become show fit. He describes “Leave” as being perfectly written, adding "as long as you're committed to what is written as a performer, it's all there." It's quite possibly his favourite part of the show. 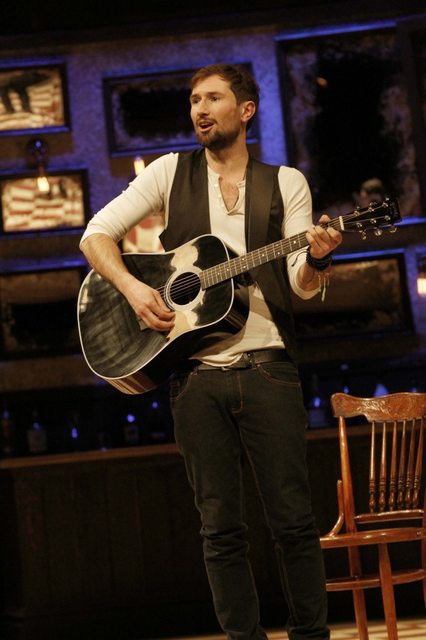 Once is unlike any other musical and there is a certain unique beauty and intimacy to the show. I asked the pair if they were conscious of the audience reaction to the show at all – they comment sometimes they can hear people sniffling and after certain scenes there will be a release of emotion and the cast can hear the audience finally having the opportunity to breathe and relax. This audience reaction is a really special moment for the cast.

Jones adds it's really nice knowing that people have come to this show, shared an experience and have felt something. She hesitates to say they're giving the audience something because Once is not a show you simply sit back and be entertained by. Instead, it's a show you invest in and experience. The cast can feel when the audience is passively sitting back and not willing to come on the emotional journey of the story with them.

Having seen the show twice now, Parsons turns the questions to me, asking if it is difficult for the audience to know when to applaud? We talk about the fact the audience can be so caught up in the emotion and heart of the story that they may not want to break that tender moment with applause. The one moment in the show that pretty much always delivers a huge applause from the audience is the hauntingly beautiful, multi-award winning song, “Falling Slowly.” 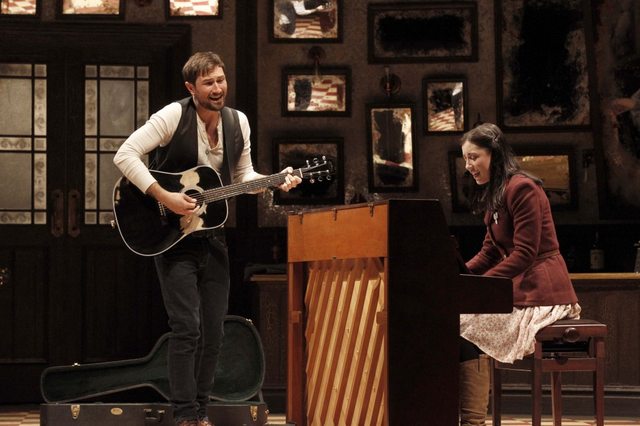 The show itself causes different reactions for its audiences, with audiences seemingly divided about the ending. There are those who want to rewrite the ending to have the typical Hollywood closure of Guy and Girl kissing and living happily ever after. At the launch of Once, earlier this year, composer Glen Hansard explained he was very clear that in selling the rights of this story to be produced into a musical, Guy and Girl would not kiss at the end, referring to this choice as Girl being true to herself and remaining the heroine of the story.

The cast love that the story makes people think about what might happen next  and it's not the usual ending to a story.  As Jones explains, life is full of responsibilities and Girl remains true to her daughter and the man to whom she made her vows. While Parsons and Jones were never actually directed not to kiss it just seems better to them to not do so. Parsons describes his character of Guy as being being multi-faceted and undergoing a lot of change and transformation through the show. Jones considers Girl is somewhat kooky, but a strong young woman with a lot of integrity. Director John Tiffany refers to Girl as the “Ambassador of Honesty” – the one who says what we wish we all had the guts to say. 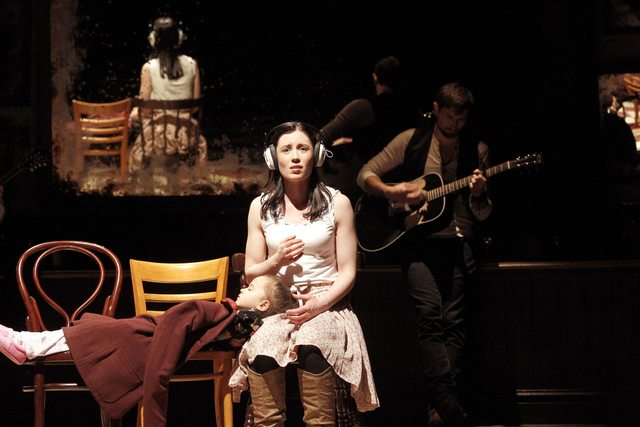 Once will finish its Melbourne season on February 1st and sadly will not tour nationally. Don't miss your opportunity to see this beautiful and moving show. This is must-see for musical theatre fans – Once is unlike any other musical you've seen before and quite possibly will see again for quite some time.

There Are Trees That Are Dancers