RENT offers the next step

New theatre company Next Step Productions proudly announces its debut production:  RENT. Next Step Productions is about providing performers with further opportunities to not only develop and showcase their talents, but also be noticed by agents, other producers and perhaps most importantly, by audiences.

Producer Leigh Barker chose RENT because it's a musical that really resonates with him personally. Barker was involved in a production of RENT about 6 years ago and it's a musical he has always loved. He has a number of friends living with HIV and although the show is probably best known for this theme, for Barker RENT is a story of hope and love. RENT is about living for the day and having no regrets. Although other musicals were considered for their debut production, it was RENT he kept coming back to; a show he is passionate about.

This production of RENT will be stripped right back with a minimalist set to allow the spotlight to really focus on the performance of the individual actors. The Chapel Off Chapel venue will provide an intimacy that would be lost in a larger theatre.

The cast includes Cameron MacDonald, Melanie Ott, Leigh Barker, Gemma Purdy, Steve Simmons, Shaun Kingma, Zuleika Khan and Ashley Rousetty. While avid musical theatre fans may recognise a few of the cast, they are hardly household names and are still waiting for their big break. Barker says they were looking for a cast of passionate and enthusiastic musical theatre performers with considerable experience in professional and/or community theatre, but really haven't made it into a significant leading role yet. Some of the cast are without an agent, but Next Step Productions hope to change that, with a number of agents lined up to attend performances. 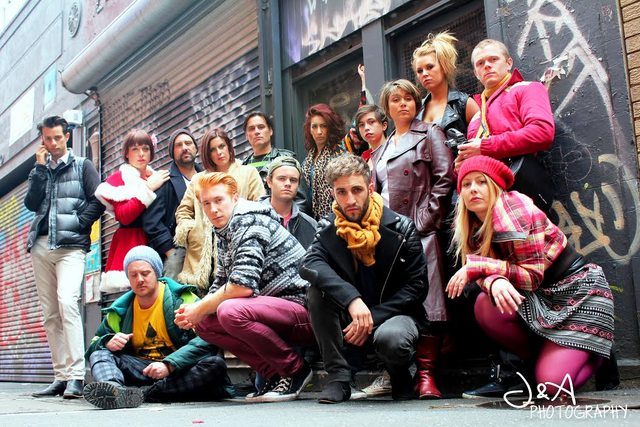 Another aim of Next Step Productions is to help provide an opportunity for cast members to literally take the next step after this season of RENT. Although most of the Melbourne musical theatre scene seems to be cast for 2014, there are still three seasons of The Production Company. Chairman Jeannie Pratt is a very committed supporter of the development of new and emerging theatre talent and is very enthusiastic about this new theatre company.

Next Step Productions hope RENT will appeal to all ages. It is a musical with its own cult following and Barker expects there will be many audience members who remember it from years ago when it first appeared as a ground-breaking musical tackling previously taboo topics. But he also hopes it will attract a newer and younger audience, as well as the more established musical theatre audience.

See RENT now, and when these performers careers really take off, and they land that big break, you can remember back to when they took that all important next step.

RENT runs from the 9th to the 18th of January, 2014, as part of the Midsumma Festival, and is associated with Vic Aids to help raise funds for the education, preventation and research of HIV/AIDS.

For more details or bookings go to www.chapeloffchapel.com.au or www.midsumma.org.au

Andrew Blackman Is In The Pit With Medea