When the cast of WICKED was announced last year there was one glaring omission: the role of the Wizard. In fact Reg Livermore, also wondered the same thing! Livermore was first approached about playing the role of the Wizard back in the early days of the show, but at the time he was already committed to performing in My Fair Lady and hence declined the offer. Last year he was invited once again to perform the role but says the timing didn't feel right.

Livermore was preparing for retirement. It had been two and half years since he had last performed; in a play he had written himself in which he and Nancy Hayes starred, called Turns. Livermore describes the show as being a bit of dementia mixed with some pantomime. Despite feeling it was a great little show and an extensive 34 city regional tour, the reality was playing to small audiences in towns where people often didn't know they were there. Rather than blaming the economic times, Livermore blamed himself, assuming no one wanted to hear what he had to say anymore. He went away to lick his wounds – something he says is just part of what you do in the entertainment industry – and prepare for retirement.

He was considering what retirement would mean – he didn't want to be out of the theatre for a couple of years and then go back to it and then wonder again if it was all over. Then the call came, yet again, to take on the role of the Wizard in WICKED. This time it felt right. Livermore decided to accept the role and put aside those retirement plans. 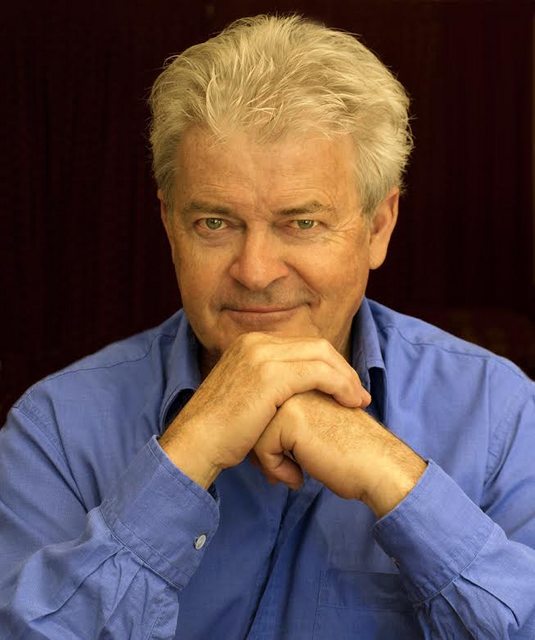 Livermore has enjoyed an extraordinary career spanning more than 60 years. As a young child Livermore always knew he wanted to be an entertainer. He started with the family living room and backyard concerts – anyway to grab an audience and force them to watch him. By his teens he was hiring halls to put on his shows. Pantomimes were a great influence to him as a child and then he started going to see the big “Broadway” musicals like Oklahoma and Annie Get Your Gun. It was a teacher who mentored the young performer through his school years and enabled him to see some of the shows his parents could simply not afford.

In his early career Livermore gave standout performances in Hair and Jesus Christ Superstar, paving the way for his role of Dr Frank'n'Furter in the original Australian production of The Rocky Horror Show. Livermore then went on to create his own one-man shows, establishing himself as one of Australia's greatest entertainers. Livermore was included in a list of the top 100 Australian entertainers of the century. In more recent times Livermore starred in the Mel Brooks musical The Producers and the Opera Australia production of My Fair Lady.

After preparing for retirement, Livermore says at his age, it is nice to be asked to perform and have the opportunity to be part of the biggest blockbuster musical of the decade. WICKED is a huge show, and bigger than anything Livermore has ever been part of. He feels he couldn't manage something like The Producers again. Although that's not saying he wouldn't be game to try it again, he just knows he would suffer for it. So this latest role as the Wizard of Oz is ideal.

Livermore describes WICKED as being a wonderful script. While the music carries the show, he feels the spoken dialogue is quite sophisticated. Livermore prefers a role that has a bit of “meat to it.” His website includes extracts from his autobiography and gives a fascinating insight into his career. In the title role in Barnum, Livermore says just fifteen minutes into the show and that was it – it was simply one musical number after an another. While the Wizard is a cameo role, Livermore describes it as a nice one with a lot of possibilities. He says,  each person will bring something different to a role – he's not Bert Newton – so there has to be a difference between performers in roles.

When asked to describe whether the Wizard is inherently a good guy or a bad guy, Livermore responds that the Wizard doesn't really know who he is himself. He's simply an ordinary and simple man who happened to be blown into Oz by balloon. The locals think he is some sort of Messiah descending from the heavens in his balloon and refer to him from then on as Wonderful. Clearly this is better than what he was doing before and he decides to stay in Oz, but he remains an ordinary man. He requires some sort of magic to help him and so he is seeks out Elphaba and her powers.

Livermore is very excited to be part of WICKED, and feels very honoured and fortunate. Often older characters are simply played by younger performers dressed up to look older. He laments there is not much in the way of roles for older performers – so he feels lucky to be doing this one. He does suspect younger audience members will be asking, “Reg who?” then having to google his name to find out.

The thought of retirement again surfaces as Livermore proposes this may be his final show, and so he plans to enjoy it. So too, will his fans. Social media was buzzing with excitement when Livermore was announced in the role. Livermore is very pleased to know they weren't saying, “Not him again!” and is quite delighted with the positive response to his casting as the Wizard.

These days Livermore doesn't get to the theatre. Living two hours out of Sydney means a trip to see a show feels more like a three day march when you consider the time to get there and back, plus a meal and the actual show itself. He feels he has seen enough theatre to be thoroughly satisfied.

Looking back at his career, Livermore often has trouble crediting himself with all that he has achieved. When he is away from the theatre, doing his gardening and his painting and his cooking, it feels like it's a whole other life and a world away from where he is now.

Livermore has been busy in the lead up to opening night. Not only were there preview shows with various changes to cast members, but  media events including a greening of the city at the start of the week with Melbourne's Lord Mayor, Robert Doyle. It was the first time the general public had the opportunity to see Livermore in full costume as the Wizard. 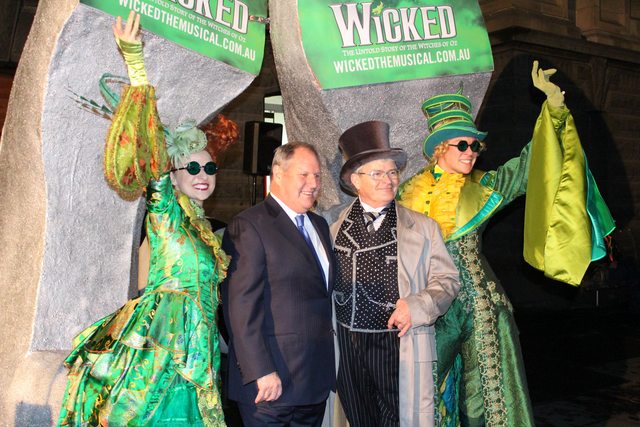 Livermore joins a cast who have already performed in this show – some on the recent tours to New Zealand and through parts of Asia, while others were in the original Australian production. It is a cast described by composer Stephen Schwartz as the best he has seen since the opening cast on Broadway. 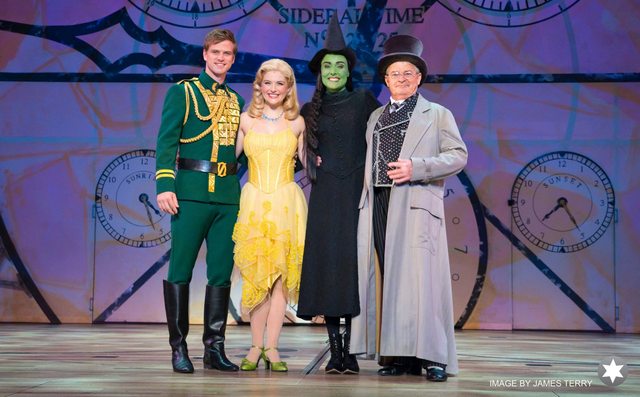 Steve Danielson as Fiyero, Lucy Durack as Glinda, Jemma Rix as Elphaba and Reg Livermore as the Wizard. Photo by James Terry.

For more information about Reg Livermore go to http://reglivermore.com/index.html

It’s Spring At The Butterfly Club

MUMCO Gets Dirty with some Rotten Scoundrels!