Packemin Props: A look behind the scenes of Packemin’s current and recent productions!

The Costume Designer for all of Packemin’s shows since the company's 2011 inception has been Cassandra Pascoli.

All of the props in their shows have been managed by the late, and greatly missed, Karen Hooker or her daughter Jody Hooker.

Theory behind the Phantom cloak – Cassandra Pascoli
“The cape and mask hides everything. Think Edwin Drood and Sherlock Holmes – the cloak is a metaphor and keeps them hidden. It’s the mystery. Depending on the actor and director’s interpretation of how vulnerable it will make him feel, the Phantom’s cape is only taken off by force or when necessary to reveal him. He doesn’t want to expose himself, which is why he’s in the shadows.

“Sometimes the fabric used is furnishing material with a heavy weight. Cloaks are meant to be functional, to be warm and to cover you, but theatrically what we care about is the silhouette and how it moves. So ours is made of a lighter fabric. You’ve got the drama of the collar, then this long, flowing and foreboding cape. The swoosh of the cape is important too as it makes his entrance and exit so much more dramatic. If you use a fabric that is heavier, it will be realistic, but it won’t do anything for the eye.” 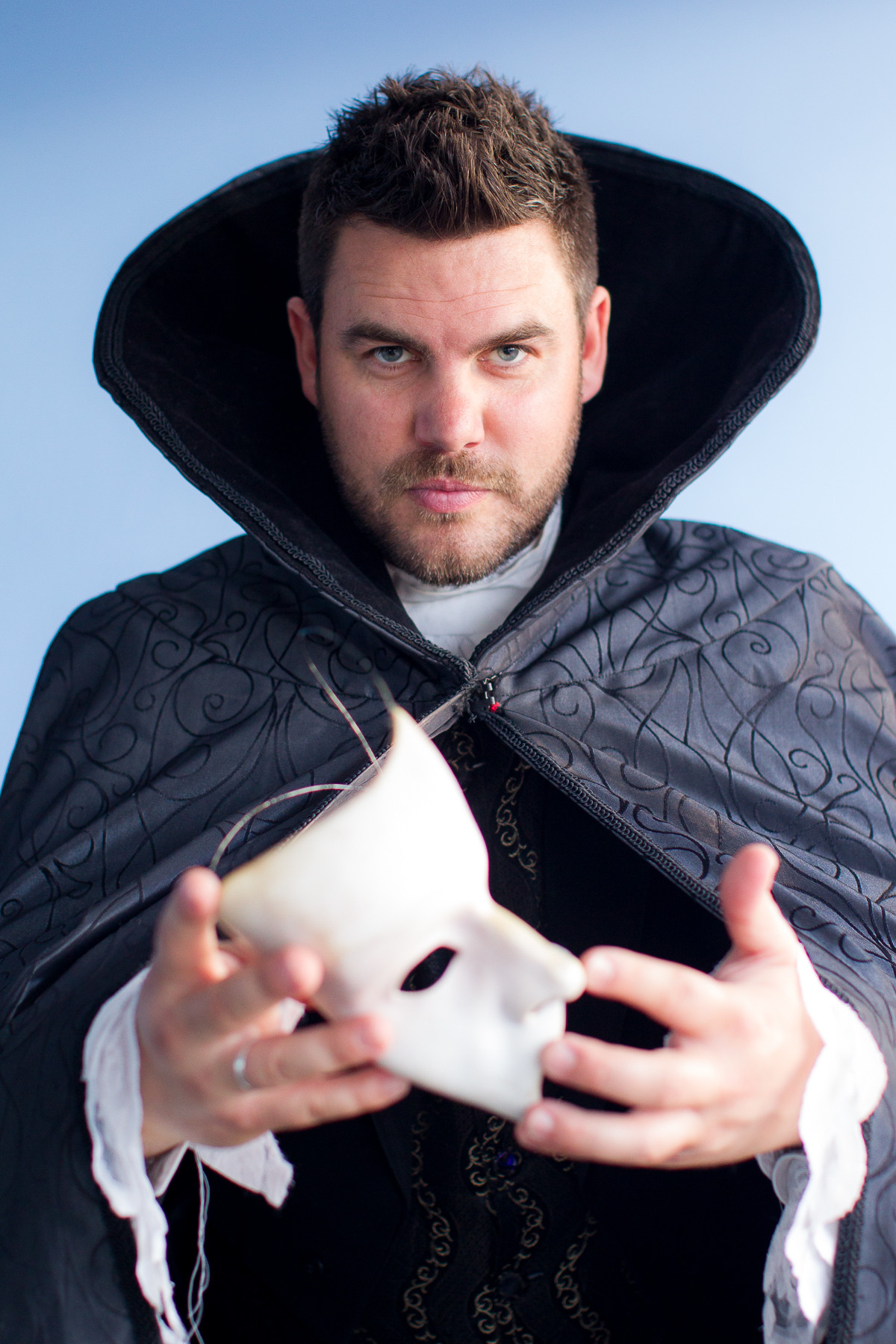 Above: Ben Mingay as the Phantom.

Packemin Productions launched at Parramatta Riverside Theatres with Joseph in 2011. For this 2015 Youth production at The Concourse Chatswood, Pascoli’s original costume designs have been used again, with some minor changes by Costume Co-ordinators Audrey Currie and Kate Lemaire.

“One of the changes made from 2011 is the lining of Joseph’s coat. It was a massive work-in-progress at the time and we didn’t get a chance to line it,” says Pascoli. “Just before opening night for this production, Kate had some time and decided to include the golden lining to finish it off and fit in with the lyrics.” 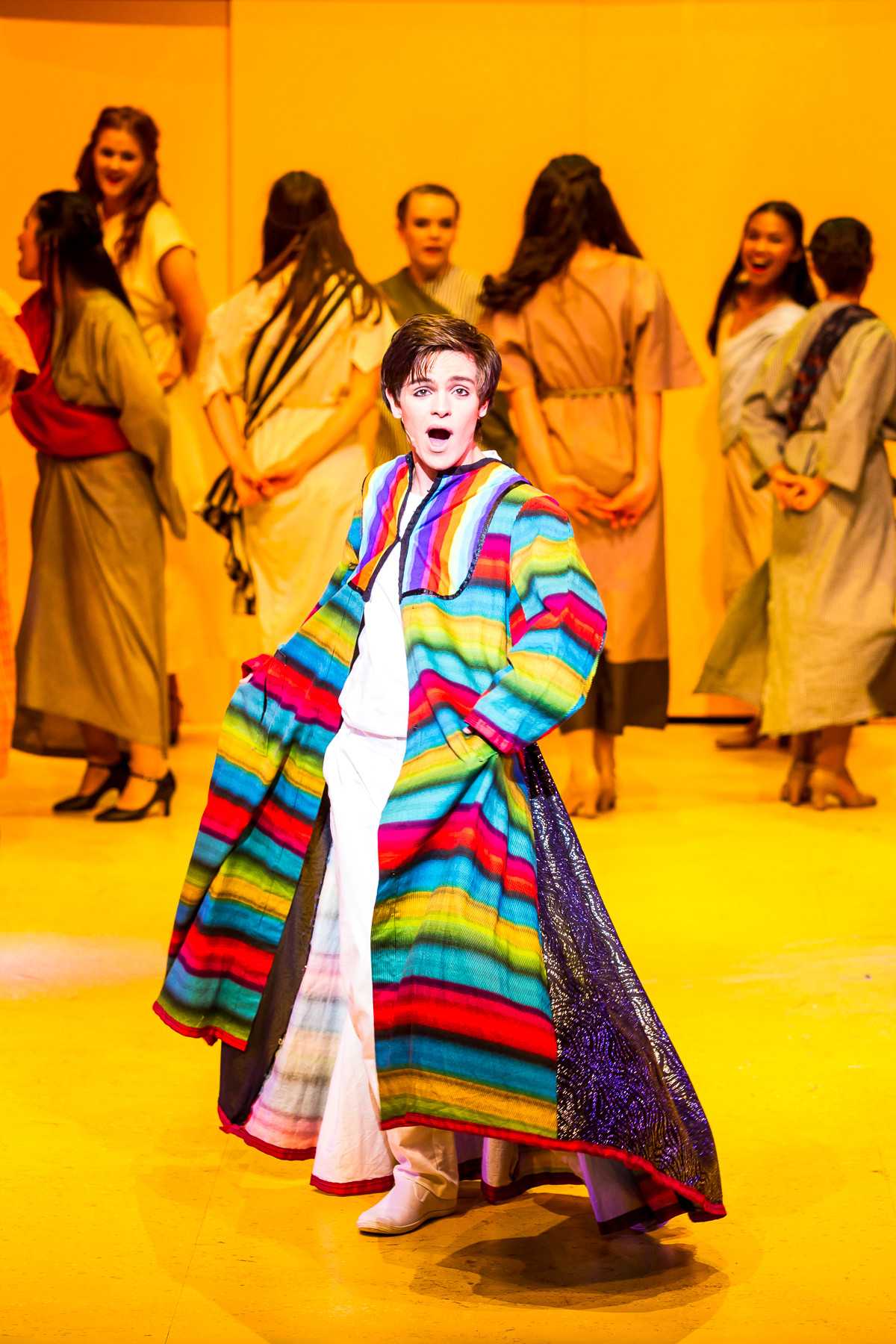 “The musical Joseph has clear groups – the kids, the brothers and wives, Egyptians – so it’s a case of making a distinction between them. The brothers and wives have matching religious garb in earth tones, then you move to the crisp white and gold of the traditional Egyptian,” says Pascoli.

To demonstrate unmarried Joseph’s role as Jacob’s favourite son, Joseph’s Canaan outfit matched his father’s. Long, simple tunics remind the audience that Jacob and his sons are simple farmers. Moran recounts of his costume, “Every time in the song Canaan Days, just into the second verse, I do a little leap as I dance across the stage, and every time, the velcro at the back goes 'riiiip'. The audience don’t hear it and they don’t see it, but I can feel it and I know it’s happened!” 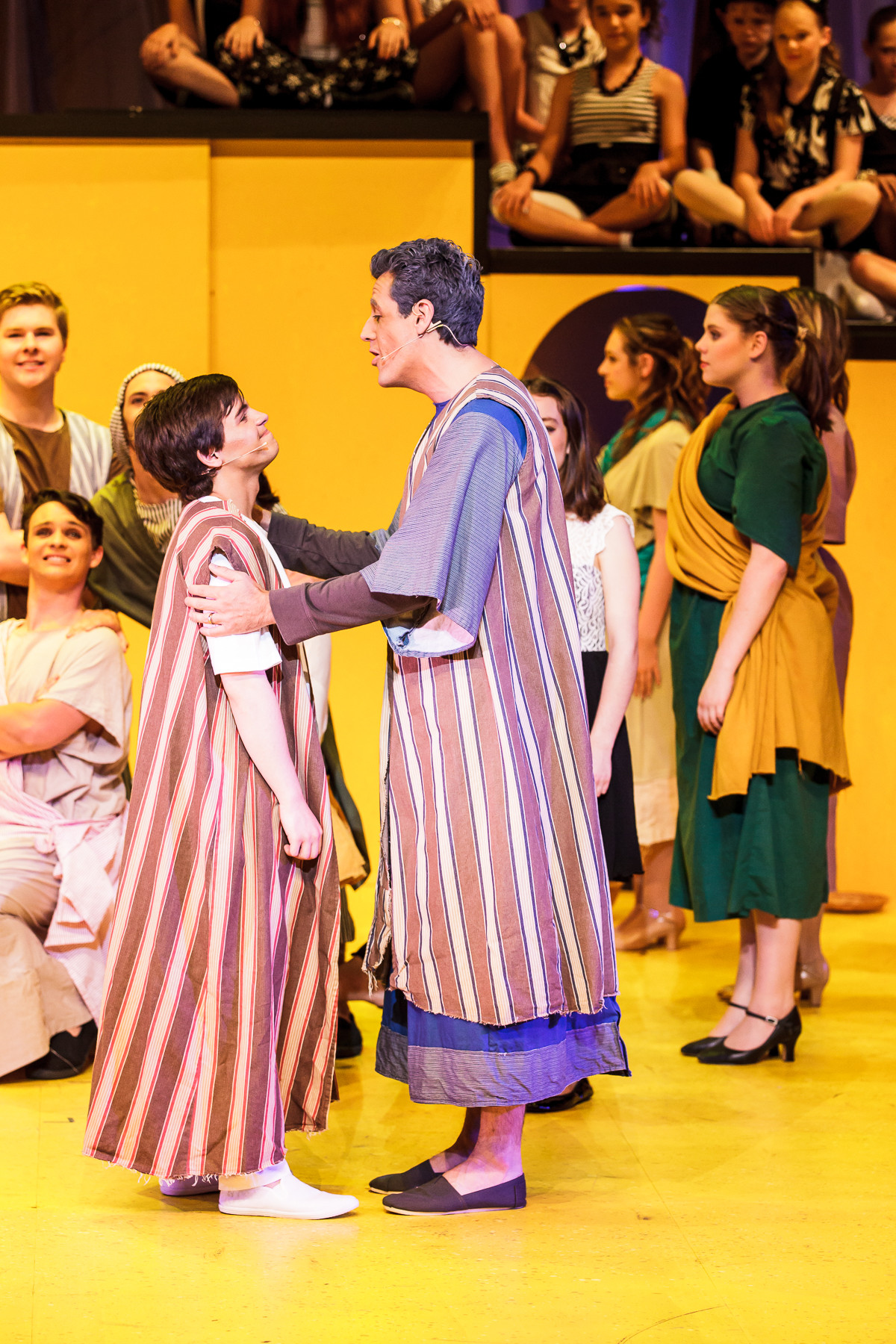 Above: Sam Moran and Imraan Daniels

The children’s cast and the Narrator are observers in an‘other world’ which is separate from the main events on stage, so their costumes were monochrome to contrast the bright and bold colours in the main story.

On stage in rehearsals, it became clear that being close to the age and height of the children’s cast posed a problem when dressing 14 year old Harmony Lovegrove as Narrator, as she became lost amongst them in her matching monochrome. Pink rosettes were added to help her stand out, as pink is a colour not dominant in the rest of the production. 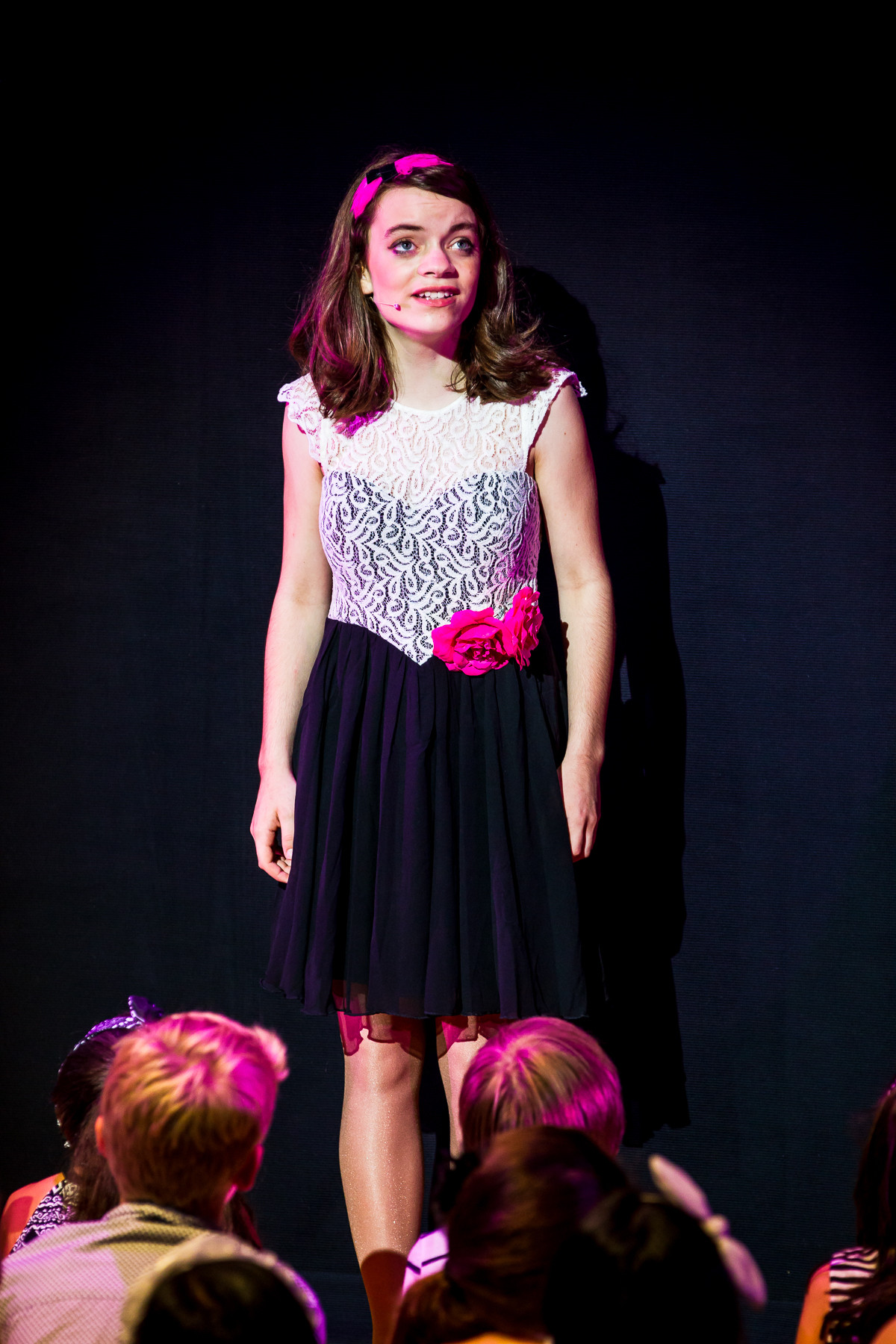 Above: Harmony Lovegrove as the Narrator

Packemin’s 2011 production had professional Elvis impersonator, Mick Gerace, in the role of Pharaoh. His costume was ordered from the USA and Mick provided his own accessories and wig, which are often very personal to Elvis impersonators. This 2015 production features a younger, shorter Henry Wright in the role, and so another suit and wig was ordered, not made easy by the fact that the world-famous Parkes Elvis Festival was on the same weekend as the opening of the show! 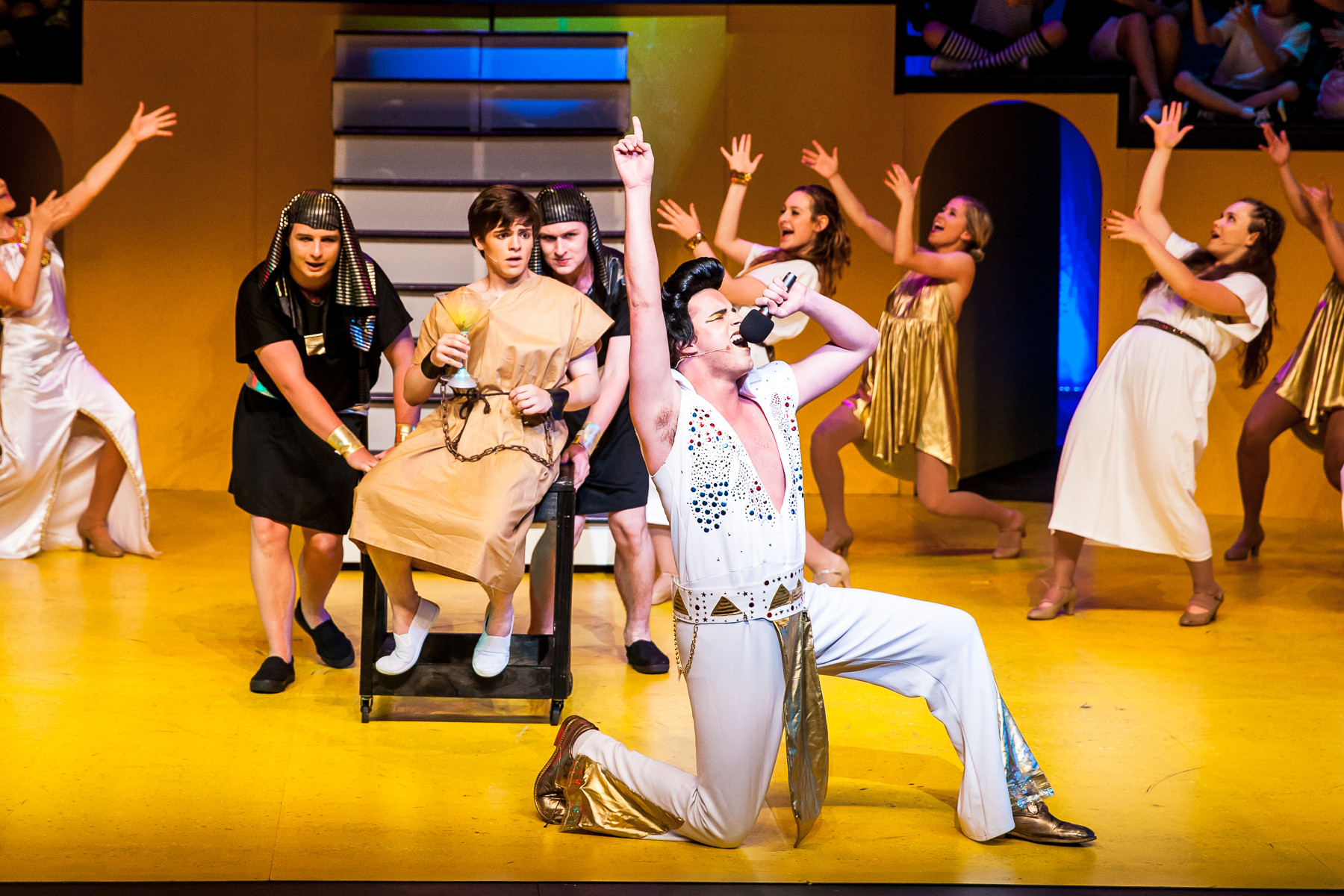 Above: Henry Wright as the Pharaoh

When a suitable wig was eventually sourced, make-up coordinator Briony Bell styled it to better fit the large personality of the character for the stage.

Most of the props from the 2011 production were reused, and where needed, new ones were sourced or made by Props Coordinator Jody Hooker
“We use real bread for the scene where Egypt is storing surplus food under the instructions of Joseph. Sourdough doesn’t go mouldy and doesn’t need to be lacquered. The basket is made for four people to carry, meaning it doesn’t fit through the stage doors. So we wheeled the basket through the door without the bread and then glued it on once we were backstage. It all has to stay on the pre-set table in the wings rather than on the props table backstage.”

Co-Director, Jordan Vassallo, recounts the close-call the production had with its life-size camel, affectionately known to the cast and crew as Reggie Carlos.

“We almost didn’t have one for opening night. The original camel we had sourced was vandalised while it was being used for a nativity display. So we turned to a props company, but that camel was shipped to us in pieces by the people who hired it before us. In the end this one came to us from Geelong and was driven up to Sydney the Wednesday before opening night. It was a very close call, but you’ve got to have a camel!” 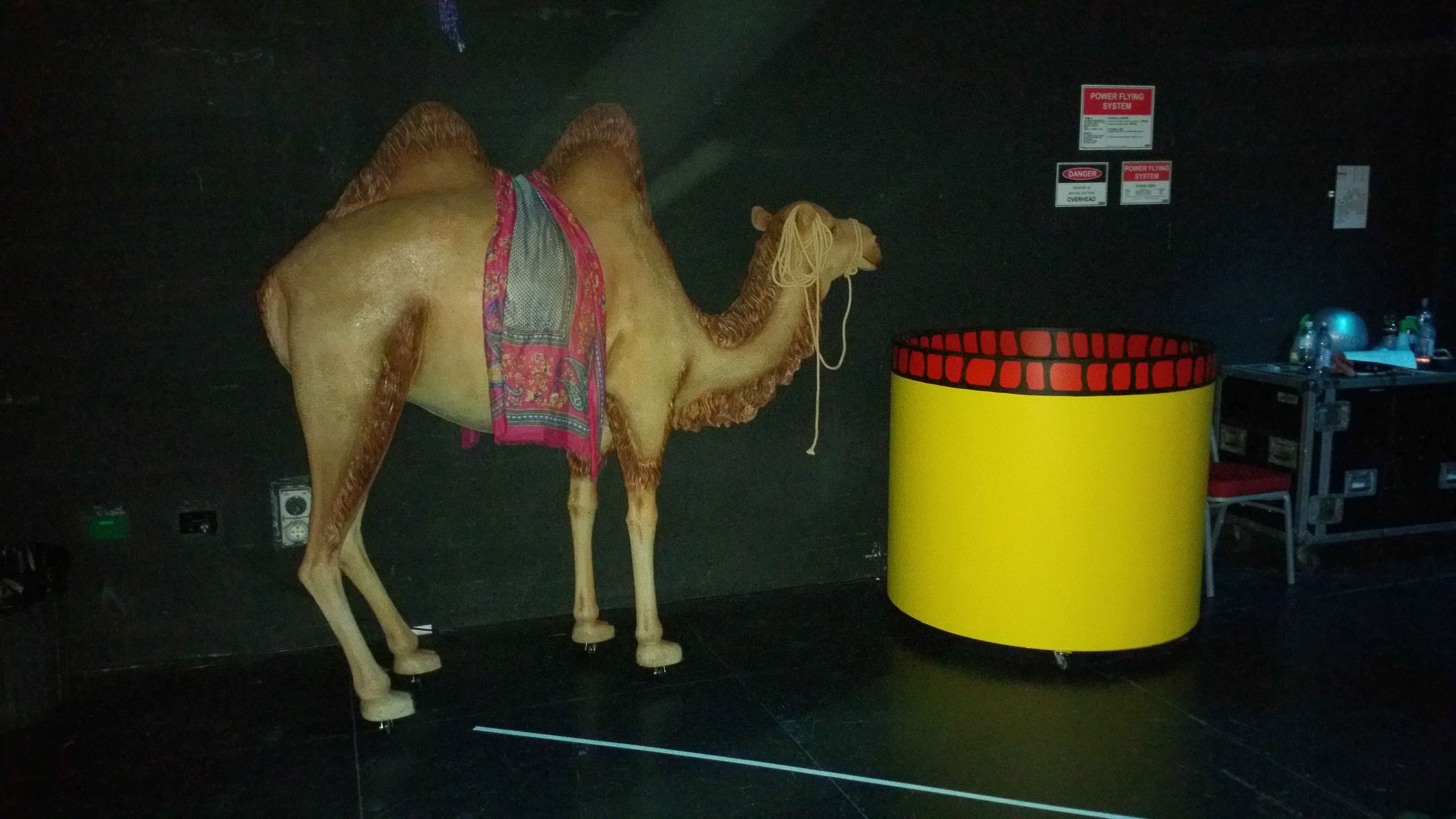 Above: Reggie Carlos the camel, taking a break side-stage.

All pictures supplied by Packemin productions.

Tickets for Packemin's production of Phantom can be found here.

Sport and Theatre – a place for us?