From the 7th of February, at Riverside Theatres, Parramatta, Packemin Productions will bring Orphan Annie to life in their Pro-Am production of Annie. Like their hugely popular productions of Oliver, Hairspray and The Wizard of Oz, Annie follows Packemin’s Pro-Am model of combining a number of professional performers in leading roles, supported by a large cast drawn from local community groups, dance schools and drama academies. 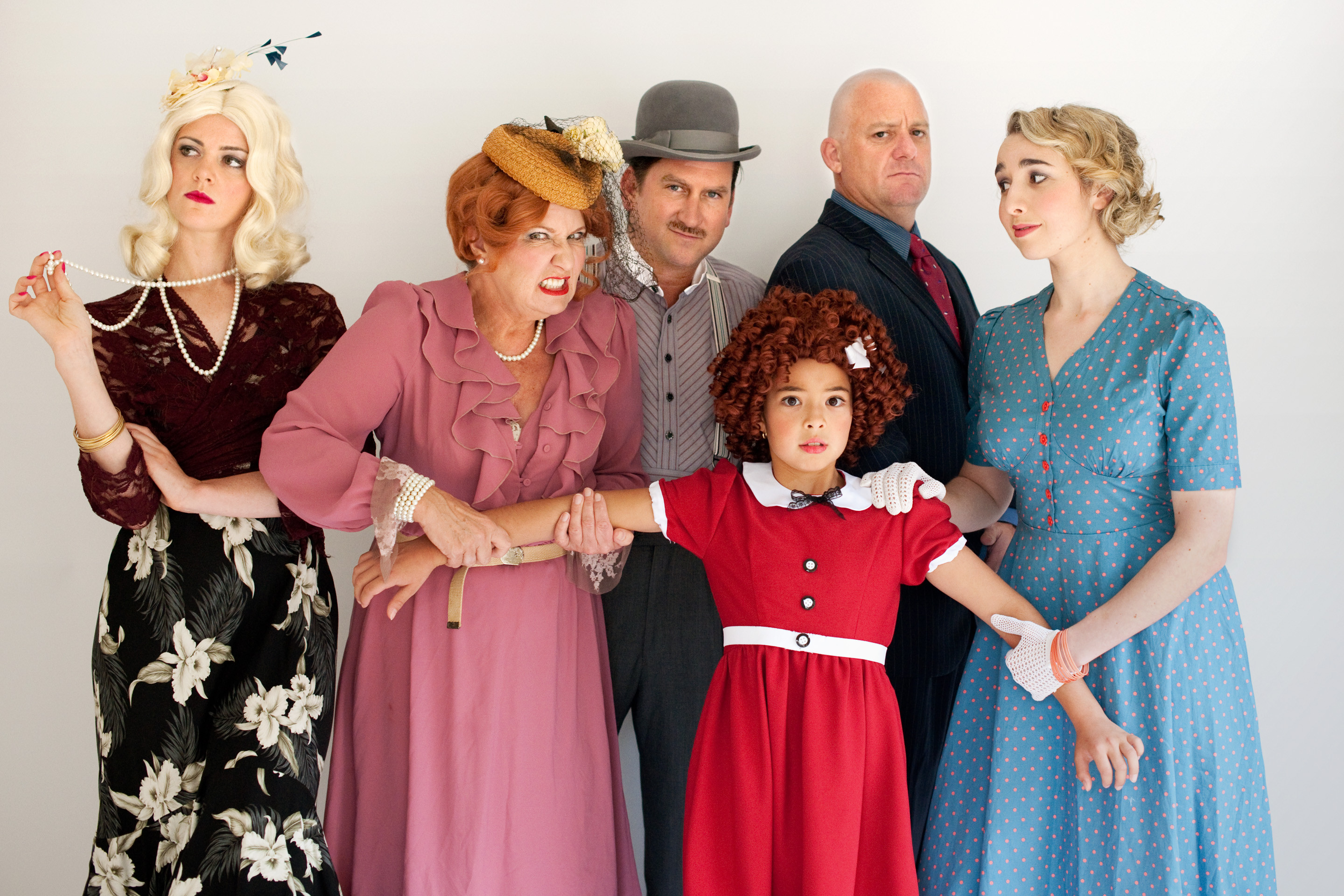 For experienced professionals Amanda Muggleton and Luke Joslin, both multi-award winning theatre performers who were involved in the long-running professional production of Annie in Australia approx. ten years ago, Packemin’s approach to staging musicals offers some interesting challenges to their usual routines, but provides some very rewarding experiences as a result.

One of the biggest changes brought about by the Pro-Am approach is the size of the cast. Apart from the leads, the show has an adult ensemble of 40 people, and there are 108 children playing orphans, divided into three rotating casts of 36 for each performance. It means each song and piece of choreography involving the children has to be rehearsed at least three times, and requires a good hand at managing not only a large cast, but a lot of children as well!

As Director, Joslin has been learning to balance the work of the

leads with such a large cast from the local community. He acknowledges that many professional performers are used to running rehearsals a certain way that isn’t possible when rehearsals have to run at different hours and spread over a longer period of time, but he says the cast have been working to high expectations and reaching high standards throughout the process.

In attempting to stage a production that portrays a much more realistic vision of 1930’s America, a time of economic depression and hardship, the large ensemble allows Joslin to really populate his vision of New York, with bustling city streets and an expansive population for the homeless shanty-town known as Hooverville.

Joslin says that in his depiction of a somewhat bleaker New York he is moving away from the sometimes ‘spinning-bow-tie pantomime’ style of performance that can sometimes find its way into Annie, and is aiming for more of a sense of ‘heightened naturalism’. Joslin’s vision is to highlight the original charm and intent of the character of Annie found in the script, particularly the optimism the character represents, but for such optimism to have meaning it needs to be contrasted with the less-cheerful reality that she inhabits. Joslin wants to make sure that audiences get the Annie they expect, with the characters and numbers that people know and love, but against a somewhat darker backdrop that reflects the reality of the period.

To aid him in bringing his vision to the stage, Joslin is working with Rodney Dobson in the role of Daddy Warbucks. “He offers a very different take on Warbucks in this production” says Joslin. ‘(Dobson) brings the right kind of gruff energy to the role. Starting as a refined man that everyone is afraid of in act one, and the loosening up as he buckles under the weight of Annie’s charm in act two, bringing out the ‘gruff teddy bear’ manner of Dobson through the character of Warbucks.’

When it came to casting the shows iconic villain, Ms. Hannigan, Joslin says that from the beginning he had thought of Amanda Muggleton, who played the role in the Australian professional production alongside Anthony Warlow. “There’s just no one more suited”, says Joslin. 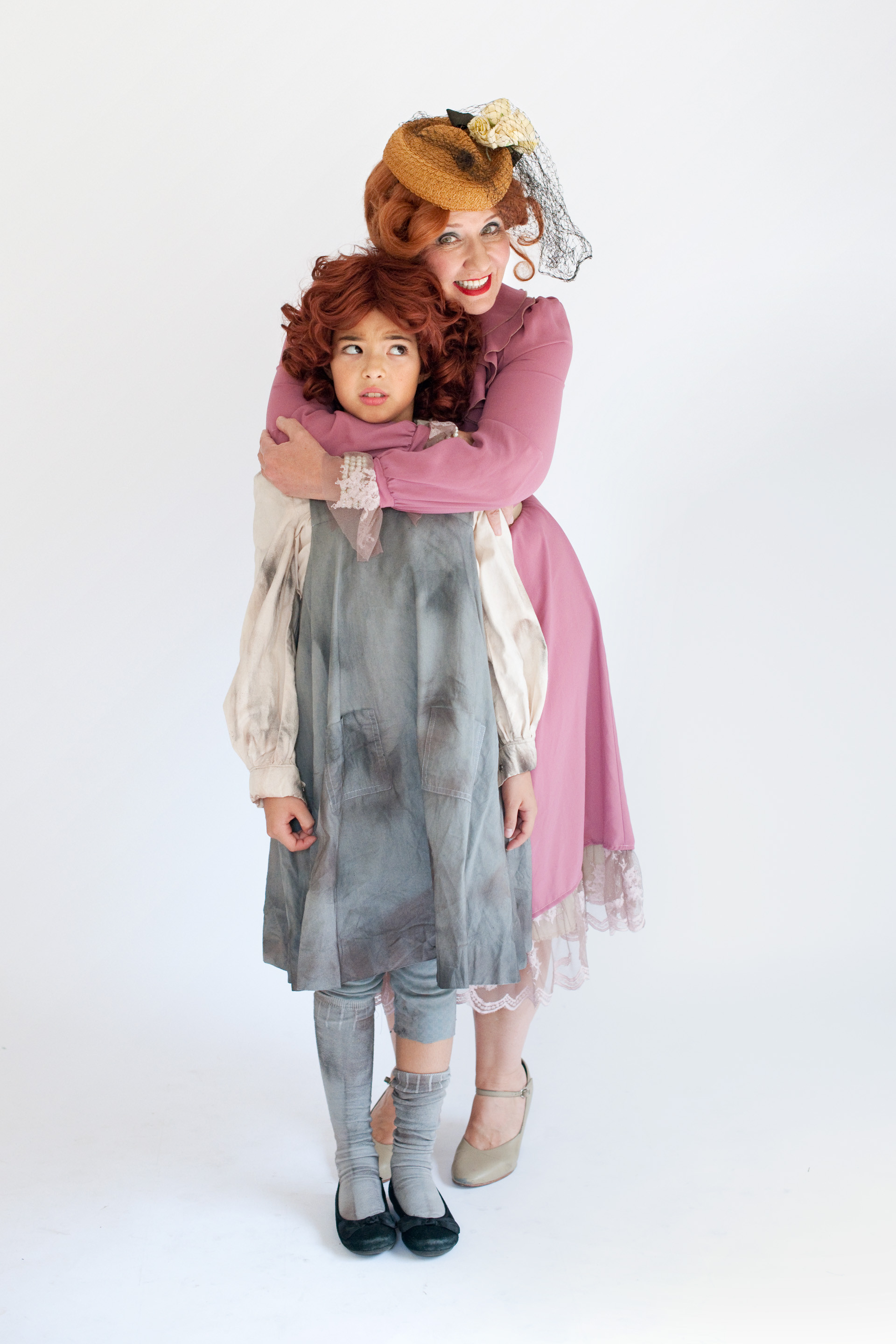 Muggleton herself says she’s having a blast in the production. For her the size of the cast, and the energy and passion of the performers, really bring a new dimension to the production. She reflects on the fact that the professional production had only 10 orphans and an adult ensemble of ‘around 12’, but when she hears 40 strong voices singing in harmony it is ‘chilling’ and she describes the cast of 36 orphans doing ‘hard-knock life’ as ‘mind-blowing’.

For Muggleton, the show itself still holds tremendous power, and she still wells up with tears at some of the songs. ‘It’s a show that touches on so many essential human conflicts’, she says, ‘good versus evil, beauty versus ugly, youth versus age’, and yet it has a happy ending that isn’t cynical or ironic.

Muggleton says that she loves the role of Hannigan because the character is ‘one of the great meaty musical roles’ that offers so much to play with on stage. She’s an ‘old battle-axe’, ‘a two-faced drunk who is nasty to the children, but tries to be sweet to everyone in public, and is foolish enough to think she has a chance with every guy she meets. She’s just ridiculous, and I love her’, says Muggleton.

Of her co-stars, Muggleton is just as enthusiastic. Of Christopher Horsey as Rooster, she says he is ‘wonderful. One of the best tap-dancer in the country’, and she loves the moment that has been worked into the production that lets Horsey show his stuff for a moment. Also receiving high praise is the dog Primrose, as Sandy. ‘Everyone is just astonished at how well trained this dog is!’ she says.

But of the actor in the shows titular role, nine-and-a-half- 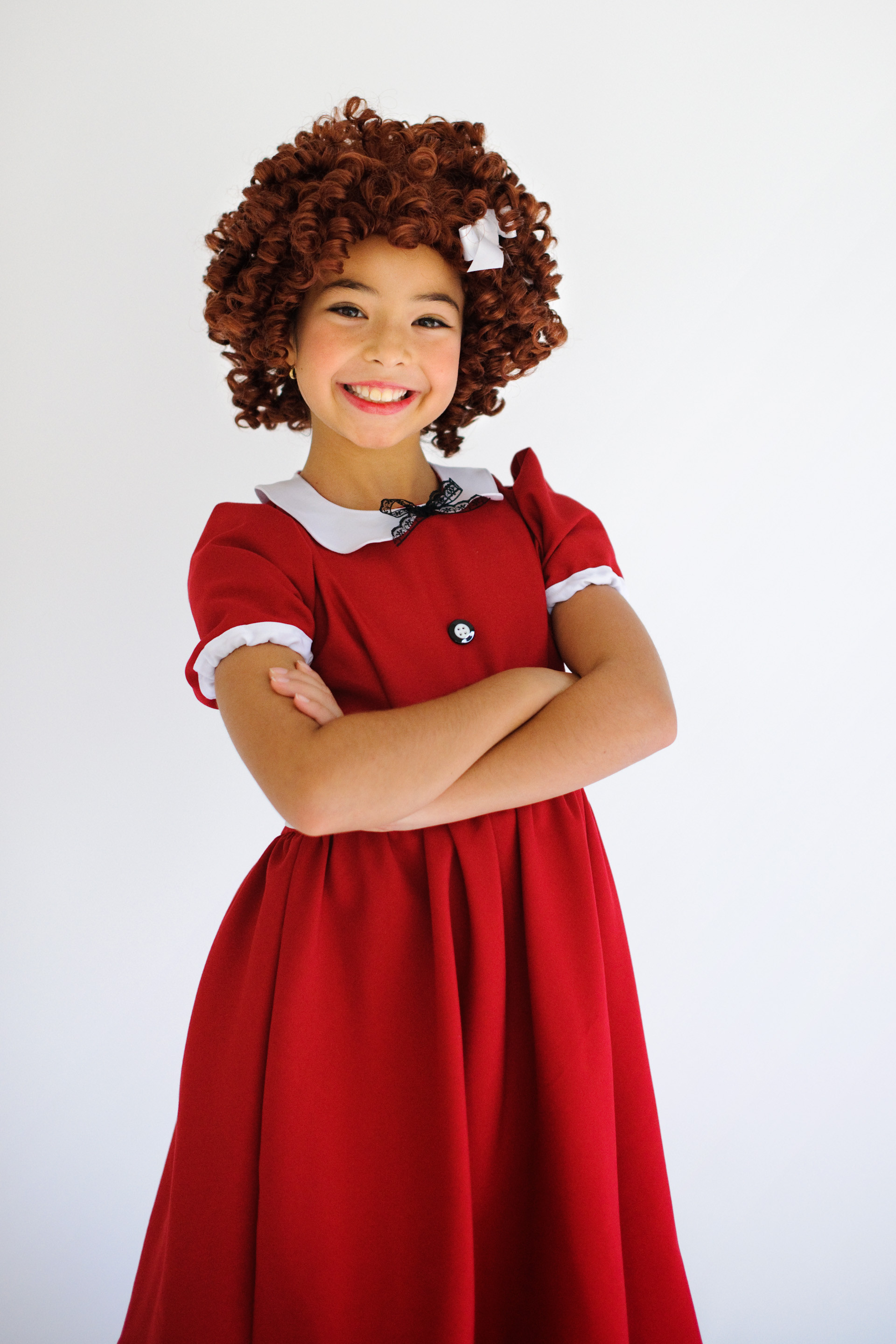 year-old Stella Barahona, both Muggleton and Joslin say they are astounded by her ‘extraordinary’ talent. “Going into the production I was thinking that surely there could only be a handful of possible Annie’s out there”, Joslin says, but was astounded by the number of talented youngsters who fronted. With around 500 young hopefuls fronting for the auditions, Joslin said they had to resort to group auditions over 2 days just to select a core audition group, but young Stella was ‘a stand out from the very beginning’, and despite being younger than average for the large group, quickly shone through.

For Stella, who has been taking singing lessons for just a little over a year, and dancing since as young as two, this is her first time in a musical and she is very excited to be taking to the stage in the role of Annie. Of the character, Stella says she loves the fact that she is ‘always happy, and never sad except when talking about her family’. While’s she’s feeling very nervous for opening night, Stella is very excited, and says how much she likes working with the dog, Primrose. In preparing to perform 12 of the 15 shows as Annie, Stella says her adult co-stars have been very helpful during rehearsals.

Director Joslin says this production will offer audiences the Annie they know and love, but with a focus that offer some unexpected surprises, and with a large cast ready to bring the well-known songs to life on a scale rarely seen in theatre today.

Tickets are now available via the Riverside Theatre Box Office:

All Shook Up – Audition tips!