Oxagen’s Little Women Set to Be a Big Delight!

Louisa May Alcott’s beloved classic novel Little Women has taken on many forms – various film versions, various TV versions, a play, an opera, and of course, the inevitable musical. But what is so great about the musical, says Penn Valk, the director of Oxagen’s upcoming production of the show, is how it combines classical theatre, old and new, to create a unique theatregoing experience that audience will love.

At the centre of Little Women is Jo, a feisty and creative dreamer played by Emily McKenzie. “She’s really passionate, and has a massive drive for life and family.  She really works hard to strive to achieve her goals to be what she wants to be no matter what obstacles she must overcome”, says McKenzie. It’s a vocally challenging role, with a wide vocal range and varying styles, but Emily feels that it’s an honour to perform such an iconic role. Emily grew up, as did many, watching the film adaptations of Little Women with her family. But those unfamiliar with the classic tale shouldn’t be apprehensive about the show – fans and newcomers alike will fall in love with the characters and setting. And it’s certainly not difficult to connect with Jo, a character who readers have fallen in love with throughout the generations since 1869. 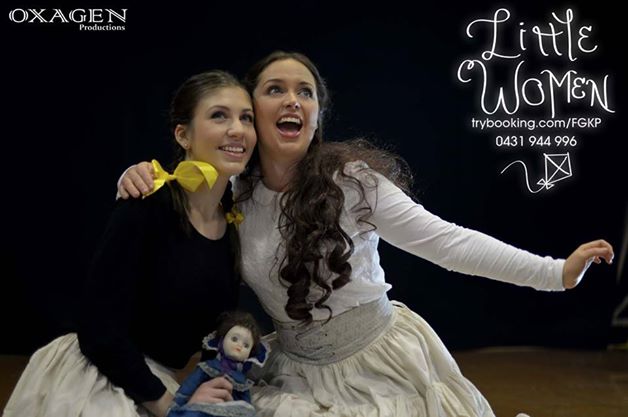 Pictured above: The cast in rehearsal, photo taken from Oxagen's Facebook page (linked below).

The emphasis on historical accuracy in Oxagen’s Little Women is to be admired. So much effort has been put into researching etiquette of the period, how characters sit and stand, and how they interact with each other according to their social hierarchy. All of these details are integral to the actors’ interpretations of their characters. “Because it is set in the 1860s, it is hard to find mannerisms of that time,” says McKenzie. “It’s hard to know how a 16 year old would be played. They had to grow up faster back then,” contributing to the household from a young age.

Such close attention to detail has not been restricted to the mannerisms of each character. The costumes are perhaps the most intricate element of this production. “A lot of time has been spent on costumes, so that they suit the style and personality of each character, and suit the narrative arcs. The costumes are integral to character,” says Valk. The girls have even been rehearsing in hoop skirts since day one, and the boys in braces and the right shoes, to help to create their characters and get a feel for the time period. It is clear the level of dedication and passion of everyone involved.

What Penn wants the audience to come away with after seeing the show is a reignited love of classic literature. She goes on to state that the audience may realise, for the first time, that people in history “had lives as intricate and detailed as our lives today.” But there’s much more to be said for the effect that Little Women can have on an audience. “Little Women is about finding your voice in the world, and learning to survive in the world without losing yourself in the process.” These are definitely universal themes that will never go out of fashion.

Oxagen’s upcoming production of Little Women is a fully realised, historically accurate production, with beautiful moments that will move you. The score, a mix of modern and classical, is a delight; as are the universally recognisable characters and intricate story. Little Women will always have something to say about our world, as it is constantly re-imagined and invigorated by new creative talent. And just wait until the last 45 seconds of the show, says Valk. “This final moment always makes me stop, getting my attention.” But we won’t give anything away!

Oxagen's Little Women opens on the 2nd of October, and tickets can be purchased at this link. You can like the company on Facebook to remain up to date.