Once on this Island

A rich and evocative piece of storytelling, Altitude Theatre’s performance of Once on this Island  brings a 21st century take on the timeless musical, weaving current politics and Australia’s political history together with powerhouse performers in this explosion of sound at La Boite Theatre.

Lynn Ahrens and Stephen Flaherty’s is based on the 1985 novel My Love, My Love; or, The Peasant Girl by Rosa Guy, and is set in the French Antilles in the Caribbean Sea, where dark skinned peasants and the light skinned wealthy co-exist, but their worlds never fully meet or interact. Orphan Ti Moune falls for the wealthy Daniel Beauxhomme after a terrible storm, and a bargain is struck with the Gods…

Altitude Theatre have assembled some of Australia’s best musical theatre voices, while also continuing the new tradition of the show, post 2017 Broadway Revival production, where casting steers away from the racial lines of the roles of the peasants and the wealthy, as well as casting the Gods for their powerful voices and performances rather than the pre-assigned genders in the original script.

This is a modern production created specifically for Australian audiences – the show is opened with a beautiful welcome to country by Garret Lyon, who introduces audiences to the language of the land and his family, and asks the audience to specifically show their thanks to the traditional owners of the land with a specific hand slapping and feet stomping moment, and only continues to integrate First Nations culture, movement, Australian accents and a powerful message across the show – Australia can be interpreted as this very island where people of different backgrounds, classes, skin colours and races co-exist but battle challenges and divides every day. This tone from director and choreographer Bree Langridge, a proud indigenous woman, gets audiences thinking immediately on how the tones of this show, despite being written 30 years ago (by two white people), still ring true – the show is a timeless classic, but feels like there should get to be a point where it’s no longer this as we move our modern society away from the narrative of inequality. The movement Langridge creates around the space, performed in the round, was highly energetic and drew movements and flourishes from all the cultures of the cast while still maintaining a gorgeous cohesive flow.

There are no weak links in this enchanting cast, as with each number the talent, vocal range and energy continued to escalate and raise the stakes, with the cast having a ball and audiences grooving in their seats. A powerhouse cast as the four gods, with Patrice Tipoki as Erzulie, the God of Love, Lyon as Asaka, the God of the Earth, Vidka Makan as Papa Ge, the God of Death and Rhys Velasquez as Agwe, the God of Water. Each god gets their moment to shine and belt the hell out of their vocal moments, with a particular moment of face off between Tipoki and Makan that is an Australian musical theatre fan girl moment I didn’t even know I needed. Tipoki soars in her gentle but emotionally fulfilling number ‘The Human Heart’, Makan is a seductive and terrifying force as the God of Death, Velasquez builds the tension and power of the story in ‘Rain’ and Lyon shines as the warm, sassy and supportive Mother of the Earth (while also wearing the traditional body paint of the Indigenous people and an ‘Always Was Always Will Be’ teeshirt, continuing to acknowledge the history of the land the show was performed upon).

The talent of this cast doesn’t stop there – the ensemble of storytellers and gossips bring constant energy to the vocally challenging score, which uses near constant vocal percussion and backing vocals across the mostly sung through show – it’s 90 minutes of non stop gorgeous harmonies, masterful vocals and moments for every performer to shine in the rich vocal tapestry. Lorinda May Merrypor’s belt is out of this world, portraying the youthful and naive Ti Moune with a sparkle in her eye and a yearning for her purpose, is endearing, warm and relatable, and Asabi Goodman as Mama Euralie and Henry Kafoa as Tonton Julian combine their killer voices with comic timing, warmth and wisdom as Ti Moune’s adoptive parents.

The band of six race through a variety of typical instruments as well as indigenous musical instruments to match the direction of the show, with musical director Kuki Tipoki reaching for the sounds of Hawaii, New Zealand, Phillipines, West Africa, Carribean, Australia and even Mayan Aztec to create the luscious soundscape, with some of the performers leaping in and out of the band space as both musicians and storytellers, as well as drums and percussion of all kind becoming part of the action on stage.

The set is designed as a meeting place – a place for storytelling and gathering of the village or community. Langridge’s vision to expose all of the stagecraft of the show to the audience while also creating a central point in the room and the story to which we have all gathered around to here this story is supported by Madeline Barlow’s set design and Ella Lincoln’s costume design, which combines the tradition of the story, the idea of materials that might be available on this island and the rich cultural background of all of the creatives to create a colourful, bright space that constantly evolves with the storyline.

It’s a pity that the show is held back from it’s full potential due to a few tech issues, missed mic cues and some regular mic or musical instrument feedback, but the cast don’t let it phase them and this should not discourage any audience from seeing the last few performances of this shining jewel of a musical – if you’ve never seen Once on this Island, this is the perfect introduction to this fable like, emotional rollercoaster ensemble driven piece. It’s full of heartbreak, love and growing up, along with powerful themes of politics and class divides interpreted for modern day Australia (and Brisbane), and an abundance of talent.

Once on this Island is on at La Boite until 8 May.

This review is for the performance viewed on Tuesday 4 May 2021. 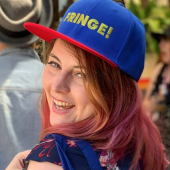 Trash Goes Down The River

Summer of the Seventeenth Doll – Stands the test of time