Not Another Jukebox Musical

I was scrolling through Facebook a few days ago – as I tend to do in the mornings when I have had enough of yelling at the kids to hurry up because breakfast is ready – and I came across a poll on Broadway.com. “Which jukebox musical should be the next to be made into a movie?” My first instinct was NONE. I read through the comments and every second comment was the same as mine. NONE. Okay, so I am not the only one is over the whole Jukebox Musical concept.
This poll was put up because The Jersey Boys movie was about to be released into cinemas. I didn’t get the opportunity to see the Jersey Boys Musical when it was in Melbourne either time, due to a lack of funds, babysitters, time, and the fact that it wasn’t really a priority to sit through two hours of Frankie Valli and The Four Seasons songs. I will however drag my husband to the cinemas for a rare date night to see the movie to see what the fuss is all about, because the kids are now older and can look after themselves and we have some Gold Class vouchers to use. I am pleased to see that Frankie Valli is played by John Lloyd Young who was the original Frankie Valli in the Broadway production. It is great to see some confidence in the movie by using someone who may not be highly well known to the general public but can sing rather than a well known actor who struggles to hold a note, just to get a few more bums on seats. Remember the debacle with Russell Crowe in Les Miserables, Pierce Brosnan in Mamma Mia! (I honestly think he was worse than Russell) or the entire cast of Rock of Ages? Let’s hope Jersey Boys transfers well to the screen.
Furthering on from this I ask the question, what is the fascination with Jukebox musicals?
Looking at the 2014 Tony Awards Best Musical Nominees, After Midnight and Beautiful  both Jukebox Musicals, plus Aladdin (not a Jukebox Musical but already a movie and the songs well known) there was a lack of new, original music. I am glad that A Gentleman’s Guide to Love and Murder won the award in the end just because it’s original. 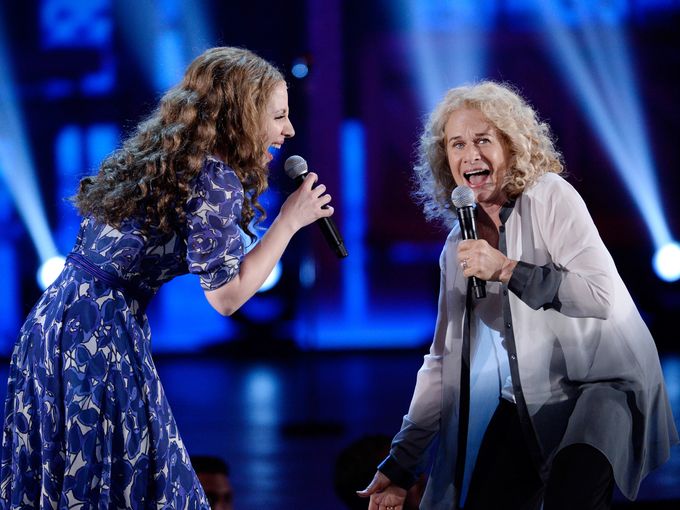 Pictured above: Jessie Mueller and Carole King perform selections from Beautiful: The Carole King Musical at the 2014 Tony Awards.

Just opened on Broadway is Holler If You Hear Me, featuring the music of Tupac Shakur, a rapper who was shot and killed in a drive-by shooting. Really!? This is a very specific music style and I honestly can’t see this having a long run. Add to that, On Your Feet, the story of Gloria Estefan set to open in 2015. It is a never-ending procession of CD collections.
Don’t get me wrong, I am not totally against Jukebox Musicals. I will be the first to admit that Mamma Mia! is a good, fun musical. It was the first musical that my youngest daughter got to go to, so it does hold a special place in our musical theatre experiences. Would I go back again? Probably not for the big bucks that it costs to see a professional production, but if they ever release the amateur rights I’d probably go again because my youngest daughter still loves Mamma Mia! I’m not sure we’d be able to convince the males in the house to come with us though! Side note: imagine the day the rights do get released – every second theatre company will want to put it on.
Looking at the programs that are hanging on the wall in our Music Room and the pile that is sitting of the piano because the wall is full and I haven’t figured out yet what to do with them, the only other Jukebox Musical that we have been to is The Boy From Oz. And yes again I will admit this was a good one. A different style to Mamma Mia! as this is a biographical story rather than a selection of songs put to a story.
You are probably thinking what right do I have to criticise Jukebox Musicals when I’ve only been to two of them and haven’t seen what is arguably one of the better ones in Jersey Boys. I listen to musical soundtracks all the time and when I find a good soundtrack to listen to I know that I want to see it. I have never seen The Book of Mormon, Newsies or Matilda but I know that the moment they open in Australia we’ll be off to see them (the kids maybe not The Book of Mormon, the language is a bit “choice”). I just don’t feel that with Jukebox Musicals. I am a traditionalist when it comes to musicals.
I guess it is less expensive to produce a Jukebox musical. The songs are already written, half the job is done. Plus, if it a biography like Jersey Boys or The Boy from Oz then it’s a matter of compiling some of the facts together to hopefully make a cohesive and interesting story.
I just want a new original soundtrack that I can crank up in the car whilst I’m driving my kids all around Melbourne, from one rehearsal venue to another, one that I can belt out poorly at the top of my lungs. Is that too much to ask?

What do you think of Jukebox Musicals? Let us know your thoughts!

It Sucks To Be You, If You Miss Fab Nobs’ Avenue Q!

My experience of live tweeting