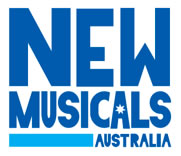 Hayes Theatre Co is proud to announce the relaunch of New Musicals Australia (NMA), an initiative dedicated to the development and production of original music theatre.

NMA assists emerging writers and/or composers to get their work off the ground. Through a series of development programs, scripts and scores will be placed in the hands of professionals and brought to life in front of experts from the musical theatre industry.  Previously New Musicals has developed and presented Truth Beauty and a Picture of You and A Little Touch of Chaos, among others.

The programs are designed to benefit projects at all stages of their evolution, ranging from excerpt presentations to staged readings and rehearsed performances.  New Musicals Australia will aim to provide a network to make connections with high-level industry professionals, creative industry leaders, potential collaborators and fellow creatives.

Submissions are open to all creators of new musicals with Australian citizenship or permanent resident status. Submitted work will be evaluated on; artistic merit of the proposal, including the quality of music and theatrical ideas, potential of the proposal to contribute to the diversity of contemporary music theatre practice in Australia and the potential for further development of both the creators and the piece

New Musicals is an initiative of Independent Music Theatre Australia in partner with Hayes Theatre Co.

OSMaD announce their cast for Normie