Any opportunity a passionate theatre fan has to head to The Great White Way is an opportunity not to be passed up, and presents the challenge of packing as many theatrical activities into a tight schedule as is conceivably possible. My most recent opportunity to do so was in December – I had six days to sample the latest and greatest offerings of the NYC theatre district, and to (hopefully) add some new favourite works to my list.

At least from my perspective, the 2014 Broadway season wasn’t one of the most exciting of recent times. After 2013’s stellar line-up that included Matthew Warchus’ stunningly sophisticated stage adaptation of Matilda, Diane Paulus’ exceptional circus-infused revamp of Schwarz’s Pippin, and Cyndi Lauper’s Broadway debut as composer for the vibrant and hugely entertaining Kinky Boots, the new occupants of the theatres in and around Times Square seemed rather sedate. But of course, things aren’t usually as they seem, and there is plenty going on to make the 16,000-kilometre journey another memorable theatrical feast! Here’s a rundown of the shows that helped me to achieve precisely that on this last trip.

Firstly, as many will recall, the 2014 Tony winner for Best Musical was A Gentleman’s Guide to Love and Murder, a comedic work with music by Steven Lutvak and book by Robert L. Freedman, based on Roy Horniman’s novel Israel Rank: The Autobiography of a Criminal. The story, set in 1907, centres around Monty Navarro (played by Bryce Pinkham), who learns he is a lineal descendent of the prosperous aristocratic D’Ysquith family. Monty conceives of (and ultimately carries out) a plot to kill each of the eight D’Ysquith relatives who stand in the way of his becoming the Earl of Highhurst. There’s no denying Freedman’s and Lutvak’s lyrics are witty and clever, and the show is tightly written. But while it certainly has its musical highlights (the standout moment being the brilliantly-penned and staged, “I’ve Decided to Marry You”, performed at last year’s Tony Awards), the score is not hugely memorable on the whole. Jefferson Mays impresses with his versatility and comic timing, taking on the roles of all eight members of the D’Ysquith family, but it’s Mr Pinkham who gives the standout performance as Navarro. He’s endearing, ridiculous and entertaining right throughout, and in fine voice. Alexander Dodge has done a beautiful job of creating the Edwardian setting, the centrepiece of the production design being a stage within the stage. Linda Cho’s costumes are also spectacular, certainly worthy of their own Tony win. All in all, A Gentleman’s Guide is a highly entertaining expedition to the theatre, but perhaps doesn’t leave the lasting impression that I found lingered after experiencing several other Best Musical-winning works of the past decade.

Above: The original cast of A Gentleman's Guide perform, "I've Decided to Marry You."

A few streets down at the Belasco Theatre, another big winner at the 2014 Tony’s ceremony is playing. It’s the revival of John Cameron Mitchell’s and Stephen Trask’s rock musical about an East German transgender singer and her band. I am, of course, referring to the first Broadway outing of Hedwig and the Angry Inch. Neil Patrick Harris took home the best actor gong for his turn as Hedwig, but left the show in August. On my evening in the Hedwig audience, it’s Michael C. Hall, better known to TV audiences as Dexter Morgan, who steps into Hedwig’s heels. Watching Mr Hall’s performance, it’s difficult to imagine his Tony-winning predecessor being any stronger in the lead role. Mr Hall completely embodied Hedwig right down to the last gesture. He shows fantastic physicality and, vocally, he shows he has the chops to pull off the show’s pop-rock score. And that’s no mean feat… Hedwig rarely leaves the stage during the 90-minute show, which actually feels more cabaret-meets-rock concert than musical. Lena Hall (fresh from a successful run originating the role of Nicola in Kinky Boots) is also extremely impressive as Yitzhak, Hedwig’s husband. Like Mr Hall, she proves herself to be a highly versatile performer and delivers some beautiful vocals throughout. Her characterisation too is totally believable, conveyed for the most part through well-chosen facial expressions and body language. While Hedwig may not offer its audience the most compelling book for a musical currently playing in NYC, the show has been skilfully put together and delivers its audience a thoroughly entertaining night of impressive performances and an instantly catchy, 80s-themed pop rock score. Entertainment Weekly recently named it its top stage show of 2014. And from January 21, co-creator and original star of Hedwig’s 1998 off-Broadway run, John Cameron Mitchell, will succeed Mr Hall in the title role. This should keep audiences packing into the Belasco Theatre for some time to come! Above: Michael C Hall as Hedwig.

The most impactful musical experience I had, from the 2014 crop, came in the form of If/Then, directed by Michael Grief, with music by Tom Kitt and book and lyrics by Brian Yorkey. The team of Grief, Kitt and Yorkey (all of whom had assumed those same roles for the 2010 Pulitzer prize-winning Next to Normal, a personal favourite of mine) made If/Then a show I couldn’t exclude from my itinerary. Add to the credentials of the creative team the star power of Idina Menzel in the leading role, and this was surely going to be money well spent on a theatre ticket. As I queued to enter the theatre, a box-office staff member began walking up and down the line announcing that Ms Menzel was out of the show that evening. Jackie Burns (one of Menzel’s successors as Elphaba in the Broadway production of Wicked) would be on in the lead role of Elizabeth. If/Then tells Elizabeth’s story, as she is newly divorced and relocating to Manhattan for a fresh start. What’s interesting about this work though is that the narrative doesn’t develop in standard linear fashion. Instead, we’re shown two different journeys, side-by-side, that result from the choices Elizabeth makes on each occasion. For instance, we’re shown how differently events transpire as a result of Elizabeth taking (and then missing) a telephone call. The structure of the show has been discussed considerably. Peter Marks of The Washington Post described it as never completely working, while Mark Kennedy of the US’ ABC News commented that If/Then was “maybe not completely finished”. I myself am of the opinion that the structure works, but more importantly, the show succeeds at being a thought-provoking piece – something I couldn’t say about any of the other musicals I’d experienced during this particular week. And though the score may not soar to the dizzying heights of Kitt and Yorkey’s Next to Normal, the show is full of well-written, dynamic tracks. The climax of the show comes in the form of “Always Starting Over”, a power ballad full of gusto at the end of Act II, performed by Elizabeth. While many in the theatre that evening might’ve longed to have heard it belted out by Ms Menzel, I found Ms Burns’ vocals left me wanting for nothing. She sings with a beautiful tone, and there is an effortlessness in the way she reaches for the big notes. Similarly, her acting choices (which feel as though they’re probably actually Menzel’s) are always appropriate. If/Then runs until March 22 and, if you happen to be visiting NYC before that time, I strongly recommend a visit to the Richard Rodgers Theatre to see this work. It’s not the kind of musical Frost or Rigby will be rushing to bring to our shores any time soon, though could work well as part of the subscription seasons of one or our major state theatre companies. Time will tell. 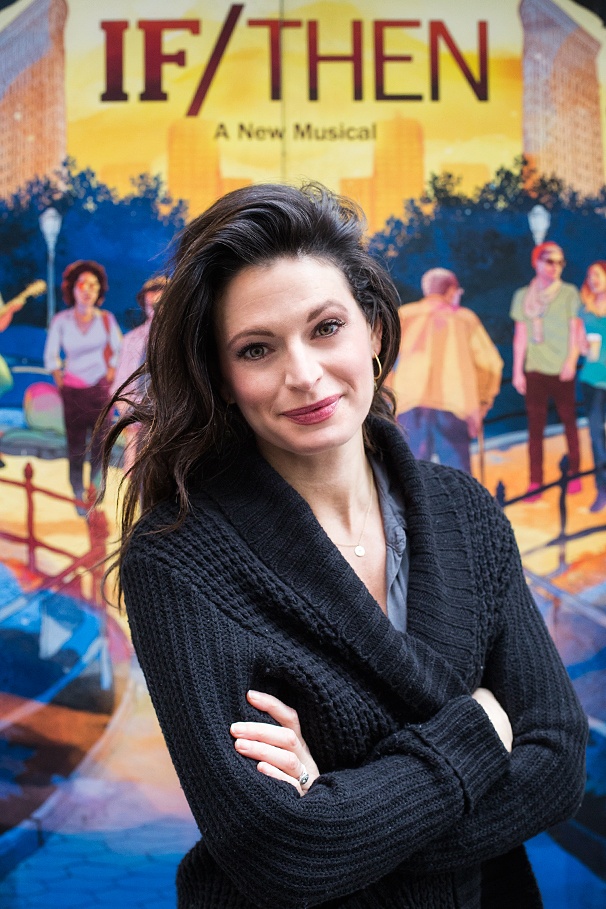 Above: Jackie Burns posing if front of If/Then artwork.

As to plays, I had the good fortune of seeing Ayad Akhtar’s Disgraced, winner of the 2013 Pulitzer Prize for Drama. It tells the story of Amir Kapoor (played by Hari Dhillon), a successful Pakistani-American lawyer, who very openly eschews his Islamic heritage. But during a dinner party hosted by Kapoor and his wife Emily (played by Gretchen Mol), the way Islam continues to help define him as a person becomes apparent. Disgraced is a sharply-written socio-political piece that should find itself a frontrunner at June’s Tony Awards. Mr Dhillon gives an outstanding performance as Kapoor, and How I Met Your Mother’s Josh Radnor shows his range as Isaac, a Jewish art dealer. The run at the Lyceum Theatre finishes on March 1.

Above: The cast of Disgraced on Broadway.

Looking ahead to this year’s Tonys, we’ll see some of the assumed leaders in the Best Musical category open over the next few months – Doctor Zhivago will begin previews on March 27, Finding Neverland has set an opening night of April 8, and Fun Home (which enjoyed a critically-acclaimed run off-Broadway in 2013/14) will officially begin its Broadway engagement on April 19. All in all, nearly 20 shows are scheduled to open on Broadway in 2015. One of the first cabs off the rank, expected to generate some noise this season, was the Sting-penned musical The Last Ship, which opened at the end of October 2014 to mixed reviews. A partly autobiographical piece, it tells the story of the shipbuilding industry in Wallsend, the area of North East England in which Sting grew up. Unfortunately, despite a move to drive ticket sales up by casting Sting himself in the show for a limited engagement, a decision was made to close the show on January 24, following just 29 previews and 105 regular performances. To add my own two cents, I think the show and its team have been short-changed. It would be fair to say that the book is not the most plausible of stories written for the stage in recent times, but Sting’s score is haunting, melodic, atmospheric and highly evocative, and I would go so far as to say that the title track (which serves as a recurrent theme throughout the show) is one of the most memorable cuts from a musical in recent years. Coupled with strong performances from Michael Esper and Rachel Tucker in the leading roles, this should have been a show to find its sea legs (excuse the pun). I had the fortune of seeing the show during the week Sting began in the role of Jackie White, and the impressive performance he gave certainly made me feel privileged to have experienced it. His vocals were as strong as I have ever heard them on any music recording, and his acting enough to deliver the character of Jackie (though, admittedly, this shouldn’t have been a huge challenge, given the show tells the story of his own hometown). What the future holds for The Last Ship is unclear, though I would certainly hope to see an acknowledgment, at least, for its score at the Tonys, and for producers to consider pursuing a West End engagement. Perhaps the story will resonate more strongly with an English audience.

Just as quickly as I get to Broadway, I find myself back on a plane and heading home, Playbills and some new cast recordings in tow. Now it’s time to start planning the next expedition…

Spice Girls on Stage: Notes from a Disgruntled Spice

Want to find out how to do cabaret?