It started on a quiet Sunday afternoon at the Clyde Hotel in Carlton while sitting around the courtyard, sinking a lazy brew with the old time Jazz band bopping away in the background. Corey Reynolds thought, imagine if…

After talking to management at the Clyde (a local haunt, familiar to those near the University of Melbourne and an establishment supportive of the arts) Corey’s ‘imagine if’ became a ‘why not’. And so it was settled, Sunday evenings from seven o’clock at the Clyde would be henceforth known as Keys.

But having the idea and setting it in motion are two very different things. The first step was to organise a pianist. Enter Lucy O’Brien (or for those in the know, Lucizzle O’Brizzle). Currently studying at the VCA and known around musical theatre circles – having performed in shows like Myths and Hymns and been musical director of a host of shows such as Fab Nobs’s A Little Night Music, not to mention the aforementioned musical sing-along evenings at people’s houses – Lucy was perfect for the gig.

Since the first week, Keys has grown and grown as people have spread the word; a key part of Corey’s business plan. As there are no finances behind Keys, they’re relying on people coming, having a great time and telling their friends about it. Along with a developing online presence by way of Facebook though, word is definitely getting out.

Keys is about giving people a chance to try something new, about meeting new people and bringing together different musical theatre circles in an unassuming and friendly way. Over the past couple of Sundays there has been an impromptu performance of ‘There! Right There!’ from Legally Blond, a group of girls drawn together by their love of Spring Awakening who performed ‘Touch Me’ and another duo who have made it their mission to complete Bare by singing one number a night.

Every week is a new surprise and it’s about to get even more exciting with themed nights. Ever wanted to get your JRB on, belt out a showstopper, or finally get the songs that you shouldn’t sing in an audition out of the way? Keys is the place to do it.

In addition, people having been using Keys to introduce their upcoming shows; a cast member of Contact! The Muscial performed ‘Giants in the Sky’ from Into the Woods and the cast of The Musical of Musicals: The Musical are coming down this Sunday to give the audience a taste of their Melbourne International Comedy Festival show.

Corey describes Keys as “Theatre People, but in a pub”; and that’s exactly what it is. Friends and soon-to-be-friends sitting around with a microphone doing what musical theatre people like to do best – perform.

So why not come down and give it a go? Keys is on every Sunday from 7 o’clock at the Clyde Hotel in Carlton. Sing the songs you’ve always wanted to but have never had the chance. I know this writer is looking forward to belting out 'Rose’s Turn' in all its Patti LuPone glory.

Photos thanks to Hal Leonard. 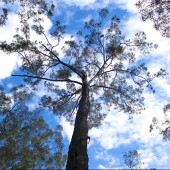 Not Another Jukebox Musical

Disgraced Is A Question Of Identity For Zindzi Okenyo