LIFE’S NOT WORTH A DAMN, TILL YOU CAN SAY, HEY WORLD, I AM WHAT I AM!

Welcome to the fabulous world of La Cage Aux Folles.

The Production Company today announced additional performances in its season of Harvey Fierstein and Jerry Herman masterpiece, La Cage Aux Folles. These additional performances in the Playhouse at Arts Centre Melbourne are on November 21 and 30 and December 2 and 7. Todd McKenney is Albin, the star attraction of La Cage Aux Folles, a nightclub in St Tropez. Georges, played by Simon Burke is his partner. Also starring Rhonda Burchmore as Jacqueline, Marg Downey, Aljin Abella, Emily Milledge and Robert Tripolino.

2014 Helpmann Award winners for best director and best choreographer, Dean Bryant and Andrew Hallsworth team up with musical director, Mathew Frank to create this new staging. Currently in Madrid directing Priscilla Queen of the Desert, Dean Bryant describes his new staging of La Cage Aux Folles for The Production Company: I see this show as utterly contemporary in the themes – there couldn’t be a more timely show about what a family really is in this time of the fight for recognition of gay marriage and families. Though this show is hilarious and brash and camp it’s also truthful and moving. Albin (Todd McKenney) and Georges (Simon Burke) are in a loving, respectful long-term relationship – the kind that we all aspire to. The fact that they’re men (and one a drag queen) is the conflict of the show, but the story itself ultimately says that love and companionship are more valuable than appearances. The moment when Georges’ son, Jean-Michel realises who his mother really is and apologises to Albin is so moving. With this new staging, I’m interested in creating a truthful, natural world that happens to be peopled with highly dramatic people. Georges loves that Albin/Zaza is a drama queen who happens to care for and pamper his husband and son. Georges loves being an urbane man-of-the-world. Everyone in the play chooses to be the way they are, and the mask of “conventional” and “normal” is just as much a costume as any that the Cagelles put on.

Winner of six Tony Awards in its original Broadway season, La Cage Aux Folles is universally known for its anthem "I Am What I Am" and the songs "You On My Arm" and "The Best of Times." 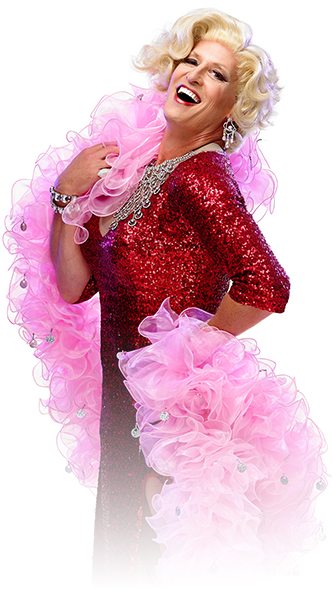 Matinees on Sats 2pm, Suns at 3pm and Weds at 1pm.

Full cast of Matilda is announced!

LIGHTS UP ON THE ARTS [HOME DELIVERY] CAST ANNOUNCED