in association with Hayes Theatre Co 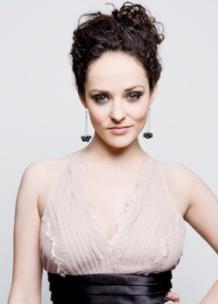 Irving Berlin: Songs In The Key Of Black

A musical love letter to one of the greatest song writers of the 20th Century; Irving Berlin

Neil Gooding Productions presents LUCY MAUNDER in Irving Berlin: Songs In The Key Of Black. This sensual tribute to Irving Berlin, as performed by one of Australia’s leading ladies of musical theatre Lucy Maunder, will play at Hayes Theatre Co from Tuesday 7 April to Sunday 12 April for eight performances only.

After rave reviews garnered from performances in Sydney, Melbourne, Adelaide, and Perth, Lucy Maunder is bringing her acclaimed show to Hayes Theatre Co for the first time.

“I can't wait to bring Songs In The Key Of Black to the Hayes Theatre in April; since the theatre opened in 2014 I've been blown away by everything I've seen there. The standard of work coming out of the company has been extraordinary and I'm very proud to be a part of the 2015 cabaret season with a show that is very close to my heart and that I've loved performing across Australia over the last 3 years. The music of Irving Berlin is timeless, and with the current fascination towards that 30s/40s era I think it's a perfect time for it to be heard and the intimacy of the Hayes will suit the show to a tee,” said Lucy Maunder.

The shadowy alleys and darkest dive saloons of Old New York City are born again by the ultimate lady of the night Lucy Maunder and The Bowery Bandsmen, as they defiantly unplug and reboot the decadence and danger of last century’s greatest song writer. Irving Berlin. Come to a Honky Tonk Palace of broken dreams and melodied memories of Blue Skies, Cheek to Cheek and Putting On The Ritz and many more beloved songs.

Lucy Maunder is one of Australia’s leading ladies of musical theatre. Most recently, she played the role of Rizzo in Grease, earning Helpmann, Glugs and Sydney Theatre Award nominations for her performance in the show’s Australian/Asian tour. Lucy created the role of Lara opposite Anthony Warlow in the world premiere of Doctor Zhivago, receiving Helpmann and Sydney Theatre Award nominations for Best Actress in a Musical. Her other credits include Cinderella in Into the Woods, for which she won the Theatre People Pro Choice Award for Best Supporting Actress in a Musical (Limited Season)  and Janet in The Rocky Horror Show.

Lucy’s one-woman show Irving Berlin: Songs in the Key of Black toured Australia to critical acclaim in venues such as Adelaide Cabaret Festival and The Famous Spiegeltent in Melboune, amongst others. She has since released her debut album of the same name featuring songs from the show. Lucy was the recipient of the ASCAP/TDP Bound for Broadway scholarship and subsequently performed in the cabaret Give Me Gold at Don’t Tell Mama in New York.

"Maunder sings most attractively with a velvety lower register and works gracefully. A model of sensual intelligence and her singing is very fine." – The Sydney Morning Herald

Irving Berlin: Songs in the Key of Black

with Isaac Hayward on Piano

Win Tickets to Storm In A D Cup

Debra Byrne to lead cast of The Music of the Night