Do you see the people spin? Not any more, in this epic restaging of the world’s favourite musical. Without the famous turntable, the student uprising is now the only “revolution.” 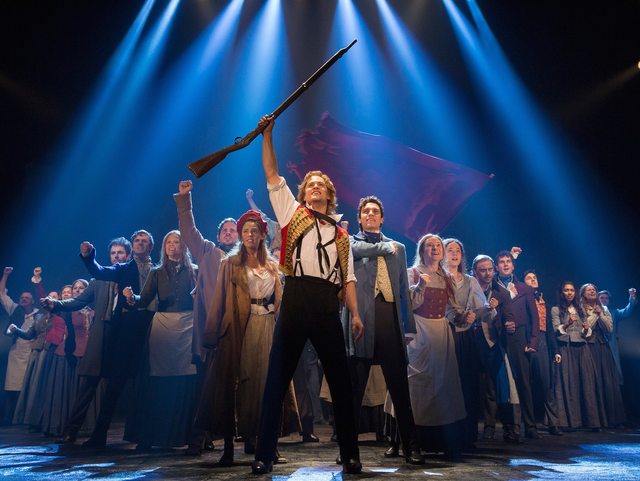 The brilliance of this new presentation is that it combines the musical we know and love with cutting edge stagecraft and technology, resulting in the production that Les Misérables would have had if it had been first staged this year. Rich orchestrations replace the tinny 1980s synthesizer sound, inventive projections complement time and place, costumes are freshened with muted splashes of colour, and, best of all, the show finally has scenery – and it is scenery on a massive scale. The grand scope of this production means that the visuals now match the blockbuster status of the show itself.

Purists need not fret at this description of Matt Kinley’s set and image designs or Christine Rowland’s additions to Andreane Neofitou’s costumes. The show may have been brought well into the twenty-first century, but it is far from Disney-fied. Top-form ingenuity and skill have crafted updates that feel completely natural and logical. It is just like the experience that opera lovers have felt for decades when watching a brilliant new revival of a much loved work. Although, in the brandy-soaked words of Grantaire, “It’s better than an opera.” 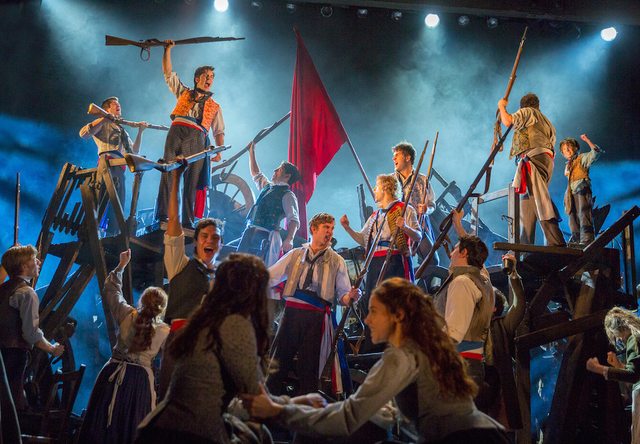 The single-set simplicity of the original staging relied on a few props and the audience’s imagination. Kinley uses various combinations of large set pieces to create full settings for locations such as Fantine’s factory, Valjean’s stately home, the Thénardiers’ inn, the streets of Paris and the student café. Projections add texture and depth to each scene, and include some thrilling effects such as the convict ship opening, the sewer journey and Javert’s death*.

Paule Constable displays painterly skills in her lighting design, bathing the stage with streams of haze-assisted light. The overall effect is still one of shadows and gloom, but the eye is drawn effectively to all sources of action, and the inky blackness upstage allows for easy transitions in the absence of the revolve. Mick Potter’s excellent sound design has the audience practically ducking for cover as bullets ricochet around the auditorium during the battles.

Musical staging by Michael Ashcroft and Geoffrey Garratt makes the action at Marius and Cosette’s elegant wedding celebration clearer than ever. One quibble with the choreography musical staging: just like the cakewalk of “Hello, Dolly!” and the coin-top dance of “We’re in the Money,” the triangular forward/back march of “One Day More” is so iconic that it really should never have been changed. 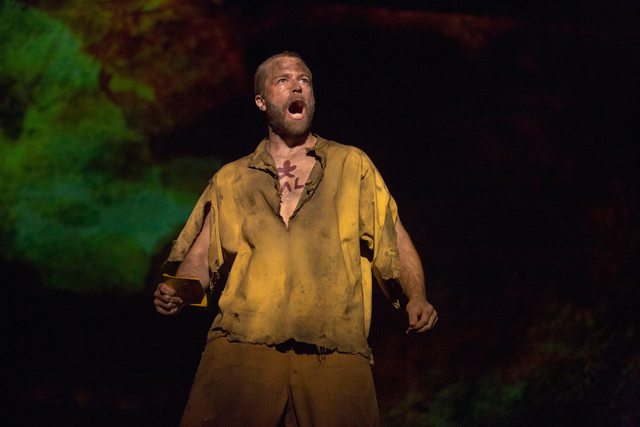 Astounding as the lavish production elements may be, the heart and soul of this return season is the heaven-sent performance of Simon Gleeson as Jean Valjean. A consummate actor and exquisite singer, Gleeson reveals multiple nuances in Valjean’s torturous journey of reform and redemption. Prompting tears as early as the Prologue, Gleeson is heartbreaking as Valjean shudders with shame and remorse at the Bishop’s kindness. Valjean’s heartfelt prayer “Bring Him Home” displays the full scope of Gleeson’s acting and vocal range. A decade after Gleeson’s breakout role was to come in ill-fated Australian musical Eureka, he is back at the Maj to live out the old adage “It’s only taken ten years to be an overnight success.” 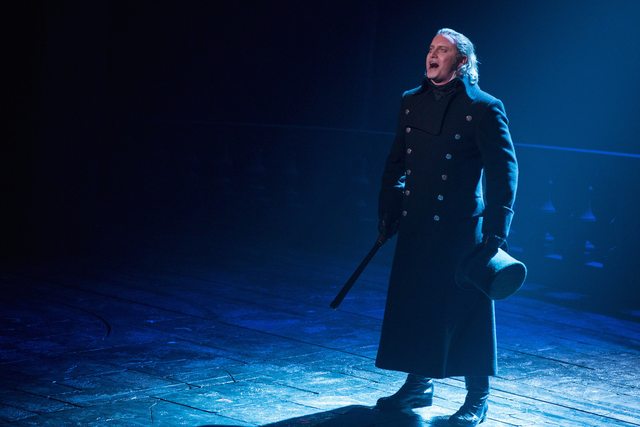 Hayden Tee strikes a commanding presence as Valjean’s lifelong adversary Javert. Impressing immensely with his powerful bass baritone, Tee captures the demonic drive of Javert, underpinning this fire with the frustrated humanity of a man who believes he is right and just. 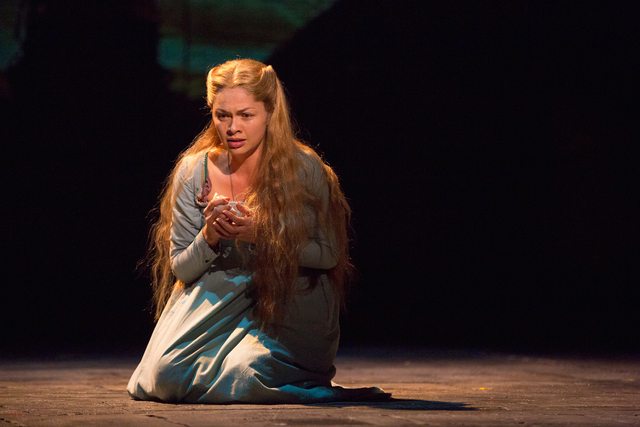 Patrice Tipoki makes a haunting impression as dear Fantine, her intrinsic musicality delivering a lovely interpretation of “I Dreamed A Dream.” Beginning with a nicely underplayed portrayal of Fantine’s quiet dignity, Tipoki adapts her full range of vocal and facial expression as Fantine dissolves into dark despair. 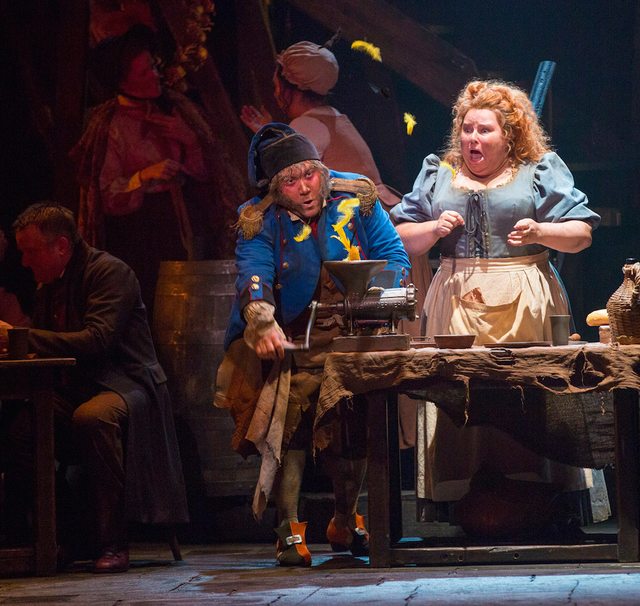 The comic shenanigans of the Thénardiers are in capable hands with Trevor Ashley and Lara Mulcahy scoring plenty of welcome laughs. Ashley plays Thénardier with the gleeful menace of a playground bully, and Mulcahy offsets Madame Thenardier’s covetous greed with a merry twinkle. The pair has strong rapport in playing the devilishly dysfunctional couple, and both handle their vocals with lashings of flair and character. 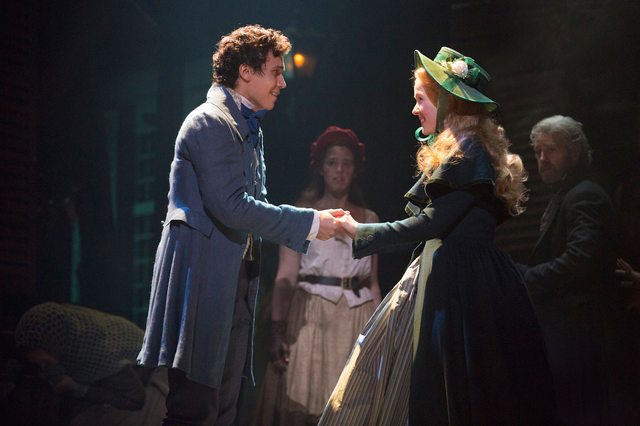 A trio of relative newcomers brings authentic youthful passion to the lopsided love triangle of Marius, Cosette and Éponine. Euan Doidge is a dreamily romantic Marius, his breathless passion contrasting well with the serious intentions of the other students. Doidge sings with tender sweetness, conveying Marius’ ardour and impetuousness with engaging intensity before progressing on to a more somber, humble tone after Marius has seen the ravages of battle. Kerrie Anne Greenland brings a compelling fierceness to Éponine, her eyes practically blazing with love for Marius. A solid belter, Greenland soars through classic power ballad “On My Own.” Emily Langridge is an angelic Cosette, her sweetness giving Marius every reason to fall in love. On the few occasions it is heard, Langridge’s pure soprano has a lovely tone. Strong as each of these three performers are, they will undoubtedly make even more advances as the season progresses.

His appearance transformed, most attractively, by a blonde wig, Chris Durling is a heroic figure as student leader Enjolras. Although in fine voice, Durling lacks a little of the gravitas required for the commanding role. Still, the youth of performers like Durling, Doidge and others adds weight to the female chorus’ lament: “No one ever told them that a summer day can kill.”

While each ensemble member expertly plays a mind-boggling number of characters, special mention goes to Luke Joslin, who brings a distinctly mature and highly accomplished presence to each of his roles.

With a Melbourne season of only six months, it seems inconceivable that Les Misérables will not sell out its entire run. Storm the barricades for a ticket.

Lady In The Van

You Should Be Dancing – Everybody NOW!