2008 Tony Award winning Best Musical, In The Heights, isn’t a natural fit for staging on Australia’s independent theatre stages. Casting a show about Latin-American immigrants living in New York’s Washington Heights doesn’t feel like an easy prospect and perhaps seems to be a bit niche for broad appeal. But continuing form from last year, and thanks in this instance to producers StageArt, Chapel Off Chapel is becoming the venue of note for hosting hitherto unseen musicals and Broadway obscurities.

Set over three days in the hottest part of summer, In The Heights centres around Usnavi, the operator of a bodega (convenience store) and the residents and shop owners in the nearby barrio. There’s Daniela’s hair salon which is about to close down and where Usnavi’s love interest Vanessa works; there’s Rosario’s Taxi Service, a struggling family business run by Kevin and Camila whose daughter Nina has just returned home from Stanford University; there’s Benny, a young employee of the Rosarios and the only non-Hispanic person in the neighbourhood; there’s a Piragua guy – that’s someone who sells shaved ice out of a cart; and then there’s Abuela Claudia, the matriarch of the neighbourhood and woman who took in Usnavi when his parents died at a young age.

Through a mixture of rap, hip-hop and salsa music, all the characters dream of a better life and in various ways strive to achieve them throughout the story. It’s a story familiar to Australia’s immigrant community but not necessarily one with the same cultural references. Nevertheless, director James Cutler has expertly cast his production with an ensemble of performers who convincingly capture the feeling of the barrio and portray the Latino characters with surprising authenticity. 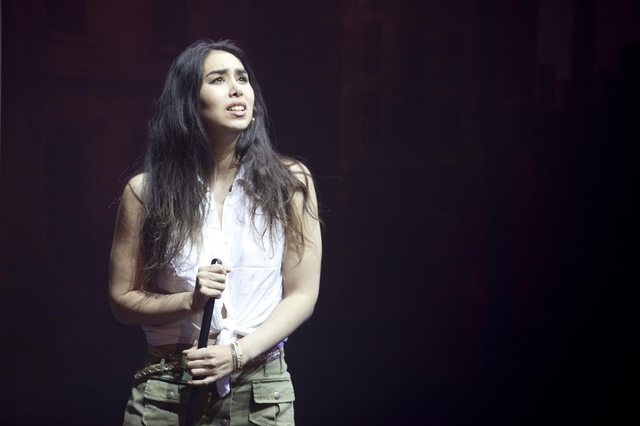 Making the production feel particularly genuine is Stephen Lopez as Usnavi. As the narrator of the story Lopez carries the show with great confidence, warmth and most pleasingly, clarity. Defining all the lyrics clearly in rap that has difficult rhythms and curly language isn’t an easy task when the words aren’t yours but Lopez makes it sound completely natural. He also has great rapport with Andrew Doyle as Sonny, Usnavi’s young cousin and employee at his store. Doyle has all the requisite cheek and sass, combined with familial respect that sees Sonny set Usnavi up on a date with Vanessa.

Bianca Baykara plays Vanessa as a hard-to-get ice queen who has all the men landing at her feet. Baykara demonstrates a fine singing voice and cuts up the floor when she salsas with all the men in the club, but it’s hard to understand why any man would continue to pursue her with the way she gives them the cold shoulder. There’s a lack of confidence in this performance that detracts somewhat from the feeling that Vanessa is a real person and not a caricature.

Confidence is something that James Elmer, as Benny the Rosario’s employee and their daughter’s love interest, does not lack. This boy oozes charm and lovable enthusiasm as Benny, even when he finds out that he no longer has a job when the business gets sold. Elmer also has an outstanding singing voice with a sweet vocal tone that perfectly complements Anna Francesca Armenia’s voice in Benny and Nina’s duets. Armenia’s voice is likewise a joy to listen to and she brings a lovely gentleness and honesty to her role, especially as the girl struggles to tell her parents that she has lost her scholarship and dropped out of school.

Francesca Arena is too young to be playing Abuela Claudia and her lined makeup looks a little ‘Cats’ like from the first few rows, but that doesn’t stop her from giving a truthful presentation and outstanding vocal performance. Laura Marcucci is fabulously feisty as Daniela and struts her way around the stage with perfect Latina style. Gareth Jacobs is a standout in albeit a pointless role of the Piragua Guy, delivering glorious high notes and an effervescent performance. 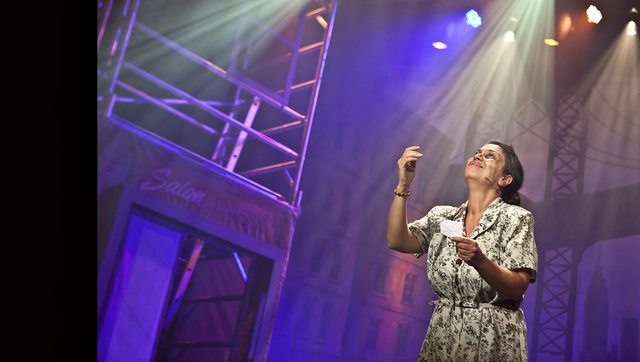 Unfortunately, a pointless role isn’t the only issue with the script. On the whole it’s just full of clichés and under developed plot points. The show seems to rely entirely on its audience recognising themselves on stage. A reasonable remit, but it doesn’t overwrite the fact that the script feels quite undergraduate in style. It somewhat surprising that the show won the Tony for Best Musical, but when you consider the shows it was up against that year (Cry Baby, Passing Strange and Xanadu) you come to understand that it wasn’t playing on a very competitive field.

With that said, what is magnificent about this production, is the choreography and dance performance. Yvette Lee has managed to design routines that are truly spectacular within a tiny stage space. The cast all seem to have supernatural spatial awareness as they weave in and out of one another performing sharp salsa routines, body popping hip-hop and extraordinary breakdances – with particular note of Peter Sette’s flares and head spins. Musical Director Cameron Thomas handles the tricky latin tempos with flair, allowing the dancers to make the most of the fiery beats. 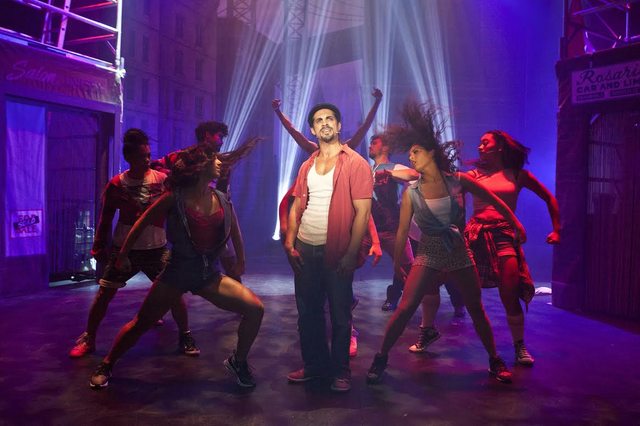 Merinda Backway’s set design ingeniously covers scaffolding with well-painted flats creating a look very faithful to the original production. Jason Bovaird’s lighting design is excellent, playing with colour to create the feeling of fireworks and effectively presenting a blackout without leaving the audience in the dark.

As a Best Musical, In The Heights struggles to compare with many of its fellow Tony winners, but what can be said about it is that it’s extremely charming and it bears a unique sound that makes for explosive choreography and a pretty enjoyable night out.

The Rise and Fall of Saint George