Hooking Up with Hedger and Nicholson

Following the obvious success of the Hedger & Nicholson created initiative Home Grown, it is now time for one of the writing pairs’ original musicals to be showcased. Nick Hedger and Ben Nicholson, both recent graduates of the Western Australian Academy of the Performing Arts, have previously written two musicals together, and now embark on presenting their third – Hook Up – to the Melbourne public.

Although previous incarnations of this show have been touted as cabarets (Hook Up was the winner of the Short + Sweet Cabaret Festival Fringe Development Award in 2013), Hedger & Nicholson were clear in stating that this workshop will not fit within those constraints. “This presentation of Hook Up is not a cabaret. This show depends on both song and dialogue scenes to move the plot along, but it will be presented with minimal staging.” Originally beginning it’s life as a ten minute cabaret, Hook Up surprised it’s authors by developing into a one hour musical. Rather than being “a collection of commentaries bound by a similar theme” (as one would see in a song cycle or cabaret) Hedger & Nicholson “have decided to call this run a mini musical… We've found that cabaret's sell brilliantly in Australia, but new musicals don't. We'd like to bridge the gap."

Hedger & Nicholson hope that much like Home Grown, their show finds an audience within the supportive Melbourne theatre atmosphere. The following quote, taken from Hook Up’s Crowd Funding site, sums up Hedger & Nicholson’s feelings toward the industry perfectly. “As young artists, we are still forming our perspective and consequently have lots of unique and valuable stories to add to the growing collection of original Australian works. Whilst our youth and greenness are the birthplace of our passion, they are also our greatest obstacles in an industry that is reluctant to take risks on newcomers.” Hook Up, then, is a perfect example of the youthfulness the young men hope to inject into the Australian theatre industry. Not only is the show written by youth about the experiences of youth, it will also feature a small cast of five graduates from WAAPA and the (then called) Ballarat Academy of Performing Arts. “We love making theatre, it’s our passion. We believe in making theatre that entertains and inspires, as well as writing pieces that 'hold up the mirror to life’, thus allowing audiences to see universal issues from other perspectives than their own and consequently (allowing them to) grow as people through shared empathy with a character and story.” 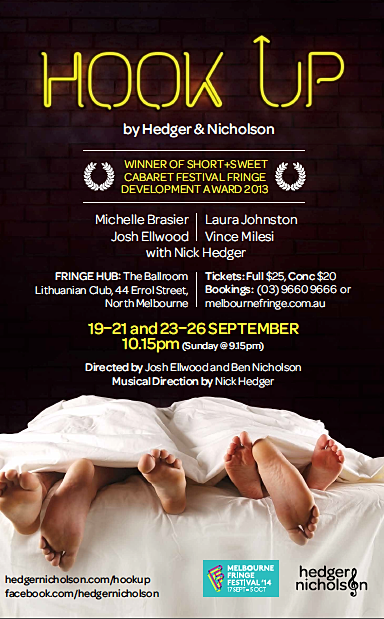 Above: the promotional image for Hook Up.

When asked about the inspiration for their writing style, Hedger & Nicholson were quick to credit American artist, Ryan Scott Oliver. “We really love his writing style, and the way he and other new musical theatre writers present their work.” Having watched Hedger and Nicholson perform one of their songs at a Master Class only last week (and after an extensive YouTube session), it is very clear just how much inspiration for their music has come from talented New York writers and the music presented in places like Joe’s Pub and 54 Below. Much like notable modern theatre writing duo Pasek & Paul, both men not only write but also perform their material. Both perform with passion and a youthful buoyancy, able to understand and communicate the ideas their music and lyrics outline, and seem to understand that if they want their voices heard, they must work hard and create their own opportunities (hence, Home Grown.)

The following is the official description of Hook Up from Hedger & Nicholson’s website:

"Gen Y has long been known for its fast-paced, frenetic approach to life. So why are so many of us suddenly settling down? Relationships are confusing things. They can be funny, tragic and just plain bizarre, especially when you are on the outside looking in.  But now Gen Y has reached the age where fleeting hook ups and endless partying don’t cut it anymore. So, what comes next?”

Justin Stephens And His Woman In Black

Les Misérables and Beyond – The Spotlight on Kerrie Anne Greenland

Miss Manners, or Miss-Mannered? The (Not So Fine) Art of Theatre Etiquette

The Paint is Dry at Love Never Dies – Melbourne