The smiles and trials of children’s television… 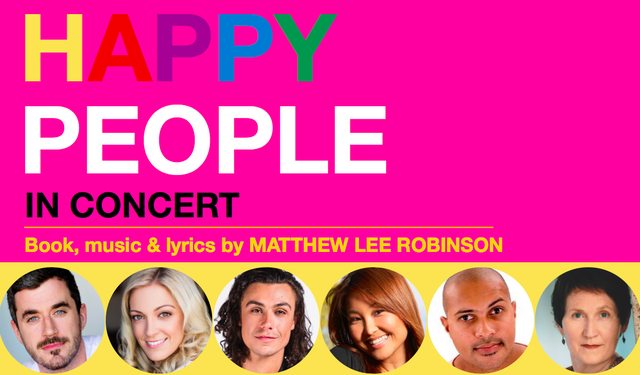 HAPPY PEOPLE reveals the onstage/offstage life of America's most popular children's television performing group as they descend into chaos during their tenth anniversary year.

Matthew Lee Robinson (please note the new use of his middle name due to professional reasons) says “I was inspired after a catching an episode of Hi-5 in the mid-2000’s to write HAPPY PEOPLE. I was amazed at the relentless bubble and fizz of Charli Delaney in particular and desperate to know what the backstage life of a children’s entertainer might be, what they must have to suppress to get on with the job. The whole show has a smile, a wink and a stab in the back.”

America’s HAPPY PEOPLE are four face actors (Sally, Sunny, Benny and Bobby) and the internationally famed suit character Edison The Elephant. They’re all too old to still be at this game, underscored by a marital break-up between two members, one desperate to become a breakaway pop star, one addicted to illicit substances and one on the verge of nervous breakdown.

Originally a commission from the State Theatre Company of South Australia, the first workshop of HAPPY PEOPLE took place in late 2010 at the Melbourne Theatre Company studios. Matthew Lee Robinson then received a Churchill Fellowship to study composition, lyric and book writing under the mentorship of Stephen Schwartz through two New York City readings of HAPPY PEOPLE. These readings were hosted by producer Greg Schaffert (producer of Broadway’s Peter and the Starcatcher) at Playwrights Horizons (known for the original productions of Sunday in the Park with George and Grey Gardens). The readings featured cast members from the Broadway productions of Wicked, Memphis and Jersey Boys. During this time, Matthew was signed to one of America’s top five talent agencies, Paradigm.

In September 2013, HAPPY PEOPLE became the first musical entirely written by one Australian to ever be developed professionally in the United States. Village Theatre, best known as co-developers of Broadway’s Next To Normal and Million Dollar Quartet, advanced the piece and presented a public reading in their studios.

As a result of the workshops in New York City and at Village Theatre, Washington State, Australia will now get an opportunity to publicly hear Robinson’s new work developed with dramaturgical input from WICKED composer/lyricist Stephen Schwartz.