With music by Jerome Kern and book and lyrics by Oscar Hammerstein II, Show Boat was a ground-breaking work when it first opened in 1927 and marked a turning point in the development of the Broadway musical. It was the first musical where the music was written specifically for the purpose of the show. Prior to Show Boat, musicals featured previously written material that was simply added to a story. Show Boat is not simply a classic old musical – it is a significant and important part of musical theatre history.

Show Boat follows the lives of the actors, stagehands and dock workers on the Cotton Blossom, a Mississippi river show boat. Show Boat is famous for its soaring melodies and classic songs: the exquisite "Make Believe," "Bill," "Life Upon the Wicked Stage," "Can’t Help Lovin’ Dat Man" and the wonderfully haunting "Ol’ Man River." The story traces the lives of a family of show boat performers over several decades, focusing particularly on the story of Magnolia  (Alinta Chidzey), the daughter of the show boat captain and her love for the gambler Gaylord Ravenal (Gareth Keegan) and the tragic decline in the fortunes of the beautiful Julie (Christina O’Neil). It delivers some very funny old school style of comedy, but also deals with some darker themes of racial prejudice and tragic love.

Talking to leading man, Gareth Keegan, it is clear the cast have a huge respect for this iconic show. Keegan describes Show Boat as being like a bottle of good wine and encourages younger audiences not to be afraid of its age because there is a lot of richness in it compared to some musicals these days.

Keegan will already be well known to the regular audience members of The Production Company, having played the role of Frederic in last year's production of The Pirates of Penzance. Earlier this year, Keegan starred as Mickey in the Manilla Street Production of Blood Brothers. Both shows demanded a very physical and energetic performance from Keegan who proved not only his tremendous vocal range, but also his athleticism and physical prowess. This latest role in Show Boat as Gaylord Ravenal requires a different skill set. Less physical, Keegan says this role demands just as much effort, but in a different way – it's more of an inner strength. Due to the more classical style of the music, Keegan describes singing these songs as similar to having the vocal chords massaged. He says you feel good after singing these songs – and not tired in the way you would feel after singing rock songs. Keegan explains that in order to sing these songs well it is important to remain relaxed, which reduces tension and releases the feel-good hormones endorphins, making rehearsals a very positive and enjoyable experience.

Keegan describes his character of Gaylord Ravenal as a wayfarer. Gaylord is a riverboat gambler who lands an opportunity to work on a show boat. He falls in love with the beautiful Magnolia (Alinta Chidzey) and marries her, but some things in life don't go quite as well as planned and Gaylord doesn't always make the right choices even when trying to do the best for his family. Keegan says often this character has been played as somewhat of a villain, but this is not how he sees him and believes the audience will have a soft spot for Gaylord as they realise he is trying to do the right thing. Keegan describes Gaylord as being very charming and likeable … and Keegan even gets to grow a moustache. Yes, this charming look is authentic – Keegan didn't want to be bothered with a fake moustache so he grew the real deal. 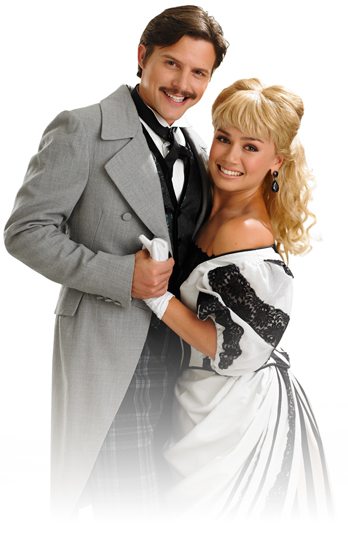 Keegan is joined by a fabulous cast including Eddie Muliaumaseali'i who plays the role of Joe and has the task of singing the iconic song, "Ol' Man River." Keegan says the audience will be enraptured when they hear this song performed, describing Muliaumaseali'i has having in-built speaker amplification within his body – saying he just seems to resonate as he sings!

Over the decades since Show Boat first opened, there have been many different variations of the script. This latest production will see a tapered back version to create a whole new production that has never been seen before. It is quick and pacey, allowing the strength of the story to be delivered through the power and emotion of the songs.

Keegan comments you just don't see musicals like this anymore. He acknowledges people may consider Show Boat to be somewhat “old school” but says once you hear the music properly, you realise just how powerful it really is. The music just flows to tell the emotion better than other modern musicals where sometimes the on-stage activity and the music can sometimes feel somewhat disjointed.

As the cast prepare to move into the theatre for their final week of rehearsals, Keegan is excited about the staging and set design. However, it is the costuming that is likely to really impress. Show Boat spans several decades and across a period of time that saw a revolution in fashion, so over 100 costumes will be ready for Show Boat, making this the biggest costuming of any of The Production Company shows.

Keegan encourages all musical theatre lovers to see this brand new production of musical theatre history, step back in time and experience the glorious music of Show Boat. He challenges younger audience members to come along and be prepared to open up parts of themselves for the first time that are not touched by modern music. Fans of musical theatre who are yet to see this Show Boat can add it to their list of live shows seen. Keegan adds that working actors should simply come and pay respect to this show and be grateful for the ground-breaking history that is Show Boat.

The Production Company’s season runs from August 16 to 24 for ten performances only in the State Theatre at Arts Centre Melbourne.

Bookings can be made at www.artscentremelbourne.com.au  or www.ticketmaster.com.au