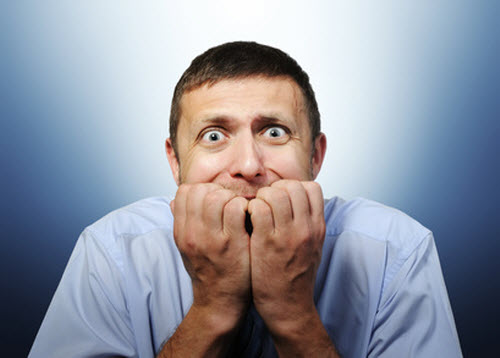 Above: Does this slightly dodgy stock photo look like you on the first day of rehearsal? It turns out you are not alone!

So you’ve survived through the auditions, maybe even callbacks, and landed a place in the show. The hardest part is over. So, then, why is it so hard to settle those pesky, jittery nerves before the show’s first rehearsal? Read on for a look into why we might feel uneasy before a first rehearsal, and how we can overcome uncertainty in the face of the unknown.

It’s the day of the first rehearsal. You wake up extra early to get ready, and you have a slightly sinking feeling in that pit of your stomach specifically reserved for crippling self-doubt. It reminds you of the morning of the audition, but is a little less soul-destroyingly intense. But it is still there. You try to organize yourself as much as possible as an act of desperate self-assurance, trying to stay one step ahead of your nerves; this pathetic attempt makes a miniscule difference, if at all. You read through the little information you’ve been given for the two thousandth time to mentally prepare, but nothing can prepare you for the social onslaught and musical overstimulation to come.
The truth is that, when faced with the disturbing truth that you must go into an often unfamiliar environment, meet 50 new people (and thus, of course, make 50 good first impressions – oh the pressure!), and participate in a number of unknown initiation activities, it can definitely be intimidating. The socially anxious among us have the added disadvantage of possessing a heightened self-deprecating self-awareness that can be distressing in any social scenario. Amid the sporadic excitement of starting on a project you may have been looking forward to and preparing for for months, everyone can get a bit (or a lot) nervous about meeting a new cast and finally getting started.

Many of these fears originate from a fear of judgment from others. It’s like the first day of school all over again. Is everyone going to be judging each other? Will you be left out of cast bonding activities? Will you get lost in the sea of a huge cast? Does everyone already know everyone else, except for you? These statements will probably ring true to those readers who suffer from first rehearsal jitters; often all of these nerve-fuelled statements and more can occur in one split second. However, chances are that the answer to all of the above is no, because, though it is sometimes hard to comprehend in the moment, everyone is in the same boat as everyone else. We all need to remember: you’re in the show for a reason. The hardest part is over – you are no longer being judged by those around you – this is the time, more than any other, to have fun! The most challenging thing you face on the day of a first rehearsal is showing up and engaging.

Speaking to some of my fellow cast-mates recently, I heard a variety of first-rehearsal experiences and worries, and received some interesting pointers to combat them. There was some worry about hitting the right notes – to remedy this, the solution offered was just to mime the words until the nerves wore off. Other worries regarded anxieties around personal appearance – to combat these woes, one experienced performer said that they dress up, pushing the advice to dress to impress in order to boost self-confidence. Possibly great, practical advice for some, but they mask a deeper insecurity. However, there’s nothing wrong with dealing with a fear of inadequacy in any way you can; if you need to fake it ‘til you make it, then by all means, do just that. Everyone does this in their day-to-day lives to varying extents.

There are always going to be new things in life. Sometimes it can be hard to keep sight of the fact that you have to step outside of your comfort zone and do things before you’re completely ready in order to get somewhere better. If anything, these extreme feelings are proof that you take what you are doing seriously. Good for you! Let it show in your work. Be open to new people, and experiences, and wear a smile. Those who don’t get nervous are lucky, and all of us jittery folk can learn something from them; have faith in your own abilities as a musician, as a performer, and as a person. Take it easy in that first rehearsal, and most importantly, take it easy on yourself. You really can do it.

Pop as you have never heard it before