Extra performance of Atlantis added due to overwhelming demand

As a young child, Matthew Robinson wanted to be an archaeologist. But by the time he had reached his final year of high school, Robinson says he had outgrown Indiana Jones and was looking at a career in either genetic engineering or performing arts. Thankfully, he chose the latter and successfully completed a degree at the Western Australian Academy of Performing Arts (WAAPA.) Although starting out predominantly as a performer, Robinson has established himself as an award-winning composer/lyricist. He is the youngest ever recipient of Australia’s richest theatre-writing award, the Pratt Prize for Music Theatre (winning with Metro Street.) Robinson's next musical, Happy People, was developed with mentorship from multi Grammy and Oscar-winning composer/lyricist Stephen Schwartz. Robinson's association with Schwartz was the result of being cast in the title role of Kookaburra's production of Pippin, an email he sent to Schwartz and then a subsequent meeting in Melbourne.

Robinson wanted a change of direction for his next musical and considered everything from Shakespeare to Biblical stories. Deciding the world didn't really need Hamlet the Musical right now, he returned to his childhood interest in archaeology. As an 8 year old, Robinson was somewhat obsessed with the story of Atlantis and chose to write a musical that would serve as a parable of contemporary society. Robinson read up on all the myths and fables surrounding the story of this lost city. He felt he needed to decide where Atlantis would have originally been located and then started constructing a community from the ground up.

Robinson describes his latest work, ATLANTIS, as an epic event musical.” His vision for this work is big … epically big. Although this upcoming presentation will be a concert version, it will enable audiences to hear all the music and then imagine the possibilities of a full scale production in the grand styling of The Lion King or Wicked.

Robinson describes his music as being very melodic, and much more complex than it may first seem. Growing up, he loved the music of Les Miserables and Phantom of the Opera, as well as all the Disney animated musicals, but he also listened to a lot of Tori Amos through his teenage years and top 40 music. So he feels his compositions have pop influences. 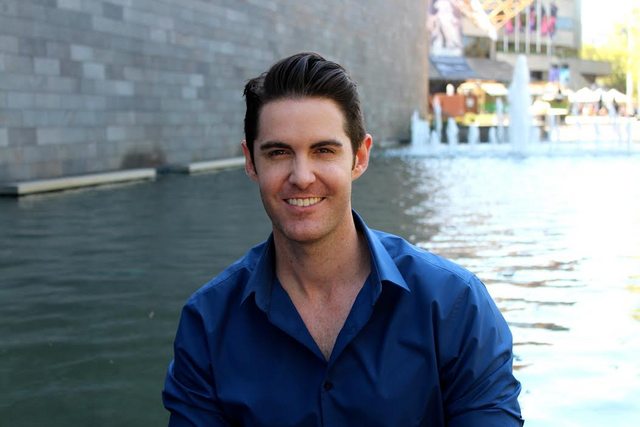 The first draft of ATLANTIS was workshopped at WAAPA in 2012. Later the same year, with assistance from the Australia Council and Power Arts, ATLANTIS underwent two readings in New York City with developmental feedback from Stephen Schwartz and representatives from Disney Theatrical Productions, Manhattan Theatre Club, Stuart Thompson Productions and The Araca Group. The musical was then thoroughly reconstructed, resulting in a second developmental workshop at WAAPA in 2013. Continuing their support of the project, Power Arts provided Matthew with assistance to conduct another New York based reading and Draft 7 of ATLANTIS was presented at Pearl Studios on Wednesday 15th October, 2013.

ATLANTIS – IN CONCERT will be Australia's only chance to hear all the songs from this musical before Robinson relocates to New York in late 2014. A stellar cast have been assembled for this concert event, including Gareth Keegan, Lucy Durack, Kellie Rode, Anne Wood, Bert LaBonte, Melissa Langton and Emily Langridge. All have given up their own time to support Robinson in this pioneering work. Lucy Durack says the quality of what she describes as an “uber cast” is testament to the strength of Robinson's work and reputation.

Durack first heard ATLANTIS when she attended the workshop in Perth during a season of Legally Blonde. She describes the music as overwhelmingly beautiful, and a classical sort of musical that is intricate and of interest to all ages. Durack says Robinson's work is lyrically clever, with beautiful melodies and harmonies; the sort of songs that stop people passing by in the hallway as Durack is rehearsing and cause them to buy a ticket to hear the rest of the concert. Not surprisingly, the first concert has sold out already. When Robinson discovered the concert had sold out so quickly, without even some of his own family and close friends being able to purchase a ticket, he decided to add a second concert on the same night. This will be the only opportunity to hear ATLANTIS in this unique concert. Robinson says there is “firm interest” from overseas producers in both New York and London. But for now, Robinson is just waiting to see the reaction from audiences here in Melbourne.

ATLANTIS is being performed at The Chapel off Chapel. One final concert has been added on Sunday 23rd February. Get your tickets quickly!

For tickets go to: www.chapeloffchapel.com.au 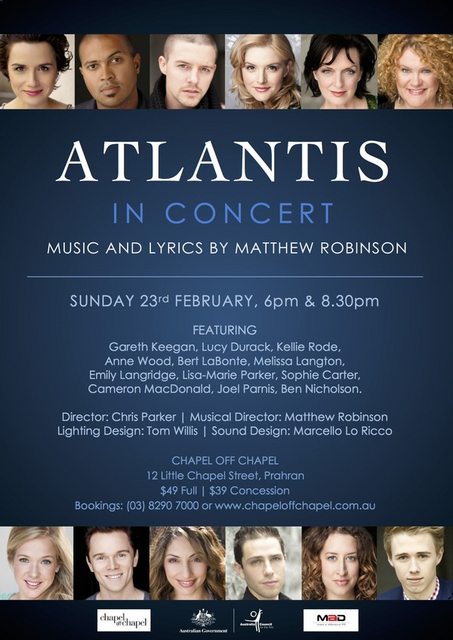 Staging Shows from Recent Memory – From Pro to Amateur

Ever Been Tempted To Stand Up?