THE ACCLAIMED TRIBUTE TO THE QUEEN OF COMEDY 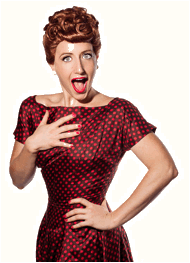 Glen Street Theatre is excited to present Everybody Loves Lucy, the critically acclaimed musical portrait of the queen of comedy performed and co-written by musical theatre star, Elise McCann.

Lucille Ball won hearts as TV’s biggest star in I Love Lucy – the most popular sitcom in American history. Wacky, fearless, and totally endearing, she broke the mould for how women could behave on TV.

As she conquered the entertainment industry, Lucy was joined every step of the way by her real-life and on-screen husband Desi Arnaz. While her own marriage fell by the wayside, she was credited with saving the marriages of millions of Americans.

"Helmed with a pitch-perfect performance by McCann, and subtle direction from Helen Dallimore, Everybody Loves Lucy is equal parts amusing and bittersweet. A fitting tribute to the paradox that was Lucille Ball.” – The Daily Telegraph

EVERYBODY LOVES LUCY
By Elise McCann and Richard Carroll

Win a double pass to Grease