Melbourne needs a new a Moomba monarch and this lady has been waiting impatiently in the wings for years. Comedy cabaret legend Dolly Diamond has reached that point in her life where success can no longer be measured by money alone. Only genuine adulation and a bonafide title will satisfy the beast of desire in this power-hungry diva. Dolly has waited and watched as some well-known lovelies have stolen the crown from her – Denise Drysdale, Dame Edna Everage, Kate Ceberano – even Lucy Durack! And of course this year’s Queen, Pallavi Sharda. 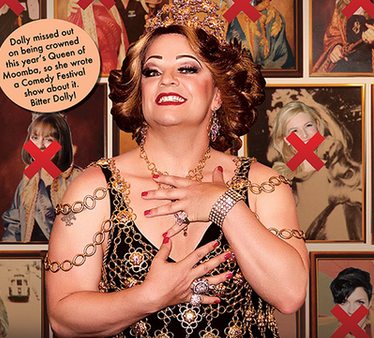 Dolly Diamond enjoyed a hugely successful season in January this year of UNDER A BIG TOP at the Melba Spiegeltent, home of Circus Oz. A premier event for the 2015 Midsumma Festival, the show played to extraordinary crowds and earned Ms. Diamond critical acclaim.

Hedger & Nicholson are a musical theatre writing team made up of Nick Hedger and Ben Nicholson who met at the Western Australian Academy of Performing Arts (WAAPA). Their first show, Hook Up, won the Short+Sweet Cabaret Festival Fringe Development Award in 2013 and recently played as part of the 2014 Melbourne Fringe Festival to rave reviews. As well as their current work on two brand new musicals, the pair founded and run Home Grown, the highly praised monthly event that encourages and supports Australian Music Theatre writers.

Get in fast for last minute deals

An Officer and a Gentleman to close early

Shepherd kicks off Belvoir’s 25A Season for 2020