David Harris shares his story before heading off to New York

After a sold out and extended season at the Hayes Theatre in Sydney, David Harris is touring his acclaimed cabaret show Time Is A Traveller to Melbourne, Brisbane and Newcastle. As one of Australia's most acclaimed leading men, this is the story of how a country kid ended up in some of the biggest musicals in Australia and on stages around the world.

Demonstrating his talent both on and off the stage, Harris has written, produced and directed the show, as well as designing the set and lighting. The end result is a charming ninety minute show during which Harris shares his career highlights and lowlights. He delivers both laughs and tears, taking the audience through a diverse range of songs, from the Les Miserables favourite Bring Him Home to the lesser known Walk with Me from The Full Monty. Fans of Harris who are already familiar with his two albums will gain a whole new insight into these songs as he shares the personal background stories.

Usually cast as the romantic male lead, Harris shares a few songs with a leading lady of the stage. In Melbourne he will be joined by Amanda Harrison, suggesting audiences are in for a Wicked treat (despite the fact the pair never actually performed as Elphaba and Fiyero opposite each other – a minor point we will all happily overlook.) For his Brisbane show Harris will share the stage with Ana Marina and in Newcastle it will be Elise McCann.

Harris came to be known as a leading man of Australian theatre during his critically acclaimed role as Chris in Miss Saigon – a show that nearly destroyed him, as he openly shares during his show. Despite this, he delivers an incredibly powerful performance of Why God, Why. Taken away from the context of a physically and emotionally demanding eight show a week schedule, Harris can now enjoy the exhilaration of performing this powerful song. Harris adds he'll only perform songs in his own show that he genuinely loves – and this passion shines through. Of course there are many other songs Harris would love to include but if there is no point or connection to his story he won't add them – this is the art of cabaret compared to simply singing a concert.

Time Is A Traveller is a classy show that flows seamlessly. It appears to be incredibly well written and planned, yet feels genuinely natural and spontaneous.  I asked Harris how much is written and rehearsed, and how much of the show is left unscripted. Harris explained that he spends considerable time mapping out the show. Once he has the order of songs locked into place he then works out how to link from one to the next, adding in connections between the songs with appropriate dialogue. He writes out the prose of what he thinks he will say, but then relies simply on bullet points as his guide. The end result is a show that flows smoothly and allows Harris to respond to and interact with his audience. It is David Harris being David Harris. 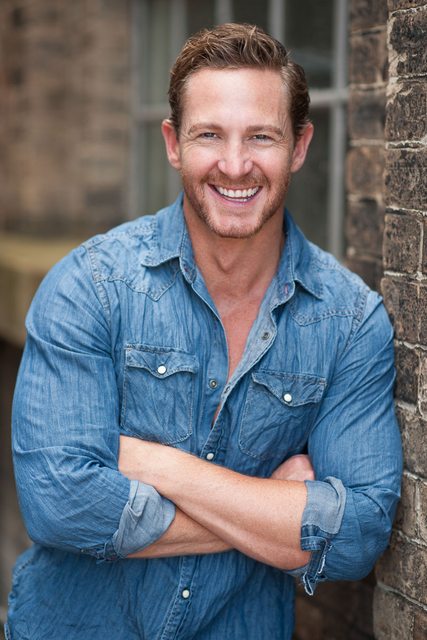 Harris says there is no right or wrong way to do cabaret, but this is the style that works for him and is what he recently taught to the participants of the Hayes Winter Cabaret Workshop – a two week intensive on how to do cabaret. Harris showed clips from his show to demonstrate what he was achieving through each song performed – for example, how This Is The Moment allows Harris to show his vocal range, whilst also ticking off several other boxes including his admiration for Anthony Warlow as a youngster, talent quests at the RSL and adding a good measure of humour. (I'm not giving anything else away – you have to see this performance live to really appreciate this wonderful moment in the show.)

As a self-confessed perfectionist, Harris modifies the show as needed, watching a recording of the performance to determine where certain elements can be improved or modified. He also responds to audience feedback and their expectations. After his opening night in Sydney, when asked why he hadn't included any reference to his role as Emmett in Legally Blonde, Harris was quick to add a refrain of What About Love for the next show.

Talking with Harris over a coffee in a Melbourne cafe, he's surprisingly relaxed for someone who has been spending his mornings working on the production of Time Is A Traveller before heading off to rehearse for the Victorian Opera season of Into the Woods, only to return to continue working on the production elements of his show into the late evening. It's a huge workload – but being busy in this industry is not something to complain about and he wouldn't want it any other way.

Harris' latest venture is setting up a Youtube channel. It will provide an avenue for his loyal fans from various parts of the world to keep in touch with Harris once he leaves for the bright lights of New York in September (for what is currently an undefined period of time.)

Time Is A Traveller is a must-see for fans of David Harris or simply anyone who enjoys high quality cabaret. Don't miss it!

Melbourne: August 6th to 8th at Chapel Off Chapel

David Harris in Time is a Traveller

Miss Manners, or Miss-Mannered? The (Not So Fine) Art of Theatre Etiquette

Kids Week at Charlie and the Chocolate Factory 4-8 December