Creating Original Theatre One Crowdfunding Campaign at a Time

The Crowdfunding phenomenon has pushed many projects off the pages of a script and onto the stage.  Crowdfunding cuts the traditional decision makers out of the picture and allows the audience (including the producer’s mother, partner and biggest fans) to decide if a project sees the stage. It’s a process that allows new theatre producers to create work and therefore creates diversity in the stories being told.
One current project seeking funding on the Pozible platform is Akio! The play is the first production from new company Sounds of Blue Theatre Co and is an original play written by Matt DeHaas.
Akio is a school kid who gets bullied and he copes with this by hiding behind his Gameboy, until one day he finds himself sucked into his video game world. Suddenly Akio is not the distance controller who can press the ‘esc’ key whenever things get tough, instead he has to confront the monsters, the villains and his own fears.
There is no dialogue in the play, instead the actors use movement, dance, light and sound to tell Akio’s story. It’s a bold idea but these are the sort of projects that can come to fruition with the help of their supporters through crowdfunding. 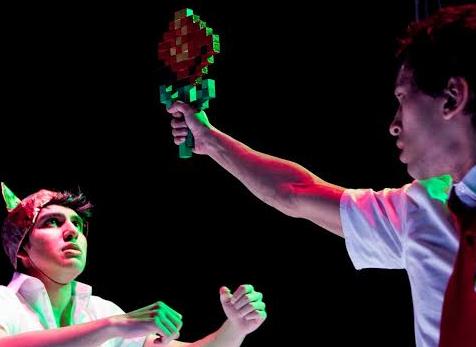 Pictured above: A production image from Aiko!

Sounds of Blue’s artistic director and director of Akio!, Sascha Hall considers the play is story for adults and children alike. It’s directed towards child from 6 to 12 years old however parents and adults will enjoy it just as much.  “Akio! sends a strong anti-bullying message. We are very fortunate to live in a time right now where the issue of bullying is at the front of many minds. Akio! tackles these issues directly and hopefully will open a dialogue between parents and children after the show.”
For the collaborators of Akio! they consider they have learnt just as much from the play as their story’s hero. Sascha says “we discovered Akio! through a wonderfully creative and collaborative process and it was during this process, Akio! helped us discover who we are as emerging artists. We are incredibly excited to share Akio! with a wider audience and its through crowdfunding we hope to be able to do this, should we reach our target.”
As for the exclamation mark after Akio’s name? Well, why not!

And the winners are….. 2013 Theatrepeople People’s Choice Awards

The Mistress of Mayhem Comes To Provocaré.

Man in Chair Presents All Shook Up