Could Vimeo be the new way forward?

Imagine paying just $6 to see a critically acclaimed cabaret show written, produced and performed by one of Australia's most loved leading men of musical theatre. A funny and poignant show voted the Best Male Cabaret  in the 2014 Theatre People Pro Choice Awards? Well now you can. David Harris has released his cabaret show Time Is A Traveller not only on DVD but also on Vimeo and for just $6 you can stream the full show and watch it as many times as you like in 48 hours. That's quite a bargain really.

Harris normally videos his cabaret performances for his own personal archival purposes, but when bumping into Chapel Off Chapel for the Melbourne season of his show Time Is A Traveller, he had an idea to film the show with two cameras instead of the usual single camera. This second camera would give Harris the option to possibly create a DVD recording to give the show “a digital life beyond the live performances”.

Harris admits it was actually an impulse decision, but once the recording had been completed he then decided to continue with the idea to produce and release a DVD of the live show. However, Harris has taken his production skills one step further and released the show on Vimeo. 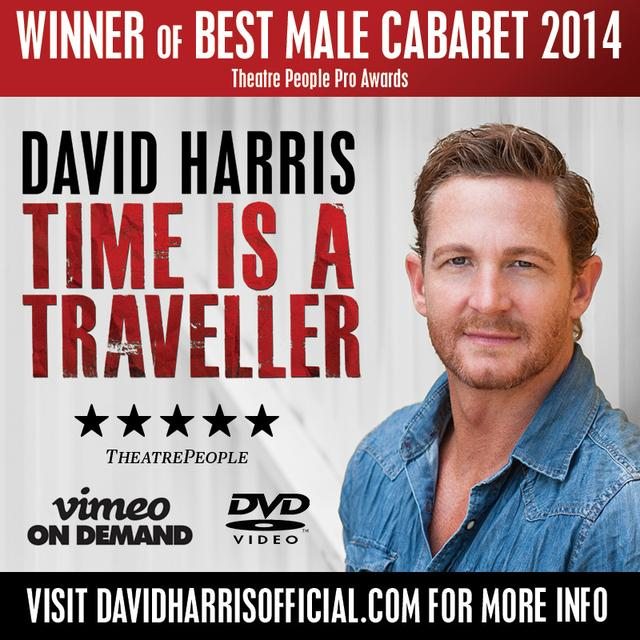 Harris had already self-produced and released two audio studio recordings but this was his first venture in anything visual. “I understand the movement for instant access to tv shows, movies, etc. Mobility and entertainment is becoming our 'norm' with many shows being watched on iphones and tablets, so I thought I would challenge myself, again, and learn how this medium can be used in my life and profession.”

“I wanted to open up my audience to as many people as I could, so making it accessible on a variety of platforms was my objective once I decided to go ahead and work on a visual recording of the show. I am constantly wanting to learn more, so I then started researching how to make this possible and importantly, viable. After all, it has to be profitable, like any business, otherwise the effort would be better used lying on a beach. I buy most of my music and TV shows now online and stream it, unless I really want the box in hard copy, so the Vimeo streaming concept was of interest to me and Time is a Traveller. It also opens up the show to be viewed worldwide.” 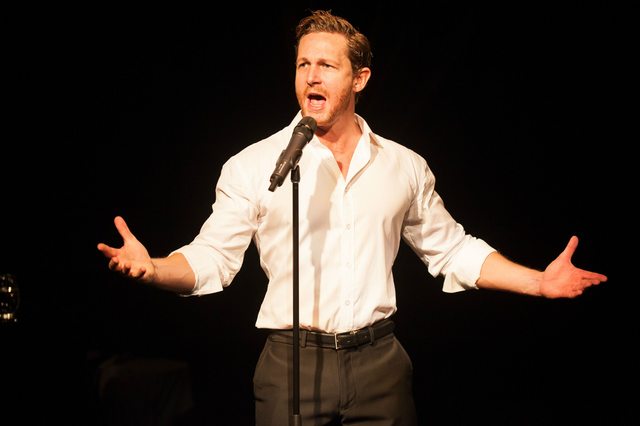 Harris has loyal fans from many corners of the globe but his Time Is A Traveller show only had seasons in Sydney, Melbourne, Brisbane and Newcastle. Needless to say, many of his fans missed out on the opportunity to see the show. Obviously a recording of a show is not quite the same as seeing it live, but it does allow the material to reach a wider audience. It also allows fans who enjoyed the show to see it again and for those interstate to see the Melbourne-only performance of 'As Long As You're Mine" with Australia's original Elphaba, Amanda Harrison.

Of course, there were challenges to be faced and according to Harris, the biggest challenge facing a performer interested in releasing their show via digital media is funds. Other obstacles to overcome include coordinating all the elements involved in the production, filming, editing, art, design, manufacturing and marketing. Harris looked after all this whilst immigrating to New York, which meant dealing with the time differences between countries.

“I am a hands on kind of guy, so it was hard splitting my focus to be on Australian Time is a Traveller project and launching my US career and the focus, dedication effort need to be aimed here in its initial stages. Luckily I had a very helpful team behind the project doing their jobs well. My advice to other performers is to get a solid team around you that you respect, and above all whom respect you, your time, your money, your career, your image and your focus. If they don’t, move on. I certainly have dropped people whom have not helped foster my dreams or aligned with my work ethics. It is important for all performers to become business people, not just artists.”

Harris encourages fellow performers to learn about the business side of the industry, “YOU and only you are responsible for your career: take charge, hire people who are aligned with you and willing to hop on your bus. Be pleasant, courteous and ask for help. Those that become a speed bump or road block, drop them as they are ultimately detrimental to your business. It should not be personal, it is business and performers have only themselves to bring the money in, so be the CEO.”

“Essentially it is about producing a product that is of interest to an audience, remains true to you and your style of performance and of the live performance that you gave, whist making it profitable and sustainable. It is a balancing act and somewhat of a gamble. But if you never venture out and try, you will never know. I would rather regret trying than regret never trying.”

While there is always the risk that the show will be downloaded then shared illegally, Harris hopes there is enough respect for what he is trying to do. After all, $6 is only about the cost of a good coffee. Even cheaper if you watch it with friends and you share the cost.

“I am offering people to watch a show, in a very cost effective way, in the comfort of their home or on their phone and ultimately wish for people to enjoy that,” says Harris.

With the release of Time Is A Traveller as both a DVD and available on Vimeo, it will be interesting to see if any other performers follow the lead and also release their shows. We can always hope!