Come From Away recounts the true stories of events surrounding 9/11, when 38 planes with over 6,000 passengers were stranded in the remote town of Gander in Newfoundland (a tiny island in Canada, for those without a map).

The premise of this show may not sound like your run-of-the-mill musical, and for good reason – it definitely isn’t. Writers Irene Sankoff and David Hein visited Gander in 2011 and were told numerous tales of ordinary people with extraordinary generosity. The thousands of stories they heard of this momentous event in history have been transposed into a 100-minute musical, told by 12 talented performers.

The musical is powered by an intimate eight-piece band that serves as an additional character for the production. Ian Eisendrath’s music supervision and arrangements weave the audience in and out of multiple stories and places with no intermission. Masterfully, the ‘buttons’ of Come From Away’s score are kept to a minimum. Besides the opening number ‘Welcome to the Rock’, ‘Screech In’ and the ‘Finale’, there is no time for audiences to applaud. One can assume that this is done to allow audiences to stay within the many stories being told, making this a unique piece of storytelling.

Director Christopher Ashley has created a ground-breaking musical that puts the 12 actors through their paces as they become the diverse characters through simple, sleek costume changes – the switching of a jacket, or the use of a hat coupled with physical movement makes you believe there are more than the 12 on stage. Beowulf Boritt’s scenic design turns wooden seats into planes, bars and outlooks, aided by Howell Binkley’s smooth lighting transitions. It’s clear that Ashley wants audiences to switch on their imagination, instead of painting by numbers.

Under the careful supervision of dialect coach Joel Goldes, the 12-strong cast brings an international array of characters to the stage, which is entirely representative of the global reach that was 9/11.

Douglas Hansell brings a grounded performance to the characters he plays. Gene Weygandt as the big-hearted mayor, Claude, offers warmth and a consistent figure for the town. Teddy Trice has fun with New Yorker Bob as he overcomes cultural shocks well outside his usual life experience. Joseph Naim dishes out some social commentary on xenophobia through the character of Ali. Phillip Lowe and Katrina Retallick conjure up loveable sighs and cheers through their love-struck couple Diane and Nick. Zoe Gertz’s determinism is shown in pilot Beverly Bass and the hit song, ‘Me and the Sky’. No matter the story, the truth behind each one provides an insight into a moment that reached around the world.

Come From Away is a musical that manages to take a time of heartache and terror and show the kindness in humanity. This is something not to be underestimated. In short, grab tickets now for 100 minutes of joy that will leave your cheeks hurting from smiling.

COME FROM AWAY – SYDNEY SEASON DETAILS 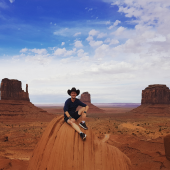