By Nick Enright and Max Lambert 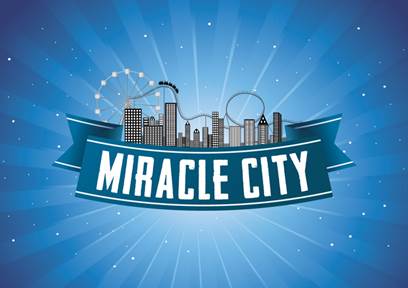 How far would you go to turn dream into reality?

Luckiest Productions in association with Hayes Theatre Co will present a brand new production of Nick Enright and Max Lambert’s musical Miracle City at Hayes Theatre Co in Sydney from October 17 – November 16 2014, with tickets going on sale to the general public on Wednesday, 16 July.

“We are honoured and excited to start working with the spectacular collection of acting and vocal talent that has come together for this production. It’s testament to the strength of the piece and the rapidly growing reputation of Hayes Theatre Co that we’ve been able to put together such a dream cast," said co-producer Richard Carroll.

Set in real time during a live-to-air American evangelical television show, Miracle City tells the story of the Truswells, a family with a dream to build a religious theme park, and the extreme lengths the patriarch Ricky Truswell will go to in order to make their dream a reality. Miracle City had its world premiere at the Sydney Theatre Company in 1996 to huge acclaim.

This brand new production will be directed by Darren Yap – The Serpent’s Table, A Murder is Announced, I Love You, You’re Perfect, Now Change – with musical direction by Max Lambert – Hairspray, King Kong, Strictly Ballroom – and choreography by Kelley Abbey – Fame The Musical, Xanadu: The Musical.

“I saw Miracle City in 1996 and I was profoundly inspired by it…..As one of the best Australian musicals ever written, it deserves to be seen again by a new generation of audiences,” said director Darren Yap.

“It’s a privilege for us to give 21st century audiences a chance to see this legendary piece, “said Lisa Campbell.  “Funny, moving and thought-provoking, with beautiful music and a razor-sharp script – it’s exactly the sort of musical Hayes Theatre Co was created to showcase.”