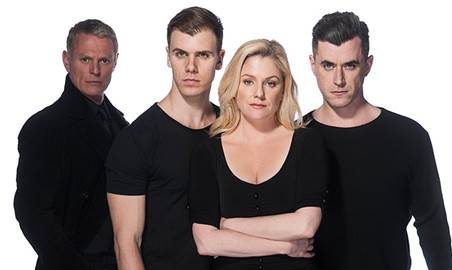 Enda Markey will produce Blood Brothers, one of the longest running musicals in theatre history at Hayes Theatre Co from February 6 for a strictly limited 4-week season.

Starring Helen Dallimore as Mrs Johnstone, Bobby Fox as Mickey, Blake Bowden as Edward, Michael Cormick as Narrator, Bronwyn Mulcahy as Mrs Lyons, Phillip Lowe as Mr Lyons, Christy Sullivan as Linda, Jamie Kristian as Sammy and Erin James as Donna Marie, Blood Brothers is the hilarious, provocative and heartbreaking musical that tells the unforgettable story of Mrs Johnstone who, when her husband walks out on her, leaving her penniless and pregnant, agrees to give one of her twin babies away.

Of playing one of the most coveted roles in musical theatre, star Helen Dallimore says: “Mrs Johnstone is a bucket-list role for me. She’s been played by some of the most extraordinary women in musical theatre’s history and I relish the opportunity to present her story in this intimate setting.” The twins, Mickey and Edward grow up streets apart, becoming best friends but never knowing the truth of their heritage. The prophecy that twins who are separated at birth will die on the day they find out their heritage brings this stunningly crafted musical to its shattering but inevitable conclusion. "

Blood Brothers is one of the best musicals ever written. Willy Russell's writing is, in turn, funny and heartbreakingly sad and I am thrilled to have gathered such an incredible team of actors and creatives to bring his beautifully written characters, and the wonderful songs, to life," said producer Enda Markey.

With a book, music and lyrics by Willy Russell (Educating Rita, Shirley Valentine), the London production of Blood Brothers ran for more than 24 years, winning every British "Best Musical" award along the way. It is one of only three musicals in history to play for more than 10,000 performances – the other two are Les Misérables and The Phantom of the Opera.

Produced by Enda Markey and presented in association with Hayes Theatre Co, Blood Brothers plays at Hayes Theatre Co for a strictly limited season and it is a rare opportunity for Australian audiences to witness this masterpiece with a thrilling cast performing in an intimate setting where it becomes even more powerful.

Enda Markey Presents was established in 2011 to produce the Australian tour of Side By Side By Sondheim starring (at various times) Rachael Beck, Geraldine Turner, Michael Falzon, Lucy Maunder and Jessica Rowe. In 2012, Enda Markey presented a gala concert of the show featuring more than twenty-five of Australia's leading theatre and television personalities, headlined by West End and Broadway superstar Ruthie Henshall. Since 2013, they have been presenting the International tour of Boublil & Schönberg's Do You Hear The People Sing? starring Michael Ball and Lea Salonga which has played to enormous acclaim in Shanghai, Manila and Taipei with numerous other productions (including Australia) in development.

Non-stop improv comedy onslaught, with something ‘fur’ everyone!