Being Mum … to David Harris

It never occurred to Robin Harris that her son would grow up to become one of Australia's acclaimed leading men of musical theatre. As the youngest of three children, David was raised in an ordinary family in Maitland, NSW. Robin says, David was a normal young boy, who had the gift of being nice to everyone.

The Harris' gave their three children the choice of any activities they chose – whether that was dancing, ten pin bowling, athletics or whatever took their interest. As a child, David had never expressed any interest in singing or dancing, although his sister took dance classes at one stage. Years later David complained to his mum that she had never arranged dance lessons for him, to which she replied, “That's because you never asked!”

The first indication of any interest in the performing arts, and indeed any sign of hidden talent, came when David was cast in the leading role of Superman in his high school musical Man of Steel. David was a skinny, awkward teenager who did well at school and claims he only got the role because he was the one willing to put up his hand to do it. It resulted in David being singled out by the other school kids and taunted for being both a nerd and a performer. The mocking taunts continued until David opened his mouth to sing … and then there was silence. It turned out the skinny and awkward-looking school nerd could actually sing … and sing very well. Robin still recalls the moment that silenced the audience – followed by the comments of, “You never told me David could sing!” His family hadn't realised he could sing either until that moment.

After this performance it was clear what the next step would be. David could already sing well, but would be even better with some singing lessons, so Robin arranged for lessons to further develop his talent. At this stage though, it still never occurred to Robin that David would go on to establish a career as a performer.

David went on to become popular in the Maitland area as a wedding singer, often teaming up with his sister, with mum Robin tagging along as their roadie. Robin enjoyed sitting at the back of the church and listening to the beautiful music. The two harmonised so well together they were once asked for the name of the tape they were playing. When they explained that there was no vocal tape, that was just the two of them singing, they were signed up immediately for another gig. Word of mouth and reputation soon spread.

Local talent quests followed and ultimately lead to numerous trips back and forth to participate in Sydney quests. Robin hoped they might earn a little bit of extra money from these quests and thought, “You never know where it might lead.” Even with that thought, it still never occurred to Robin that her son would go on to become an acclaimed performer. What was evident, however, was David's passion for performance.

Robin recalls his perfectionism as he prepared for each performance or talent quest. Everything had to be perfect, from the polished shoes or ensuring his hair was immaculate to getting the order of his songs just right. She describes it as being like a “procession of worry” as he ensured everything was perfect.

I asked Robin how attending all these talent quests impacted the rest of the family but she said everyone just accepted it. Travelling to talent quests was no different to taking his sister to compete in athletic events. The late nights arriving back at home from a trip to Sydney were exhausting, but it was what had to be done. She was the one available, so she accompanied him. Robin describes it as a very endearing time that she thoroughly enjoyed. She recalls they were often the last ones to leave an event because everyone would want to come and speak to David. She could see the spark in him to perform.

Although they enjoyed music as a family, the Harris' never attended the theatre. It was high school that first introduced David to the theatre world. David had always idolised Anthony Warlow, so Robin organised for the two of them to catch a bus down to Melbourne to see Warlow perform in The Phantom of the Opera. For Robin this theatre experience was a sudden revelation and introduced her to a whole new world she hadn't realised existed. The experience was quite overpowering, but when she turned to David to leave, her teary eyed teenager just sat there and refused to move. When they finally did exit the theatre David turned to his mum and said, “One day I'm going to perform on this stage.” Robin thought, “I hope you're right but I can't see it happening!” She knew he had talent but didn't think he would be up to the standard required and just didn't imagine it was possible.

Robin and her husband were back in The Princess Theatre for the opening of The Boy From Oz when, true to his word, David appeared on the stage of Melbourne's The Princess Theatre. It remains a very special and magical moment in her life. She remembers watching David being given bunches of flowers and wondering if this was always going to happen and how much she'd like those flowers!

Making the decision to enter into the entertainment industry meant David had to quit his original career path and leave the university course he commenced in architecture. Robin said they discussed this as a family but ultimately it was his decision and they would back him completely. They knew music would always be a part of his life but David had the vision to do something special. Musical theatre was the genre he fell into and enjoyed.

It wasn't always easy though, and Robin is well aware of the rejections and knock-backs that are a routine part of this industry. As his mum, Robin says she would pick him up off the floor, but couldn't change what had happened. Her advice to him was, “If you want the rainbows you have to put up with the rain.” She said he learnt to be philosophical about his work, not get overly stressed by the rejections and to look out for the next opportunity. In hindsight, Robin feels the talent quest experience probably helped David to develop resilience. On the long drive home from a talent quest they would have a post mortem in the car of what happened and why he didn't win. She feels that helped him to work it out of his system and to prepare for the next one and move on. Robin certainly knows how hard David has worked to achieve his success. She describes it as lots of slow steps where he has fallen down, picked himself up, tried again and earned his place.  Throughout it all, she says David has always remained humble and respectful of others.

As parents, the Harris' raised their children to be grateful for what they had and to treat others the way they would want to be treated. She is thankful that all three of her kids have grown up and succeeded in what they have chosen in life. When Robin is asked by someone on the street, “How is David going?” she admits to having moments when she wants to remind people that she does have three children! David's oldest sister is also musically gifted and involved in amateur theatre. She was a good guiding light for David and assisted him early in his career. Robin says both his sisters are very supportive of David and she doesn't feel there is any sense that one child is any better, or more special, than the other as they have all chosen their own paths and as their mother she feels she has treated them all equally.

Even now, after all the successes and accolades, David still surprises her. In his most recent performance, his own cabaret show Time Is A Traveller, Robin was amazed to discover how many people had travelled from interstate and overseas, saying, “Why on earth would anyone come all the way from Singapore just to hear him perform?”

Robin does keep close track of her son's career, keeping copies of everything he has ever done and anything written about him. She is now up to scrapbook number six! Every now and then Robin brings them out and trawls through them, getting quite sentimental as she reflects on his journey so far. She has also started writing her own memory journal about her family, as a legacy for when she's gone. 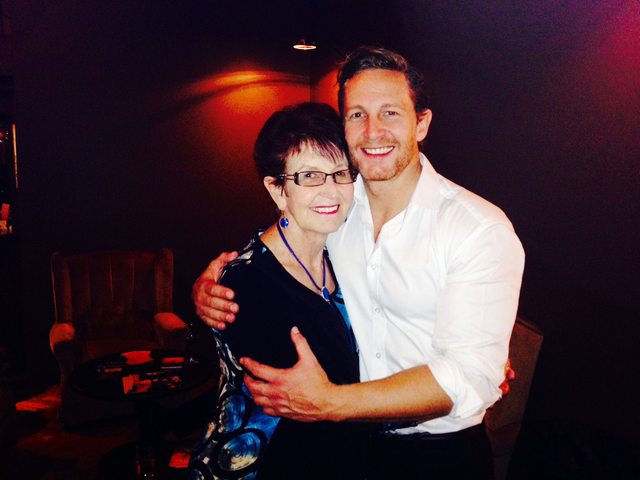 Robin acknowledges that having a musical theatre performer as her son as made her life a little bit special too. Looking back, it was his role as Chris in Miss Saigon that is one of her favourites as it evoked so much emotion. There are other special moments;  the tears being wiped away by audience members after his heart-felt rendition of Bring Him Home in his cabaret show, the Sydney media people who said Time Is A Traveller was the best cabaret show they had ever seen, and the audience members who commented his concert with Lucy Durack at the Taronga Zoo was the best zoo concert they had ever attended. Robin holds on to those comments and the warm fuzzy moments, feeling truly blessed by the knowledge her son has impacted other people in such a positive way.

So is Robin his toughest critic or his biggest fan? She said more likely his biggest fan, as there really isn't anything to criticise. She can't even recall David ever receiving a bad review.

The next chapter of her son's life will see David heading off to New York. She knew he would always end up doing this and fully supports him, but admits she was hoping he'd stay around a bit longer before leaving. David has taught Robin how to use an ipad so she is hoping her new access to the internet and social media will help her to feel connected with what he is doing during his time overseas – although she says it will never replace a good cuddle! She and her husband do plan to fly to New York – but won't go just to visit David. It will only be to see him perform in a show there!

Robin's advice for other parents who have children interested in performing: it depends on the person, but take every opportunity you can get because some opportunities only come around once. Put your heart and soul into it and you can't go wrong. Be truthful to yourself. You will enjoy life much more if you realise just how lucky you are and the talents you have – whatever that talent would be. And do something with that talent. Don't just let it go. Appreciate all the experiences and opportunities you have.

So what will this mum be doing on Mother's Day? Well she knows it won't be spending time with her son as he's currently in Melbourne. She'll probably catch up with her daughters but expects it to be a simple day. In fact, Robin says if she hears from each of her kids on the phone she'll be happy. David … don't forget to call your mum.