Being Dad to Matthew Lee Robinson

Matthew Lee Robinson grew up in Rockhampton, Queensland, the youngest of two boys. His father, Glyn, says Matt was always interested in music from a very early age and credits Matt's musical talent to his wife, Barbara who is a music teacher. Matt was a very intelligent child and Glyn feels it is this combination of musical talent and high intellect that Matt has now turned into something his father describes as being very unique.

When he was about 8 years old the family was on a camping trip and Matt created a Mother's Day gift from leaves shaped into a cross onto which he wrote poems about his mum. Glyn thought the gift showed a thought process quite incredible for a young boy of that age, and says Matt's talent for writing and thinking has just continued.

That “writing and thinking” has resulted in Matthew Lee Robinson winning the Pratt Prize for Music Theatre, the UTAS Stephen Schwartz Songwriting Award, the Gilbert Spottiswood Churchill Fellowship and most recently the $100,000 Australia Council Music Fellowship. Matt has also been nominated for Helpmann Awards.

Having the opportunity to collaborate with Stephen Schwartz on Matthew's own compositions of Atlantis and Happy People is quite an achievement. I asked Glyn if it surprised him that his son had worked with such huge names in the musical theatre industry to which he replied, “It doesn't surprise me. I've always had a great belief in him.”

Raising a family in Rockhampton, the Robinson family didn't travel to see any live shows in Brisbane, but did regularly go to the local theatre company, which Glyn said was of a very high standard. Matt become involved with this local theatre group, performing the role of Enjolras in their production of Les Miserables when he was just 15 years old. Glyn feels that being in a Rockhampton possibly gave Matt more opportunities than if he'd been in a large metropolitan city.

It was clear that Matt had musical talent, but Glyn was well aware that the entertainment industry can be a difficult one in which to succeed. Glyn spoke to his son about these concerns when Matt was in his early teens, but says Matt was so focused on music, theatre and singing that it was quite obvious where he needed to go. His parents gave Matt their full support to achieve his dream. They made sure he had the best training possible, and when he completed high school, Matt went straight to Perth to complete a three year degree at the Western Australian Academy of Performing Arts (WAAPA.)

Matt's initial interests were more about performing, but Glyn feels the talent for composing was always there. Matt won the National Rostrum Voice of Youth Award for public speaking during his final year of high school. Matt had to write and present speeches and Glyn feels Matt's talent to compose music is linked to this ability to think and write outside the square. It is now in composition that Matt has really found his passion.

Glyn was in the audience of Matt's premiere concert presentation of Atlantis, describing the work as “absolutely brilliant.” He says Matt keeps rewriting and rewriting it because “that's what happens Dad,” but Glyn thinks what he heard on that night was just magnificent. He adds that if Atlantis opens in New York he'll be in the audience for opening night! Matt is about to move to New York, which Glyn agrees is where he needs to be for the next step in his career.

It's clear that Glyn is a very proud father, declaring, “I don't know what the rest of the world thinks about him, but I think he is probably one of the most humble successful people I've ever run across. He has no pretention, nothing that says “I am better than anyone else,” – he just loves what he does, loves to perform, loves people, loves to entertain people, and the fact that they love it – and they do – has not inflated his ego. Humility can get you a long way.”

I asked Glyn where this humility comes from – was it something Matthew was taught from his parents? Glyn says it's hard to say and he's not sure if it's something you can really teach – he feels Matt was just born with it. (I suspect perhaps Matthew has seen this same humility modeled in his father?) 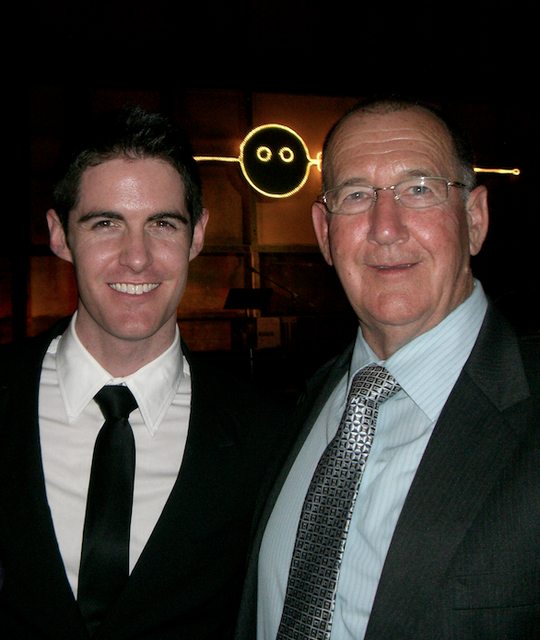 It's true though. Matthew Lee Robinson is one of the truly “nice guys” in the industry and has a huge respect from those who want to perform his music. At the recent Home Grown event at Chapel Off Chapel, the performers showcasing his music were cast members from Les Miserables, Grease and Wicked. Lucy Durack and John O'Hara had literally just finished their evening performance of Wicked and rushed to Chapel off Chapel with less than fifteen minutes to spare before needing to sing.

As for the future – Glyn feels Matt has great things ahead of him. He says Matt has an incredible work ethic. Glyn raised his boys to believe “if you work hard and keep your focus, don't lose your dreams and don't let anyone steal your dreams, you can do just about anything.” Glyn knows focus is important and describes Matt has being incredibly focused. Glyn says he really admires what his son has already achieved in his life, but knows there is a lot more still ahead.

As for Father's Day – the Robinsons are delaying their celebrations for a week. They'll all be traveling to Hervey Bay the following week to spend time with Glyn's 94 year old father.

As our conversation comes to an end, Glyn finishes by saying he hopes I get to write a lot more about the successes of his son in the future. Matthew's latest musicals Atlantis and Happy People have been developed across Australia and the U.S. with mentorship from multi Grammy and Academy Award-winning composer/lyricist Stephen Schwartz and representatives from Disney Theatrical Group, Manhattan Theatre Club and Ambassador Theatre Group. With big names like “Schwartz” and “Disney” already behind him, I'm sure we'll all be hearing a great deal of the successes of Matthew Lee Robinson in the future.

Next to Normal Production Photos