I’ve just sat down at a table in the middle of a bar and started sipping a glass of absinthe. Around me, stunning waitresses in sequined flapper dresses welcome other guests, and a smartly-attired man (who gives me the impression he’s the bar’s host) is introducing himself to some young women across the room.

I barely have time to take another sip of my drink before an announcement is made for all patrons holding an ace playing card (I’m one of these patrons) to move out of the room and towards a rather dubious-looking elevator. Following instructions, I now have to fix a white Venetian mask over my face, and I’m suddenly feeling like I’m Dr Bill Hartford, Tom Cruise’s character in the truly dreadful 1999 film Eyes Wide Shut. I also need to be cognisant of the fact that once on that elevator, I must remain silent until I return to the bar later on.

Once on the elevator, its operator addresses the sea of white-masked patrons, who’ve now filled the space. He delivers a message that turns out to be the paramount theme of the evening I’m about to experience: “Fortune favours the bold”.

The elevator door opens. I’m right at the front, so am the first person directed off by the operator… Or so I think. Before any other patron has the chance to disembark, the shabby doors of the elevator close. I’m alone, and I walk forward a few steps to find a dark, empty room that resembles a hospital ward of the early 20th century. I start to explore my surroundings.

Over the next three hours, I witness a murder by strangulation, I stumble into a room and find a couple sharing an intense and intimate encounter, and find myself standing by watching a young man mime to Peggy Lee’s 1960s hit, Is that all there is? The evening culminates with my masked acquaintances and I observing a banquet, and I won’t give any indications as to what it was that I witnessed there. 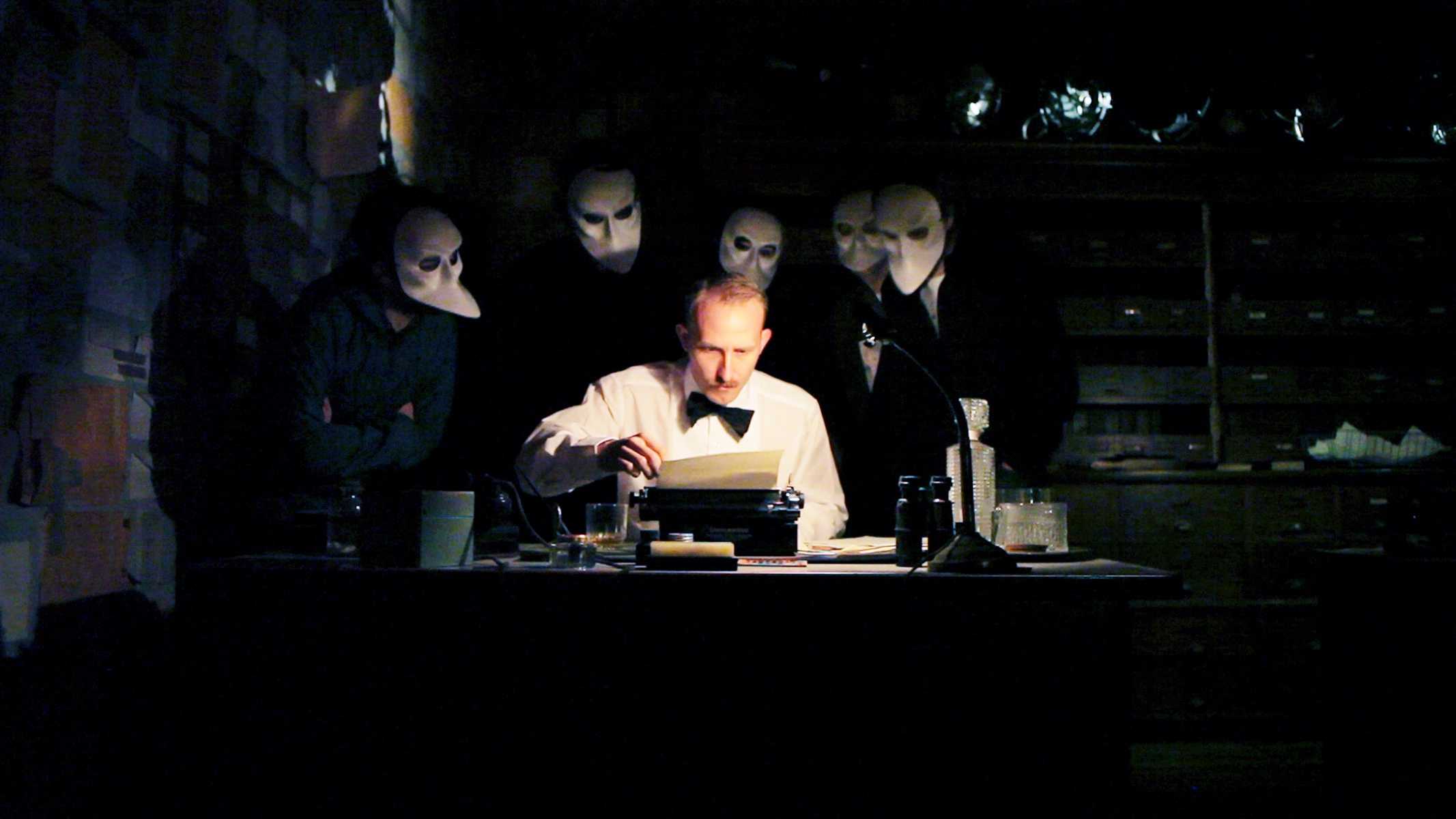 Above: A promotional image for Sleep No More, with audience members pictured in masks.

This is Sleep No More, an immersive theatre experience offered nightly in a specially-converted, 1920s-themed, six-level space in New York City’s trendy Chelsea neighbourhood. It is bizarre, it is creepy, it is intense, it is exciting and it is truly one of the most memorable theatrical experiences I’ve had to date.

The concept itself is not entirely new. Interactive theatre has been around in various guises perhaps almost as long as theatre itself. But immersive theatre – the idea of giving the audience member some sort of role to play in the performance, perhaps allowing them to roam and tailor the way they view the performance – is a concept that has gained increasing popularity in recent years.

Soon after Sleep No More opened in NYC almost four years ago, it became one of the hottest tickets in town. Emma Stone, Justin Timberlake and Dita Von Teese have been among the highest profile guests at the ‘McKittrick Hotel’ (Sleep No More’s home in Chelsea). The show was even featured in a 2011 episode of hit US TV series, Gossip Girl. It’s continuing to draw in strong crowds today, and many ticket holders find themselves returning for several further encounters with Sleep No More.

So what is it about an immersive theatre experience like Sleep No More that makes it so alluring? Most appealing is probably the participant’s heightened control over their theatrical experience. Once inside the McKittrick Hotel, you’re left to wander the rooms of the premises at your own pace, spending as much time in particular quarters as you like, and skipping over rooms and character interactions of less interest.

Rather than going in and being presented with a linear story, everything is simply what you make of it. There is a story – Shakespeare’s tale of monarchical conflict in eleventh century Scotland is dragged far forward into the roaring twenties – but any familiarity, or lack of familiarity, with that story is unlikely to dictate how much you enjoy the experience.

If you’re drawn to a particular character, you have the ability to follow that character through the hotel and witness their own story unfold. I have a vivid memory of witnessing the Macbeth character’s murder of Duncan, and chasing him furiously up several flights of stairs to witness his encounter with Lady Macbeth that followed.

This is a ‘Choose your own adventure’ experience for theatregoers. Sleep No More’s producers, the UK’s Punchdrunk Theatre Company, are pioneers in this field of theatrical experiences, and have been staging these kinds of performances since 2000.

Above: The promotional image for The Surrealist Taxi.

While the experiences referred to above are offered in overseas cities, immersive theatre activities have also been offered locally. DreamThinkSpeak (yet another UK-based company) bought its Don’t Look Back production, inspired by the Greek myth of Orpheus and Eurydice, to Perth’s old Treasury Building in 2008. In April and May of this year, The Silence Came was staged across three levels of a 165-year-old inner Sydney house. That season was a sell-out and producer Mongrel Mouth, a company dedicated to site-specific, immersive theatre, has said their next production is currently in development.

It will be interesting to watch how much Australians awareness of, and appetite for, immersive theatre grows over the next few years. How great an interest do you think there is for this kind of production locally? Could an immersive theatre production become a major long-term attraction in one of our larger cities, similarly to the way Sleep No More has made a long-term home for itself in NYC? Is this something you would like to see more of at our major arts festivals? Could MONA’s Dark Mofo, still in its infancy, provide an immersive offering as part of its annual program, or could Sydney heighten the profile of immersive theatre via an addition to its hugely popular Vivid festival?

Time will tell whether immersive theatre in general strikes a chord with locals, but in the meantime, if you’re planning your theatre activities for overseas travel, do consider adding an immersive theatre experience to the itinerary. For the record, I’m fortunate to be returning to NYC in December and have secured my ticket for another incomparable evening at Sleep No More, though this time I’ll be sure to skull the absinthe!

Do you hope to see more immersive theatre in Australia and around the world? Let us know by commenting below, or share your experiences with this type of performance!

Francine Cain: Waiting for something to go wrong