Baby and Johnny are ready for some Dirty Dancing 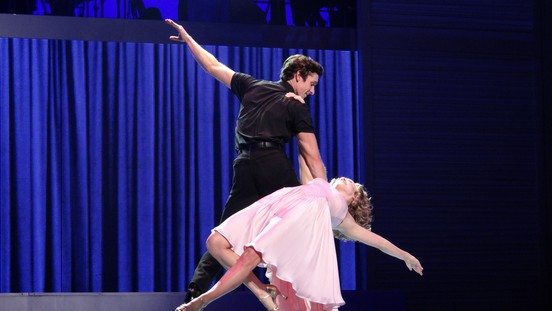 Returning for its 10-year anniversary, the revival musical of Dirty Dancing has come home to Sydney – the very place that sparked its international success. Dirty Dancing first performed at the Theatre Royal, Sydney in 2004; where it toured around Australia, New Zealand and Europe (including the West End). It broke records by becoming the largest advance sales in European theatre history.

Based on the 1987 film, the musical production features songs from the movie’s soundtrack, including "Hungry Eyes," "Hey! Baby," and the iconic "The Time of My Life." Set in the summer of 1963, Dirty Dancing tells the story of 17-year old Frances “Baby” Houseman, who catches the eye of the resort dance instructor, Johnny Castle, on a holiday trip with her parents and older sister. Caught up in the mesmerising, rebellious dance moves and pounding rhythms, Baby learns some major lessons about life, love and dancing.

Dirty Dancing, produced by leading theatre producer John Frost, is currently playing at Sydney's Lyric Theatre and will be followed by Melbourne’s Princess Theatre from 4 March 2015 and the Lyric Theatre, QPAC from 27 May. In addition to these announced Australian cities, a planned stop in Perth for August of 2015 was further detailed last Friday at the Sydney media call. 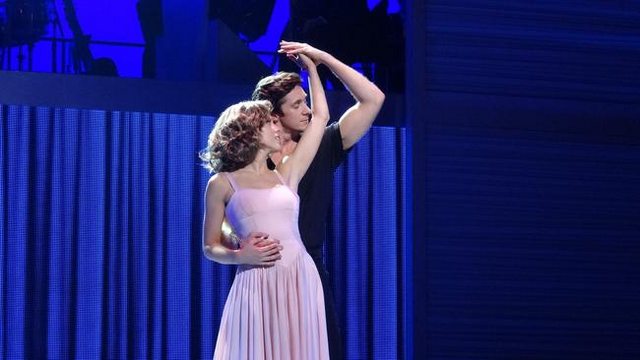 
The revival features both Kurt Phelan as Johnny (Singing’ in the Rain, Witches of Eastwick, Saturday Night Fever) and Kirby Burgess as ‘Baby’ (Hairspray, Grease, Sweet Charity), both debuting in their first professional leading roles. Both Phelan and Burgess have been widely recognised in the theatre community as hard-working and having their fair share of ensemble roles – but in this show, they are leaping from their places in the chorus to the iconic leading roles of this much loved musical production. When asked how they were feeling for opening night, both Phelan and Burgess spoke about how they felt both excited and nervous about it. They mentioned that they felt the pressure more than they had before, but they were equally thrilled to be bringing the show to a theatre audience, and to hear the reception for it.

When Theatre People commended Burgess about her well-known reputation in the musical theatre community as a triple threat, and asked her about the challenges of such a role – she answered that the test was playing a role so different from who she was as a person. Highlighting the fact that she had always been a stage-child, Kirby spoke about how playing Baby, an innocent and stage-shy character at the beginning of show, was definitely a different experience, especially in moments where she had to pretend to not know how to dance.

Additionally, when the curiosity of the famous ‘lift’ came into question, Theatre People had to ask Phelan about any lift disasters, and the amount of stamina needed by both parties to perfect the lift. However, whilst Phelan and Burgess acknowledged the physical challenges of the lift, they stated that the mental aspect was much more difficult – and that they both had to remain relaxed and ready in order to successfully deliver the lift.

The relevance of the tale of Dirty Dancing also came up when Theatre People quoted Patrick Swayze’s description of the film as a “return to innocence”, rather than its perceived theme of the “loss of innocence,” where Phelan stressed the timeless nature of its story and why it continues to be met with open arms from today’s audiences. 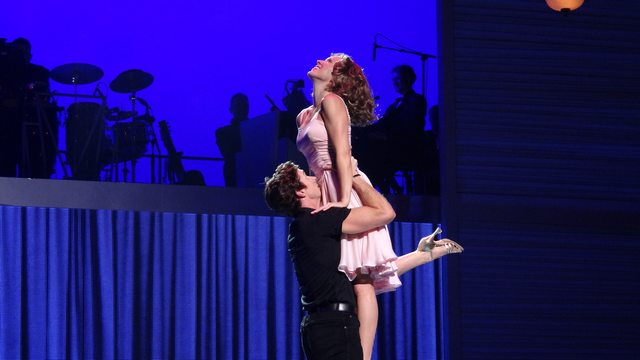 Reprising the role of Penny Johnson, following her origination of the role in Sydney 10 years prior, Nadia Coote has performed the character in both Australia and on the West End. In the middle of her break from the original Australian musical Strictly Ballroom, Coote articulated how fortunate she felt in being able to play both her dream roles.

“I’ve been so lucky for the chance to do this,” she says, “it’s not usual that you can originate a role and then do it again.”

Coote also spoke about why she continues to love playing Penny’s character. “It’s kind of nice to play that character…it is a traditional love story – but it’s nice to bring that political element because it challenges the audience.”

Whilst Dirty Dancing sticks to its roots, Coote also mentioned how its small changes mean it can remain fresh for a modern audience. “It’s a hybrid version of the show, so it’s nothing like what I’ve done in London or Australia before. It means I get to be challenged in the role…I’m being pushed in a different direction”.

With direction from West End director James Powell (who directed the original London production of Dirty Dancing, and whose theatre credits span from Les Miserables to Miss Saigon), it will be something that the Australian public haven’t seen before.

“For the people who have seen it, it’s going to be a different experience. And for the ones that haven’t seen it, I’m glad that I get to give my own interpretation of the role that I loved and did 10 years ago.” 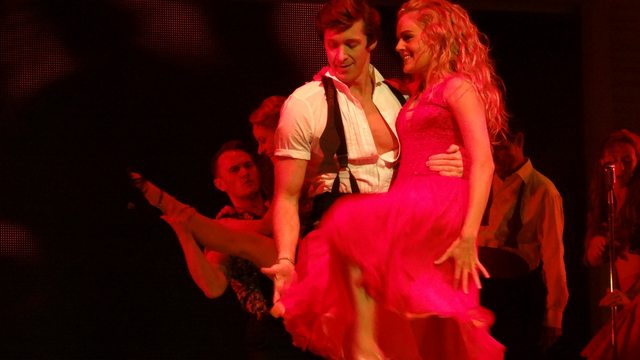 Pictured above: Kurt Phelan and Nadia Coote in ‘Do You Love Me?’ ©Debbie Zhou

Mark Vincent also joins this talented cast, where he makes his professional musical theatre debut in the role of Billy Kostecki, Johnny’s cousin. Following his success on the talent show Australia’s Got Talent in 2009, Vincent’s reputation as a classically trained singer as been embedded worldwide, selling in excess of 500,000 albums worldwide. Vincent detailed how the preparation and the rehearsal process differed from his usual training.

“It is very different from what I usually do…[but] this show brings out the versatility in me. To show that versatility to audiences is great because the audience can see another side to me.”

He also emphasised the obstacles with the transition of singing styles.

“The style of singing is so different!” Vincent continues, “Even when I was performing ‘In the Still of the Night’, I really had to hold back on some of the notes. Because in classical [singing], there is a lot of vibrato and phrases, it’s not really sung straight like contemporary music is.”

But also whilst challenging, Vincent described how the role of Billy remained rewarding as it allowed him return to his innocence (like how Swayze once described the show).

“The role I’m playing [Billy] really shows the innocence of a young boy because since I won Australia’s Got Talent, I’ve had to mature very quickly. But this show allows me to a boy…I get to have an Elvis hair-do as well!” Vincent laughs. 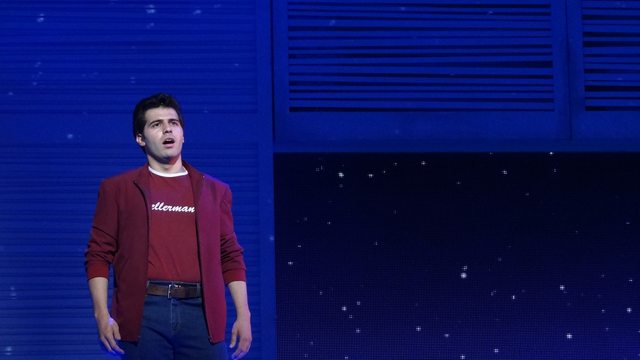 Pictured above: Mark Vincent performing ‘In the Still of the Night’ ©Debbie Zhou

The Sydney media call consisted of the musical numbers, “Do you Love Me?” “In the Still of the Night,” and the iconic “(I’ve had the) Time of my life”. From the few performances presented, Dirty Dancing seems as though it will be a fun and energetic show for both fans of the 1987 film, and newcomers to the show. 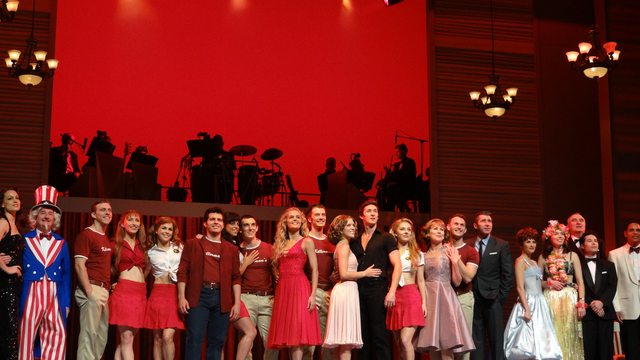 Pictured above: The full cast of Dirty Dancing at the Sydney Media Call  ©Debbie Zhou

L5Y: From finish to start